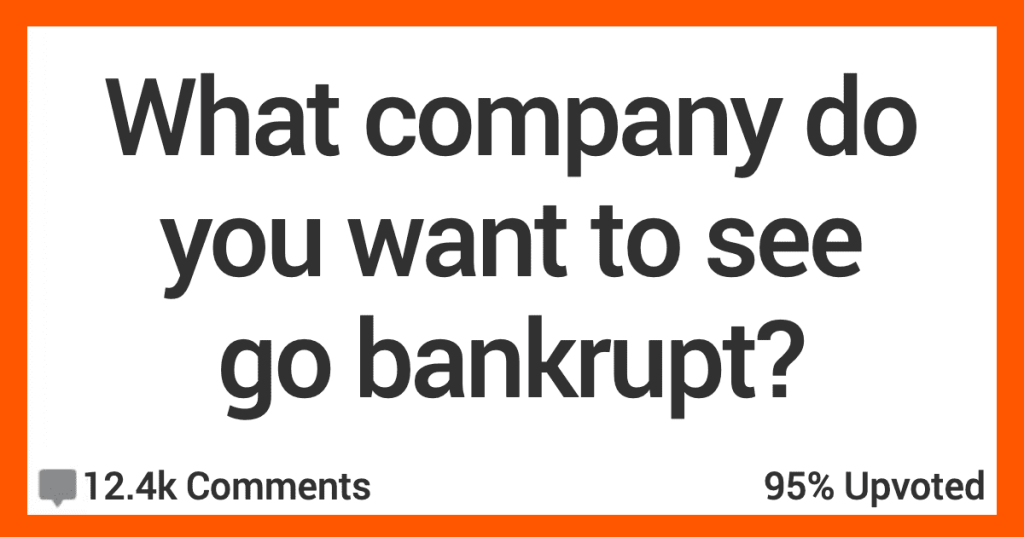 Today we’re going to dive into a serious conversation that is sure to be interesting and informative.

Because these AskReddit users didn’t hold anything back when they talked about the companies that they would bankrupt if they had the opportunity.

I deposited $750 one time and somehow they still cant find it 5 years later.

Even though I had the receipt for the deposit they still would not honor it.

F**k em and their mothers.”

“I think if you want to see the world burn, Deutsche Bank would be high on the list.

Also it would be well deserved.”

“The Church of Scientology.

There’s a Scientology establishment in my city that I frequently pass on my route home from work, and every day I go by I wonder how the f**k that building hasn’t been vandalized to hell at this point.”

I live up river from the Washington Works / Chemours (formerly Dupont) plant where they manufactured Teflon. They’ve detected C8 in the river water of an upstream tributary to the Ohio in my town.

I find the local effects of the manufacturing process alone to be absolutely crazy and then I remember that Teflon was sold world wide and these forever chemicals have contaminated the entire globe.”

Scan on your phone fee

Because We Can Fee

“My h**red for Comcast knows no bounds.

But they know they have me under their thumb because there’s literally no other option where I live.”

Small company. I’m usually not into schadenfreude but I would watch that boss burn at the stake.

They are one of the worst companies on Earth right now.

Look up the Nestle water scandal.”

The amount of damage that man has done to the UK, US and Australia should see him imprisoned for life.”

“BlackRock, beacuse they have too much power over lawmakers through their ownership of large segments of the economy.”

They are literally the most obnoxious, money grabbing company I know. Their commercials are stupid. They bought Time Warner for the media. They own HBO. HBO is failing because AT&T will not fund projects at the level needed to succeed.

Their accounting is 2 weeks behind when I pay them, so they always have more of my money because the auto-draft doesn’t recognize the payment I made 3 days before the auto-draft. They are the carrier who is farthest behind on 5G. The only reason I have them for my Internet is because Spectrum is worse.

I have to change between AT&T and Spectrum every 2 years to keep my Internet rate down. I hate them both, but I think AT&T stifles innovation more. They do pay my mother a big dividend though. Whoopee!”

“The Port Authority of New York and New Jersey.

I used to work for this company and the amount of shady back booking they do is crazy. One of the least things they do is severely underpay their workers, the last time one of my colleagues got a drastic raised was 6yrs ago.

His manager left and he got a ton of work load on to him with a promotion or a raise, HR literally wonders why everyone is quitting, old and new. It’s because the old don’t want to keep working past their retirement (and before the pandemic, we had a lot of seniors that stayed way past their retirement age), new employees are seeing that they’ll work 1-2yrs and move to a different higher paying job that leaves less work, and better benefits.

It’s super hierarchical it’s suffocating to work, the grunts do the work, s**ual a**ault gets pushed under the rug, everything feels like a frenzy.”

The short term rental market has had a devastating effect on both long term renters and people trying to buy primary residences.”