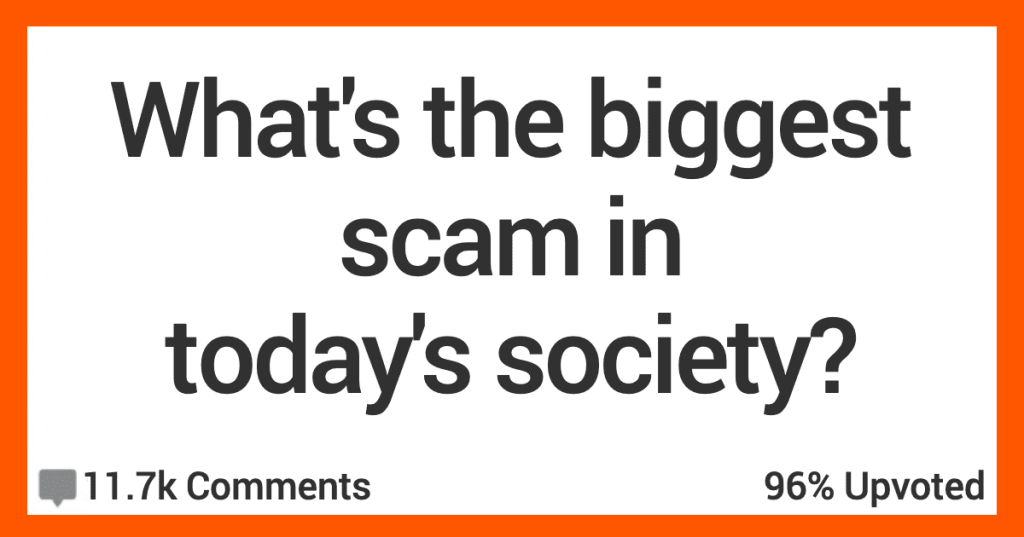 You always gotta be on the lookout and you always have to be wary of what’s going on around you these days.

Because there are scammers everywhere!

On the street. In business. On the Internet. EVERYWHERE.

And today we’re going to hear from AskReddit users about what they think are the biggest scams in today’s society.

“I had to replace my fridge and washing machines last year, after 25 years of sterling service.

The guys who delivered the new ones said I’d be lucky to get 5 years out of any fridge these days, maybe 3 for the washer, and I honestly don’t know how I’m going to afford to keep replacing things when I’m on a disability pension.”

“The Live Nation monopoly will continue to poison our cities with their sh**ty venues and gouged ticket prices.”

I took an abnormal psychology class in college once, and the professor was insistent that we needed the (new edition, $180) book, that we would be using it ALL the time. She actually held a raffle for a free one for a lucky student.

We did not open the textbooks ONCE all semester. Everything we needed to know was discussed on PowerPoint and made available online.”

“A certification in personal training takes a weekend.

Most of them have no idea what the fuck they’re doing. You’re better off spending a week doing your own research related to your goals and some trial and error.

Your body will tell you what’s too much, or when you have room for more. Just don’t ego lift and you’ll be golden.”

“Recycling labels on plastic items. So many single use plastics have a recycle symbol on them when in reality nobody will touch that s**t.

It’s way cheaper to just make new plastic 99% of the time compared to trying to process and filter out the contaminants of used plastic (if its even a formula that can actually be recycled).

I’m partially convinced the reason we have so much plastic waste as a society is this trickery making us think we’re actually recycling a meaningful amount of it.”

“In Canada, at least, cable/internet/cell prices.

Eastlink is purposely messing up my older model system to try and get me to upgrade. My TV and internet is $187 a month.

This is ridiculous. Cell phone isn’t even included in that.”

“Working 8-5 (with a hard hour for lunch, if that), still being broke and being told by management/company, that if you don’t perform, you will be let go.”

Hiring manager explained it to me best by saying, “it’s not that a degree is necessary but it’s a way to whittle down the number of applicants from 1,000 to 100.”

Are there good employees without degrees? Of course there are. But it’s not worth it to sort through a 1-inch stack of resumes to find it when you can do something arbitrary like education.”

My company recently increased yearly raises from 2% to 2.5%.

“The fact that technology was supposed to free us from the 40 hour work week, but instead people are now expected to do the jobs of 4 people or they have to just sit around, putting in their time like a prison.”

What do you think are today’s biggest scams?