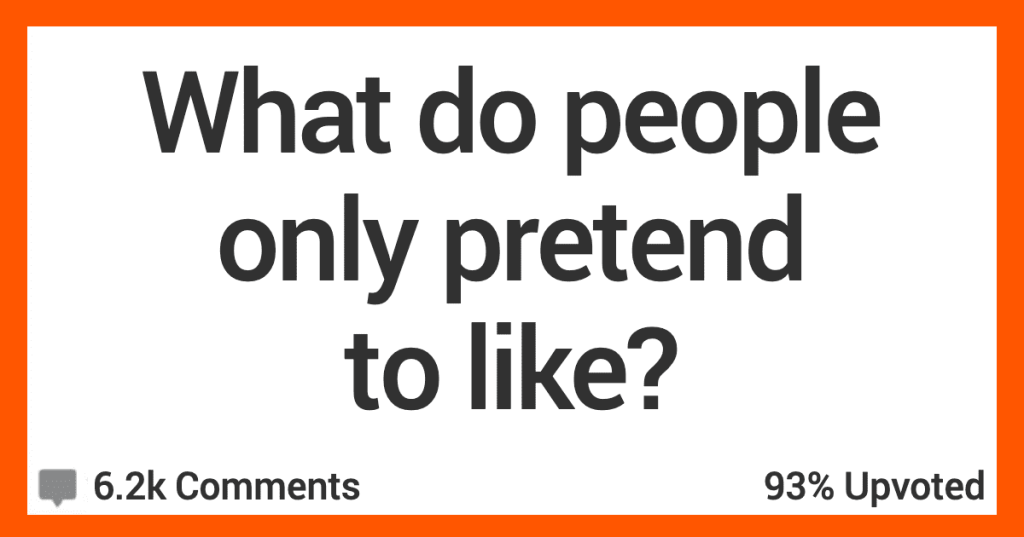 Do people out there only PRETEND to like things…?

I guess some folks definitely do for one reason or another.

But we’re gonna get to the bottom of that today!

“The pizza party at work for working 300 extra hours in a month to meet quotas.”

“I’m the most extroverted person I know and I’m perfectly fine with social interaction, but when I’m out and about running errands, just about the last thing I want is to run into someone I barely know and have to make small talk.

Unless you are a friend of mine or you at least actually have something specific you want to say to me, if you see me in public, here is the protocol: -observe me -recognize me -wave and smile if I look in your direction, I will reciprocate -go do literally anything other than approach me.”

No, I really don’t want to exchange gifts with Susan, because even if I put three things on a list under $20, the things that I will receive will always be shittier than the things I buy.”

“Drinking as they get older. It’s been a part of me for awhile now, but it’s become expensive.

Makes me feel like s**t and apparently beer bloats me now. If you get too wild it feels like it can take longer than a day to recover.”

I can’t stand them but I get invited and have to go.

No one likes those games.”

Everyone is talking s**t when they get to the dugout.”

“Little kids birthday parties. Your kid is 2, I have no reason to be there.

I came up with a system to never get invited to another one though. Get two gifts, a 5 lb bag of candy, and some annoying toy with lots of pieces. Let the kid open the candy first so they now know there is a 5lb bag of candy in the house.

Then they open the toy with tons of pieces that will drive the parents nuts. I never get invited to another one again. Odds are if the other parents at the party see this you won’t get invited to their kid’s parties too.”

I’m not saying that there aren’t good movies in the MCU but everyone treats every movie like they’re 10/10 masterpieces when they over rely on jokes and being quippy and every character is basically the same in terms of personality.”

It could taste like sweaty horse p**s but nobody would dare admit it after paying through the teeth for it.”

Not saying dead is better, but being alive right now is a f**king s**t show.

I was born in 1975, and I see the posts about, “Oh, y’all don’t know what it was like in the 80s or 90s.” We are weeks away from a city in the US having NO water at all. (Las Vegas, New Mexico), and the capital city of Louisiana can’t even flush toilets

If you don’t have a shred of existential dread, you are either a happy idiot, or in total denial.”

“I don’t believe for a New York minute that anyone actually likes bologna.

I think it’s just a relic from the ol’ pre-refrigeration preservation days that we only get because we think other people like it but they’re just too polite to tell us they’re as revolted by it as we are.”

“In Korea, people pretend to like afterwork drinking sessions. Work culture wise, you are not allowed to leave without the manager leaving first or dismissing workers, its seen as very impolite to do so.

But a lot of superiors of the companies are bitter middle aged men who hate going home to their families so they often “suggests” everyone go out share a meal and drink. To refuse will often mean a career s**cide where the worker is sent to “corparate Siberia” so to speak.

Afterwork drinking will often be bar hopping/singing rooms through the late hours and get you totally smashed on soju. Again most people can’t refuse when pouring rounds of drinks. Everyone sits there pretending to be happy and listening to shitty boasting.

Personally, I sat through a few of these but at some point I became too valueable to the company as a worker in my work output, they could not lose me. I started to just get up and go home early to my family, even though management was so pissed I was not staying around for the vice president.

I still remember the reception desk girl looking at me in desperation and whispering she wanted to leave too. Later I heard VP just was insuffarable bragging all night til like 2am. Such is often work culture in S.Korea. I dont know how common it still is since the younger generations are now more vocal about it.

Now that I am a CEO I told my workers I am not doing any afterwork drinking sessions unless they want it and organize it themselves. So far much happier people.”