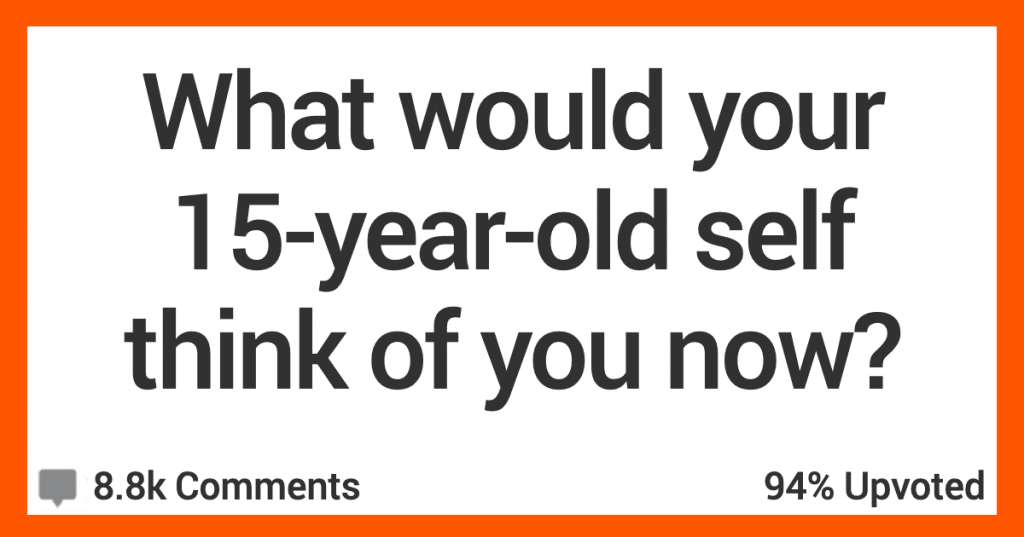 When I was 15, I thought my future life would be drastically different than it is now.

But you just never know what your path is going to be until you’re on it…and even then it can change in a heartbeat.

So you just have to enjoy the ride and do the best you can!

What would your 15-year-old self think of your life now?

Was homeless, a**sed in every way, depressed, angry, self-harming, wanting nothing more than to die but had a sister to take care of, couch-surfing, working in food service so I could eat, used high school as an escape from life even if I h**ed everyone there.

Now own my own home with a big yard and a pool, married to a fantastic human with 2 young kids of our own, have cupboards overflowing with food, can go to the store for pickles without overdrawing my account, have 2 awesome dogs and great friends.

I’m sure I’d also judge me for being a corporate sell out and wonder where the punk went, but all I ever wanted was a home and a family, and fought my a** off to finally have it.”

“I can actually order food from the restaurant without having a panic attack. I can talk and have conversations with everyone.

I try my best to live like a normal person that isn’t hindered by social anxiety 90% of the time.”

“Probably horrified I came to terms with my s**uality instead of pretending I ran a Britney Spears fan account because she’s “an ingenious artist” .

Ecstatic I left my country. Happy but not surprised that I chose a tech career.”

“She’d be shocked that it really doesn’t get better.

Still letting the same things that bothered you back then bother you 20 years later.”

“He’s still in here, rooting for me.

Proud but not yet satisfied.”

“As someone who dealt with severe insecurity as a kid, I’d be completely and utterly shocked at how blessed and happy I am right now in my 40s.

I am married to a beautiful, loving, caring wife, and I have 2 of the most sweet, fun, and adorable kids; I have a fun job where I earn more money than I thought I would, and I own a house.

While these are completely normal and common aspirations, I never thought I’d have any of these in my life. So I am pleasantly surprised and completely and utterly satisfied with my state.”

“I’m retired with plenty of money, a nice house, a beautiful wife and I pretty much play video games all day.

I’d say he would be pretty happy about it.”

“I’d probably be thrilled. I am somewhat the same, chilled life, no kids, no wife, no loans, but the difference is I live alone and I have money. I’d probably consider myself a role model.

In fact, I am pretty sure about it because I have this uncle I really liked when I was a kid and he was kinda similar, going out, drinking beer, playing CS at home till 3AM and in love with computers/IT.

I am somewhat like him now, but I earn more and I gave up CS, but I still play video games a little.”

“Actually dated in college and got married? Despite being told by those around me that no one would be into me for my hobbies and world views?

Making more than 100k? Despite being told I’d be a deadbeat by those around me (who make less than 30% of what I make now)?

Actually working in cybersecurity? Despite everyone around me saying there was no viable career in tech?

Living in New England instead of Satan’s sweaty a** crack, aka, the south east?

Still play video games and watch anime, despite everyone saying I’d grow out of it and dismiss my interests?

Still have long hair? Despite everyone dismissing it and saying I’d grow out of it?

15 year old me wouldn’t believe it and be incredibly jealous lol. I was motivated by pure spite for those around me.”

“I’d simply be shocked. When I was a kid, I thought I’d be a writer but I stopped writing sometime in college. I thought I would marry young and raise obedient Catholic children near my parents.

I moved to NYC after college, get paid more than I ever expected, married in my 30s, don’t want kids, and live a way more beautiful life than I could have dreamed of at that age.

I think 15 year old me would be impressed.”

“I think he would be very jealous of most of it but be a tad saddened that he doesn’t see his best friends from high school or have a gaming group for D&D anymore.”

“15 year old me would probably be jealous:

•moving into a house

But, I’m still depressed and fighting myself everyday. So there’s that.”