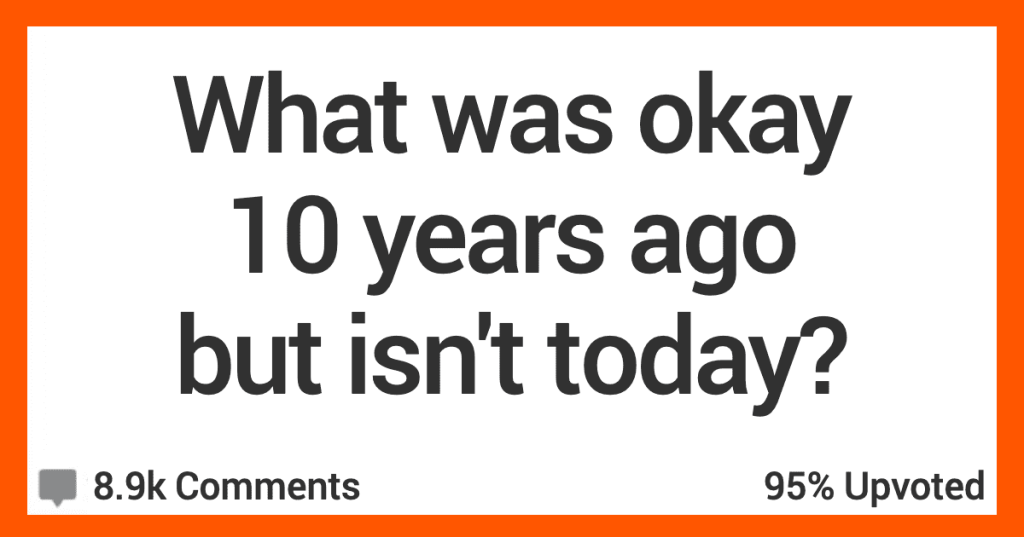 With the advent and explosion of social media, it seems like things come and go much faster than they used to.

Things that were acceptable just a few years ago and now frowned upon and people go out of their way to criticize and avoid them.

Let’s hear from people on AskReddit about what they think was acceptable 10 years ago but isn’t anymore.

I remember the days when the ads were around 5-10 seconds long and they only played like once usually in the beginning and end of a video.”

“Traveling to and through Russia.

It’s on my bucket list to go to south central Siberia like around the altai mountains, but now I have to wait out this d**n regime.”

My how the producers turned tables on that one.”

“Taking a pill at a party.

Wasn’t really “ok” but at least you had a much higher chance of waking up in the morning.”

“I notice a lot of video and audio recording by civilians, on top of governmental security surveillance, and it’s to the point where everyone must be prepared to explain and account for every action they take, thought they write, phrase they say, etc.

10 years ago people weren’t walking on as many egg shells in fear of becoming a meme lol, and if people noticed they were being recorded they sort of just stopped doing whatever they were doing.

“The ability to excuse one’s self from a topic they were ill informed on.

Nowadays, people are expected to have an opinion even if they aren’t knowledgable or informed on the subject.

You’re filmed and goaded into saying the thing the vocal group wants or you’re labelled.”

Had such a blast finding out what kind of bread I was.

Now I wouldn’t touch that company with a ten foot pole.”

“Using the word gay as an insult.

I mean wasn’t exactly 100% ok to do, but it was pretty common to the point where no one would really say anything.”

“Being kind to people.

“Political discourse in Canada and the USA.

The fringes were seen as the “noisy but unlikely to lead.”

Now they command so much of the dialogue, on all sides of the spectrum.”

It was probably pretty unhealthy back then too but felt more like a meaningful, if nerdy, subculture.