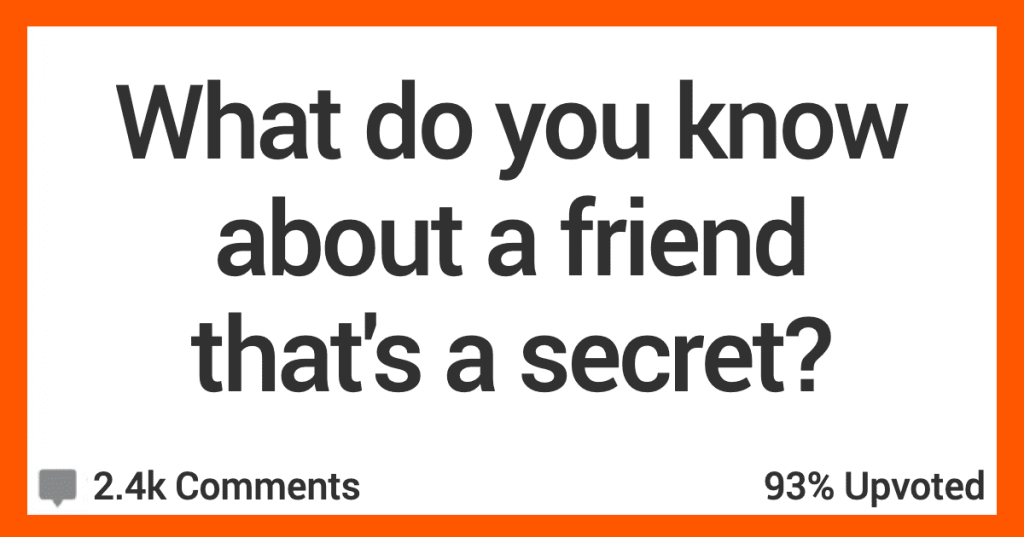 Have you ever known a secret about a friend and they literally had no idea that you knew about it?

Take a look at what AskReddit users had to say about these tricky situations.

“He has an older brother who was arrested for drug and weapons possession.

He’s told me he has no siblings.”

“Was passing by an odd part of town, and saw my friend’s van parked near a cafe.

Had to be his; two-toned, covered in stickers some of them for his band(s) past and present.

I wrote an unsigned note saying “The Universe Smiles Upon You” (yes, I’m a Khruangbin fan) and left it under his windshield wiper.

To this day he has it stuck to his fridge, no idea who penned it, and each time I see it I have a cheeky smirk to myself.”

“At my friends wedding, her mom and I got d**nk and s**ked freshly rolled cigars outside.

Her mom confided in me that my friends father wasn’t a good man. It’s weird because her dad is the greatest guy – spoils her & her brothers, spoils his wife. He’s also just a great human.

I tell her this and she says, nope, that’s stepdad. She packed herself and my friend up when my friend was just a baby and left the country they had lived in and moved here.

My friend has never once let on that her dad isn’t her bio dad. She’s also never said her mom was married before.

“I used to have a couple that bought weed from me separately.

Neither of them wanted the other to know that they smoked.

So they asked me not to tell the other. It was hilarious.”

“I knew he was so desperate for al**hol he was slowly drinking my booze and replacing it with water.”

“I am aware that he’s a drag queen.

My fiancé likes to watch drag shows, so me and her go to one every once in a while.

Upon going to one I remember seeing a great act by a queen with a distinctive tattoo of santa muerte on their left leg.

Weeks later my friend invites me to a gym session since he wanted me to teach him how to deadlift. Well, he was wearing shorts, and you know what I see? Santa muerte on his left leg.

We are gym buds and then I become more familiar with him. I know he’s In a bit of a conservative household so I try not to bring up the convo since maybe it’s not him. Out of curiosity I take a mental note of his other tattoos.

Then see him again on the stage weeks later and realize, yep, all of them match.

I know his secret, but it doesn’t change my opinion on him. I’m tempted to support him directly, but I don’t want him to get scared. So when I did see him, I always leave a cash tip.”

“Despite the social media addiction to showing off their glamorous life, they’re broke, in massive debt, and completely dependent on her parents to get by.”

His mom and aunt got chatty over tea and started talking about it while I was hanging around waiting for him to get ready.”

“That I know he’s drinking again, and it’s not just a couple beers here and there. He hides it because he knows the repercussions if goes back to being a full blown d**nk again.

I will walk away. I went through hell watching him self destruct the last time, and was still there when he got sober. I supported him the whole way, but swore I’d never do it again.

“They have an OnlyFans.

I didn’t want to know they could fit so much in their a** but what can you do.”

“That her husband cheated on her with ALL his guy friends on a camping trip by blowing them.

I’m a hairdresser. People tell me all sorts of things and sometimes I put two and two together.”

Do you know any secrets about your friends?

If so, give us some info in the comments.