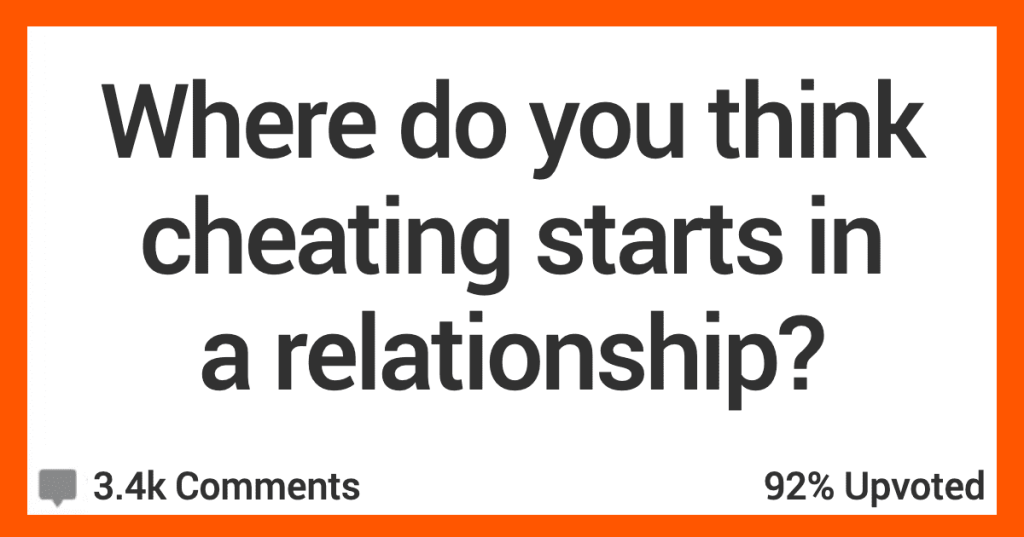 12 People Share Where They Think Cheating Starts in Relationships

When does cheating start for you?

Spending too much time together?

It’s different for everyone, right?

Take a look at what AskReddit users had to say about this.

“Cheating starts at lying, even by omission.

I am okay with private conversations, meeting people she wants to meet, going away on business trips or going out and coming back late at night.

But lying to me about it or about what happened? Or simply not telling me something I don’t want to hear ? That’s cheating.”

“First tier would be texting another dude in a non platonic way.

Second tier would be actually hanging out with this person behind my back and lying about where you were.

Third tier is any kind of non platonic physical contact, holding hands to f**king its all the same to me.”

For me, an ex of mine that would later cheat on me started a tinder profile in which she claimed she “just wanted to find friends” and she certainly found quite a few of them. Obviously, she didn’t just want friends.

It could be as small as reaching out to an ex to say happy birthday, but most people have the intent to do something well before it is executed.”

If you know they will be upset, it’s cheating.

If you have to hide it/lie/omit details, it’s cheating.”

“Entertaining another person and thus giving them the idea something (both emotional and physical/s**ual) could happen between the two of them.

I’ll even go as far and say if my partner texts, calls or meet up with someone but feels the need to hide it from me I’ll consider it cheating.”

“I think emotional is worse/hurts worse. Like drunk at a party and in the heat of the moment they kiss someone. We’re still breaking up but at least I understand it.

If someone I loved talked to someone and built an emotional relationship I think it would break me even without a physical part. Even flirting to me is fine, thats just how some people are.

When it becomes a regular occurrence with the same person it’s a problem.”

“When any sort of romantic investment in another person starts occurring.

If my partner was texting someone and saying they loved them in a romantic way that would be enough to end things.

Because at that point, they have made up their mind and have stated their intentions.”

8. Did they take action?

“I’d say having romantic feelings for someone else and following through on those feelings with the other person.

Crushes, fantasies, and whatnot happen all the time for pretty much everyone. The difference between cheating and being human is what you do with those feelings.

It’s all about intent and actions. Just having feelings is only natural.”

“To me, cheating just means breaking the rules.

I’ve been in all kinds of relationships, ranging from 100% strictly monogamous to completely polyamorous. Regardless of the type of relationship, we negotiate our specified boundaries, and breaking them is cheating. And there’s always a thin line with some behavior.

Even in a strictly monogamous relationship, I feel like innocent flirting is okay. However, hiding that from the other person would, in my view, constitute cheating. If i hide something from my partner, then it was not okay. If it was okay, i wouldn’t hide it.”

Now look, I’ve given a million ladies a million foot massages, and they all meant something.

We act like they don’t, but they do, and that’s what’s so f**king cool about them.

“It p**ses me off when people try to justify it saying “it was just a kiss”.

It’s all cheating, you made that decision and now own up to it.”

“If you wouldn’t feel comfortable with your partner doing it with someone else, it’s cheating.

If you wouldn’t feel comfortable with your partner flirting with someone else, it’s cheating for you to do it.”