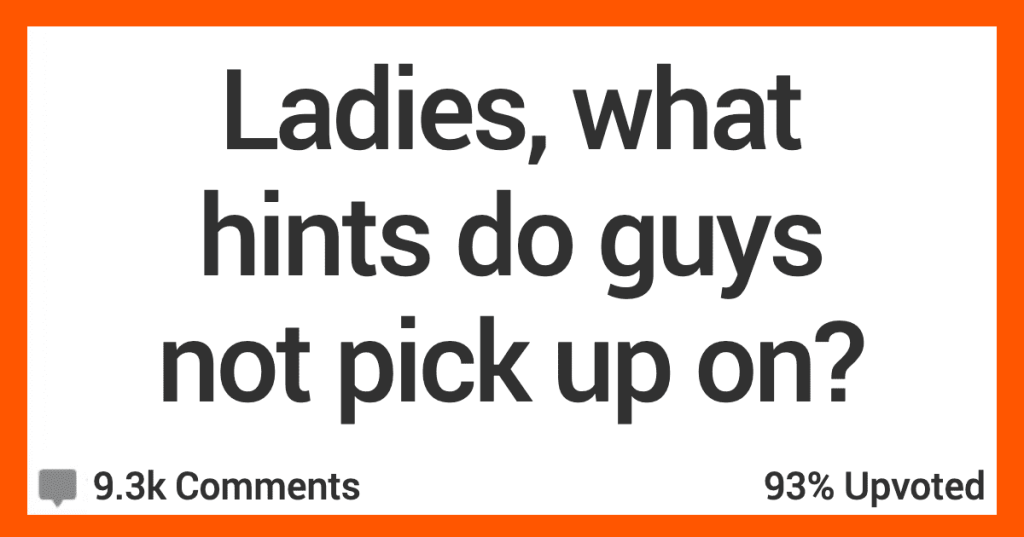 Guys…I don’t want to sound like a jerk…but you’re really blowing it.

I’m talking about how we keep NOT picking up on hints when ladies clearly lay them out for us.

“I’ve asked out 2 different professional acquaintances to get a drink or coffee (as opposed to Zoom/meeting room) to talk about their career paths and seek advice which is partially what I’m after.

Guess we just end up acting professional and it doesn’t work out.”

“Before we dated, I kept asking my fiancé his blood type and if he’d had surgery. Stuff like that.

I threatened to bring him back to my coworkers on my home planet as a shared snack, like you would bring fancy candy bars back after a vacation. All of this was intended to be flirtatious. I thought it was damning.

He kept responding with messages about cheese. I thought, this guy is either f**king clueless as s**t or he just doesn’t like me. Turns out, he was trying to get me to go cheese and wine tasting with him. He thought he could just text things like, “There’s a special cheese place in Sonoma I really like. They sell cheese and wine.” And in his mind I would respond with, “Let’s go check it out.”

F**king unreal. How did he think I would know to do that. I was trying to hit on him and he just kept talking about cheese.”

“A thing I’ve noticed I do when I’m into someone and we’re in a group setting, if something funny happens, I’ll laugh and look to them while laughing.

I think I read some psychology s**t about wanting to share the joy/connection with that person idk I forget exactly the reason for it.

So yea when someone laughs pay attention to who they look at I guess.”

“Lots of eye contact, complimenting them a lot, going out of you way for them, remembering small things about them, little gifts, finding an excuse to talk often…

Then when tell them I like them they’re stunned because they thought we were just friends. Sigh.”

“(High school ) Me ignoring them meant I actually liked them, never got the hint… how dare they!

Actually answer, I used to ask them (when I was feeling brave) questions that I TOTALLY knew the answer and then continue the conversation. E.G., when is the football game?”

Every songs I posted or sent to you, it has a meaning.

“I am currently chatting with a guy on a dating app. We’ve been doing casual conversations for a week or so.

He asked what I was doing this weekend and I said, “Nothing planned but there’s this great new wine bar I’ve been wanting to try.”

“I told him I had a cute bald cat back at the house, and he asked where my cat was when we got there.”

“I asked to hang out with him alone all the time. Flirted with him. Etc.

He wasn’t getting it. One night I was leaving this play thing, he was walking me out, and I ran back in and just said “kiss me.” He looked confused and laughed and said “Did you just ask me to kiss you?”

And came over and kissed my cheek. He told everybody about it and it was a big joke so I stopped hanging out with him.

Ran into him after we had graduated. He’s gay. Kinda made sense but you know.”

“Before I got with my boyfriend I said that I had a crush on him and was constantly flirting but he just thought I was joking.

When we first met I was always asking him if he want to sit with me but he said no thanks I like standing until I offered him fries.

The whole friend group was understanding the hints except him. We’re together for a year now and to this day it’s still a running gag.”

“”I love this place because you are here.”

I loved going back to my home country, usually to visit one specific person.

He never got the hint.”

If I touch your arm or your hand while I’m speaking to you, I like you. If you make me laugh, I really like you.”

What hints do you think guys OR girls never pick up on?