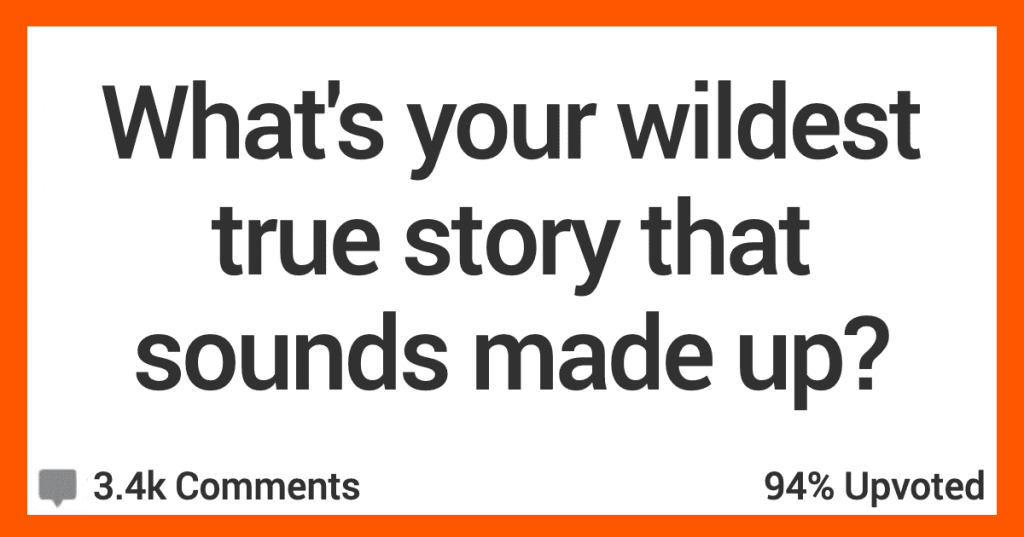 12 People Share Wild True Stories That Sound Made Up

Alright, my friends, it’s time to get WILD.

Because we’re about to hear from AskReddit users about stories they have that sound made up but are totally true.

Read on to see what they had to say!

“Mine is when I was in high school I lived out in the countryside of Central Texas.

I was just kind of bumbling around on the property and my mom’s little chihuahua was tagging along. I heard a bird, saw a fast moving shadow, and threw my arm out, slapping a hawk out of the sky as it tried to get my mom’s chihuahua.

Cut my arm pretty good, but saved that little rat of a dog. The chihuahua went on to pass away at a smooth 19 years old.”

“When my dad and step-mom met, my dad swore he’d met her before, but couldn’t remember when or where. Eventually, he decided he’d seen her in Cody, Wyoming, the town where he grew up. She swore she’d never even been to Wyoming (she’s from Oregon and that’s where they met).

Several years later, after they’d been married a while, step-mom mentions to her mom that my dad swears he met her in Cody, but she’s never been there.

She submitted the story to a local magazine for a Valentine’s Day contest one year and won a trip to a resort.”

“I was almost drowned by a pod of dolphins while surfing at Salt Creek, Orange County, CA.

“First time I ever s**ked pot a police helicopter hovered above me and my friend and hit us with the spotlight.

They were looking for someone else apparently because they immediately moved on.”

“Was in Vegas for a work thing. I was not happy about being there because it was a tough time in my life, money was really tight and Vegas is the last place you want to be when money is tight.

I was telling my buddy about it and he says, “I’m going to pay pal you $150. Go play the poker tournament at the Venetian at night. You can drink for free and hopefully you last long. If you win anything, pay me back, if not, no worries.”

The second night, I went off to play some craps alone one night because I did not like the work people and did not want to hang with them.

“I took my VW to the dealer to get some work done. The service rep at the counter was so hungover (possibly still intoxicated) that he couldn’t handle completing the paperwork.

He told the tech that I was a VIP, specifically “Britney Spears’s brother” and that he owed me a favor, so the work was on the house and they just never did any paperwork, didn’t charge me a dime, did the work, handed me the keys, and away I drove.”

“I went jogging one night and came across a lady laid out face first. No heartbeat. Started doing CRP.

Never saw another person was able to call 911 while doing CRP. Kept at it twenty Minutes till FD got there. She made a full recovery. They said CPR that long has a 95% fail rate.”

“I got trapped in a ski resort cafeteria overnight when an avalanche took out part of the resort and the access road.

At least we had plenty to eat and drink, though.”

“I broke my skull and didn’t realise until I was like “hang on I’ve got a dent in my head”.

I went to the doctors and they were like “yup, you have fractured your skull” and showed me this CT scan of a massive crater in my head.

Still to this day wondering how the f**k I did it.”

“I got grabbed by plain clothes cops one night while biking home. Random drug search. I had my backpack full of p**n mags a friend had been borrowing, so that was pretty embarrassing for 17 year old me.

In the middle of the search, cops in uniform rush in and arrest the plain clothes ones, who were apparently fake cops hustling people for drugs and cash.

So I had to show my p**n-pack to them as well, and I had to testify against the fake cops in court, telling the entire room about my p**n-pack.”

“I used to be a nanny. We would go to a local river on hot days.

Well once the 4yo lost her pink croc sandal and my god, was she DEVASTATED. Why? Aside from crocs being the pinnacle of four-year-old summer fashion she had put a very cool bluey charm on it. We searched for the shoe for the better half of an hour with no luck and so we left.

We went to get ice cream to soothe the harsh sting of grief and forgot about it…UNTIL about 2 weeks later we were at a different park upstream from lost croc river and the oldest pointed out some trash caught in some branches at the edge of the river. Being kids they went to poke at it and what do they find?

The pink croc. Bluey charm and all. How the hell it got 3 miles upstream I have no clue. We figured an animal or something but that was one of the weirdest things to this day.”

“In 1987 my Dad and his buddies were at a bar in the small town of Fermont, Quebec town way up north in Canada.

For whatever reason they each signed their names on the 10 dollar bills they had, joking that it’d be funny if one day they got the bill back as change somewhere else.

Fast forward to 1992 my Mom and Dad move to Vancouver during some rough economic times where he got laid off from his job, he ended up doing trade school and got a job as a mechanic for a little while before getting his old job back and moving back to his hometown.

Vancouver is on the exact opposite side of Canada, about 5500 km away from Fermont. They end up going to dinner one night and he gets 10 bucks back as change, he turns the bill around, and there’s his signature.”

Lay some good ones on us in the comments.