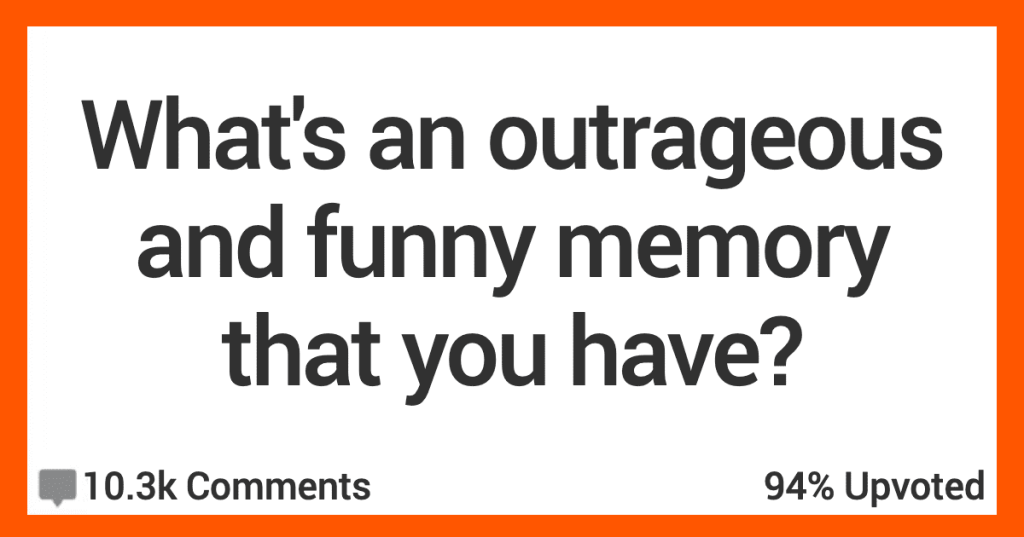 12 People Shared Funny and Outrageous Memories They Have

Are y’all ready to get absolutely WILD today?

I sure hope so, because we’re gonna hear from people on AskReddit about funny and outrageous stories they have that are sure to make you laugh and shake your head.

1. What are the chances?

“I tripped and fell at the same corner outside Subway 3 different times years apart and the same guy tried to catch me every single time.”

“”Me being black does not mean I am good at basketball!”

I said before lazily throwing the ball backwards over my head for a 3 pointer.”

“I was driving a friend home to Indianapoilis from Holy Cross in South Bend.

We got pulled over for speeding and the cop asked me “Son do you know how fast you were going?” to which I replied with a straight face and no sarcasm “Well my cruise control was set at 88 so I’m guessing somewhere in the vicinity of 88?”

I’ve never seen such a confused look on a person’s face. He proceeds to ask if I can step out of my vehicle and into his so he can talk to me while he writes me a ticket. I comply and as he’s writing me up he’s explaining to me how he had to do his Sherrif training in Indianapolis.

He said that the one thing that amazed him was how fast locals drive esp on I465 and he understands why I’m conditioned to do so. Soon as he’s done with the ticket he turns to me and says “So here’s the deal, you’re the first motorist to ever admit to me you knew you were speeding so I’m gonna cut you a break.

If you can make it back to Indy without getting another ticket I won’t turn this one in, but if you do you’re getting 2′” I slowed down for the rest of the drive.”

The cashier couldn’t break his $50 so I paid for his coffee with my stuff. He thanked me, we jabbed about me being “late” To school and I noticed the tattoo on his neck and we joked about bad decisions.

Two weeks later I get caught in a speed trap and who sticks his head in my window. And he went, “coffee girl!” And I went “tat neck!” And got let off with a finger shake.”

“When I was a kid, probably 13 or so, I came home from school one day and I swung my key around on the lanyard and threw it at the door, because I was ninja fighting something invisible that’d be vulnerable to a single key on a string. The key actually hit the keyhole and just plopped in there.

I was alone, so nobody would ever know that I actually was a ninja. Nobody has ever believed me, except my wife but she didn’t care at all. I don’t work as a ninja today. Unfortunately.”

I was skiing in the Alps with some friends and we were off piste doing some jumps and stuff. I was at the back of the group and fell and twisted my knee (not quite) landing a jump. Managed to get myself a bit lost as a blizzard set in and I couldn’t see s**t.

Carefully scrabbled around on my dodgy knee for a bit and thought I was about to end up in a fair amount of trouble. Then, out of the snow appeared my purple angel. A purple shape coming out of the blizzard, which as it got closer appeared to be an upright purple cow on skis. Turns out, it was the Milka chocolate mascot, a guy dressed in a purple cow costume on skiing about the hills dishing out chocolate.

He skied right up to me and said “Hey man, you ok? You want some chocolate?” He then skied back to the piste with me and took me to the nearest bar to get a beer. Guess who else is in the bar! My friends who were getting increasingly concerned that they’d lost me! Milka man dished out some more chocolate to everyone and skied off never to be seen again.

Thank you purple cow angel, you saved me that day and gave me chocolate!”

“I once pulled up at a red light where a cat was sat by the side of the road.

When the green man came on, the cat got up and crossed the road!”

“I was handcuffed and brought back to school in 10th grade because someone called the police on me for kidnapping.

This was back in 2011-2012ish when being random was the “cool” thing to do. I had a friend who was much smaller than me and younger looking, and we used to handcuff ourselves to each other and walk down the hallways at school to be funny.

We had a spanish class together that we used to skip regularly, and one day we decided to skip it and walk around the neighborhood across the street from our school while handcuffed to each other for the lols of it.

About 30 minutes after leaving school, we get stopped by police who tell us someone called to report a pedophile kidnapping a child. They realized very quickly we were both in high school, but they still cuffed us and brought us back to school, where my sharpies got confiscated because kids used to sniff them during class and in the hallways.

“I moved to a new city and figured I would go for a drive, get the lay of the land.

At a stop sign trying to turn right, looking left at traffic. See my chance and turn right without looking. A pedestrian was crossing in front of me and I hit him, not super hard but hard enough for him to kind of roll up on my hood.

He got off and stood up. I rolled my window down and apologized but he was kind of like Eric Idle in National Lampoon’s European Vacation. He kept apologizing, saying it was his fault, just a flesh wound, etc.

I decided my sightseeing tour should come to an end after running someone down in the street. I got a little turned around before finding my bearings. I was headed up a hill toward my new place and didn’t realize my lane was ending. I didn’t see the car in my blind spot and totally cut them off and our cars very lightly bumped. Immediately stopped next to the car I hit at a red light.

The driver was the pedestrian I ran over 20 minutes ago 5 miles away. Again he was disturbingly polite, apologized to me, and did not want to exchange insurance info (there was no damage).”

“I knew twins in college and they would cover each others work shifts and take tests for each other all the time.”

“I saw a clown get hit by a truck one time. No joke, it was a clown in full costume, red nose, funny hair, big shoes.

He ran out into traffic in a particularly busy area and was dancing around like he was playing live-action Frogger. Well, he lost. A pickup truck hit him, he got launched, and the impact knocked his shoes off.

I was at a red light in the intersection when it happened. My brain couldn’t really process what happened, and all those years of depression and Adult Swim made my default reaction “laughter.”

It was actually on Youtube from someone’s dash cam for a little while but the video got taken down about 5 years ago.”

“My husband and I have an 11 year age gap, which now isn’t that big of a deal (35 & 46) but we’ve ran into each other before. The weirdest run in was when I was 8 and at a friend’s birthday party at Chuck E Cheese.

It was a particular store in a smaller town. We all had fun and took a picture with an employee in the rat costume. Guess who worked at that Chuck E Cheese and was the only employee who’d wear the suit? We also had the same locker in the same high school, just years apart.”

Do you have any good stories to tell us?

Lay them on us in the comments.