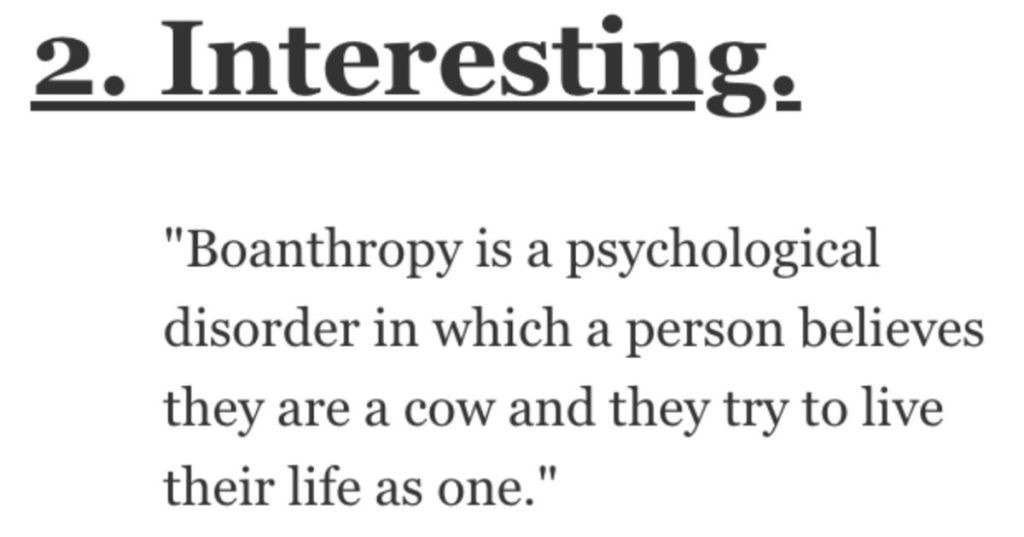 What Facts Do You Think Not Many People Know About? Here’s What Folks Said.

The world is full of wonder, people!

And it’s also full of fascinating facts that we should all know more of!

So check out these facts that AskReddit users were nice enough to share.

“The nuke stockpile in Washington State is guarded by trained dolphins that seek out and clamp a balloon on unfamiliar divers.”

“Boanthropy is a psychological disorder in which a person believes they are a cow and they try to live their life as one.

Medical explanations suggest late-stage syphilis as one of the causes?

“There was a man, Angus Barbieri who didn’t eat for 382 days.

He was morbidly obese and lived on tea, water, soda water and coffee while visiting the hospital weekly for vitamin and electrolyte treatments.

He lost close to 280 lbs and broke his fast with an egg once he met his goal weight.”

“Horses only ever grow one set of teeth which have an unusual length compared to the animal’s skull.

This is because their teeth wear down during the course of the horse’s life, until they’re completely used up and the horse eventually may not be able to chew anymore and d**s of starvation.

This is where the saying “don’t look a gift horse in the mouth” comes from, because you can tell how old it is by looking at its teeth.”

“The Dutch national color is Orange but the flag is red white and blue stripes only because the dye they used for orange faded fast at sea, while red did not.”

“Greater one-horned rhino or Great Indian rhinoceros population stands at around 3,700 individuals, a significant increase from around 200 remaining at the turn of the 20th century.

Strict protection and management action from Indian and Nepalese authorities and their partners are responsible for bringing the species back from the brink.”

“The Jews were expelled from Spain in the 1400s.

No Jewish children were born again in Spain until 1966.”

To date, only 14 people worldwide have been known to recover after developing symptoms.”

“Fossils that are very closely related to Red Pandas have been found in Tennessee dating back to about 5 million years ago.

“If you lay down and chew anything small (like gum) the gum can not only cause you to choke, but if you dislodge it from your throat hard enough it can end up in your nasal cavity.

In the same way milk can come out your nose, other small objects can get in there.”

“The tongue on a woodpecker wraps around its brain as a form of soft insulation when it hammers.

Then the tongue is able to extend far into the tree to retrieve bugs when it isn’t hammering.”

“The longest org**m in mammals is that of the domestic pig Sus scrofa domesticus.

Do you have some pretty interesting facts you can share with us?

Lay them on us in the comments.