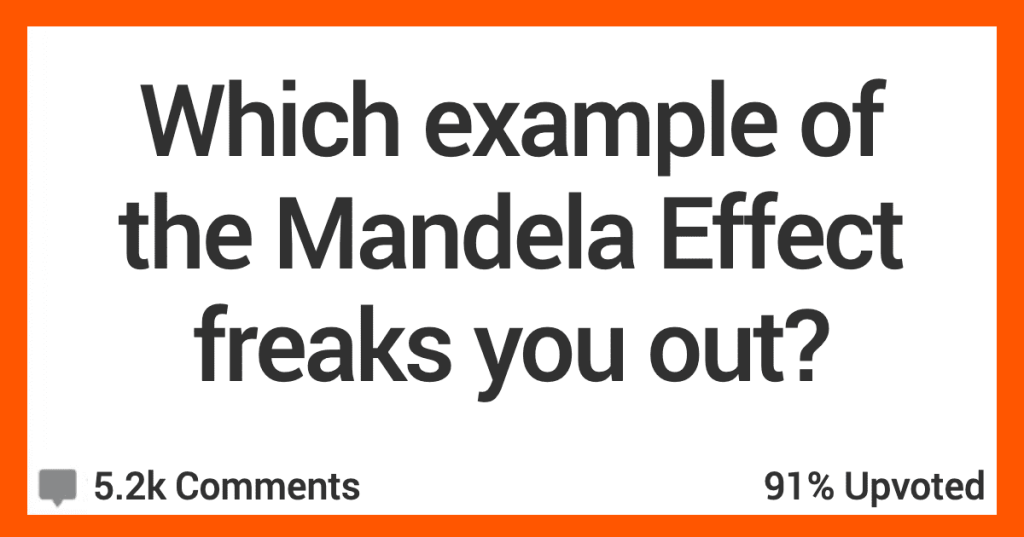 When I was a kid, I could have sworn that both George Burns AND Bob Hope passed away several times before they did…

I could’ve SWORN IT!

But, I was wrong…and that’s an example of the Mandela Effect.

Read on to see other examples that really freak out AskReddit users.

“That the Fruit of the Loom logo never had a cornucopia.

What’s crazy about that one is that someone emailed the creator of the logo about it and he said even he remembers it having one.”

“I Mandela effected my whole family once.

Years ago there was a football player on a rival team that always did a dumb celebration after he got a sack and my family and I always h**ed it.

One night after he did it my family started trashing the celebration and I said as a joke “we are all going to feel terrible when we find out he is doing that celebration as a request from a make-a-wish kid.”

Fast forward to years later and our team is playing that team again. The player got a sack and did the celebration. I rolled my eyes and said “I h**e that celebration so much” my mom instantly turned and said “don’t say that he is doing it for a sick kid. I actually like it” so I was like “what? No there is no sick kid” my whole family then proceeded to argue with me.

They all vividly remembered reading articles about it, seeing special report segments before games about it, and other information. Some of them even thought they knew the disease the kid had and even extra details about why the kid chose that specific celebration. They all had these shared memories that they were sure were true.

I was floored by all this and insisted none of that was true. So we looked it up. Not true. No kid like that ever existed. They still have trouble wrapping their heads around this one.

“The Monopoly Guy having a monocle.

I tracked this one back to “Ace Ventura: When Nature Calls” because he calls a guy with a monocle the Monopoly Guy.”

“I have a personal one that to this day a decade later still f**king destroys my mind.

I drove this car for years and years , like 80,000 miles. All through college.

I took work breaks in my car, commuted hours every day total, to college and then the opposite direction to work and back.

I even lived out of this thing on several occasions.

The day I go and trade it in, I’m pulling misc things out of the car at the dealer….

And the seats are GREEN. Not even a little. Like very unmistakably GREEN.

In my black Neon, with black interior, that ALWAYS HAD BLACK SEATS.

EXCEPT THEY F**KING WEREN’T DON’T LIE TO ME.

This is still upsetting to this day….. life is a lie and nothing is real.”

“I have a friend who moved away when we were young.

15 years later he came back to the same small town and people were shocked to see him. Like truly shocked. They had collectively remembered that he had d**wned in the river.

People remember reading newspaper articles about it, seeing it in the news etc. Spooky stuff.”

“When I got a job in a different city, very first day on the job, very first day in new city, I had no idea what to do for lunch except that I knew I wanted to go out and see what new city had to offer.

Driving along I saw a Big Boy statue: a cartoony boy holding a big burger over his head. Simpson’s Halloween special did a parody on it, except he was holding a doughnut.

ANYWAY! I see this Big Boy statue and knew this was the place I was looking for, this is where I was eating. A tiny burger shack that looked like it literally hadn’t had any work done since the ’70s called Sonny’s. And it was amazing.

I ate at this place a few times in my first few months living here. I always knew exactly where it was because you could see this 10m tall statue from various directions. Eventually the office moved to a different part of town and I stopped going.

I found out a few months ago that it was being sold. “What’s going to happen to the burger boy statue?” I asked someone. “What statue?” they replied. Turns out there’s no statue there. A few people say they remember it; maybe it was across the street, or in front of a different store, they muse, trying to remember specific details. Most people say they’ve lived in the area for quite a while and are certain there never was a statue.

I’ve used Google Street View, looking at historic images from years ago, and as far as I can tell it never existed. So why is my memory of this giant boy holding a burger over his head leading me towards deliciousness so strong?”

“”Take my strong hand” from the Scary Movie franchise.

I KNOW he said it, me and my friends would quote it at each other during school.

Multiple other friends have the same memories but went to different schools so I know it’s not just my friendship group that go it wrong.”

“Back in the 70’s, there was an episode of Sesame Street featuring the Wicked Witch of the West from The Wizard of Oz. It aired once and so many parents wrote in that they were so disturbed by it that the studio decided to put that episode in the vault and never air it again.

Fast forward to 2019. The episode became, finally, available to watch at restricted locations, including the Library of Congress. It still was not released to the Internet, despite an online clamoring for that to happen.

So here’s the thing.

My husband and I were watching a YouTube video on lost episodes of popular TV shows and the narrator started talking about the infamous Sesame Street episode 0847, and I immediately recognized it.

“Oh, the one where she loses her broom and Oscar has a crush on her,” I said. “She threatened Big Bird with a feather duster or something. Yeah, I remember watching this as a kid.”

But as the narrator went on, it became very clear that no, there’s no way I could have watched this episode as a kid. The episode aired one time only in 1976 and never again, and I was born in 1993. It’s impossible.

“Maybe you read about it,” my husband said. But there’s no way that’s the case either, because no details about the episode were revealed to the public until around 2017. People knew the episode existed, but there were no synopses or details available.

I distinctly remember watching this episode as a kid. I remember that I watched The Wizard of Oz shortly before I saw this episode; I even remember thinking that the Wicked Witch wasn’t as scary in the Sesame Street episode as she was in the original movie and feeling a bit relieved.

And I remember that I watched it on a TV, not online, because when I watched it, video player websites like YouTube and Google Video didn’t exist yet. I was probably eight or nine.

Eventually, we came to the conclusion that I must have watched a rare taped VHS of the episode, but the thing is, my folks didn’t have any taped VHS tapes of any kind at all, and even if we did, both of my parents would have been about twelve when the episode aired and there were no small children in either household at the time; there was no reason either of them or their families would have taped it.

So I know I watched this episode as a child because I have such vivid memories of it, especially concerning the Witch’s hat when she’s pretending to be nice because it reminded me of Mary Poppins’ hat. How else could I have known what the episode was about? But it’s literally impossible that I could have seen it.”

“Tinker Bell’s dotting the I in the Disney logo.

A lot of people say they recall her shaking her wand to try and get it working again.”

“I remember when I was 14/15 or so there was a massive piano store at the mall I went to with my friends.

At one point we visited the piano store and played around on them, and the sales rep noticed that my friend actually played the piano well and let him play on some $250,000 grand piano.

We went back two weeks later and it was gone. No storefront, no map waypoint, nothing. F**ks with me to this day.”

I swear she had a small ear mic, there was even a f**king doll that had one at one point.

“I’m a nurse, for years we saw a patient every couple weeks like clockwork due to her chronic illness. Her name was a fairly generic one, I’ll call her Jane Smith.

All of a sudden, Jane didn’t come to the hospital for months. Then someone found a news article in which Jane Smith had been k**led by her husband, who had then k**led himself. It was the town that I our Jane lived in, so obviously it was her, right?

A couple months later, Jane Smith is admitted to the hospital again and we’re all shocked and tell her we thought she was d**d. She said “yeah, I’ve been getting that a lot. It was a different Jane Smith in my town.”

What example of the Mandela Effect freaks you out?