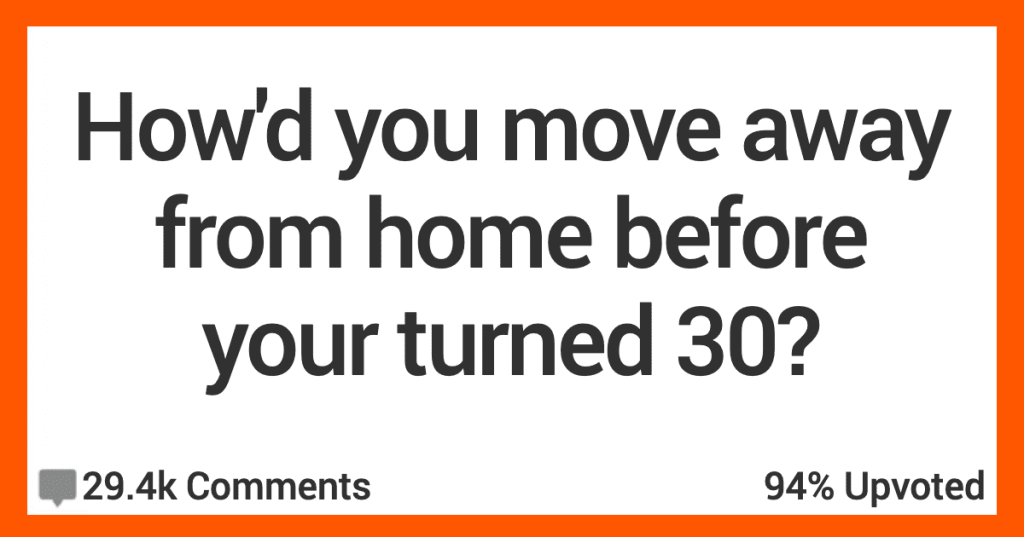 How old were you when you moved out of your parents’ house?

Yeah, things are tough out there…

Let’s hear from folks on AskReddit about how they managed to move out before they turned 30.

“Started working while I was in school.

Got out as soon as I could.”

“Moved out for college in 2006. Came back for the summer in 2007, but thereafter I got an internship so I just stayed in the city. Got a job at the same place after I graduated.

It was never some big moment for me (my parents are fine, just annoying), just a natural progression for me.”

Finished high school sleeping on friends couches while serving tables. Had a ton of roommates for the next 10 years.

At any given time I was living with like 3 or 4 people, it was never boring.”

“My parents didn’t kick me out, but there was definitely an expectation for me to be moved out and financially independent at 18.

My mother walked into a job as a radio DJ at the age of 18 and then became a journalist with only a high school education a few years later (early 1970s), so she had this expectation that I could do the same.

The thought of me being able to do anything like that in the 2000s was laughable.”

“I was kicked out at 16, called the police, and they said it is illegal but the only action they would take is to call DYFS, and that organization would handle it.

I was scared to go to foster care so I asked the police not to call DYFS. The police could not force my parents to let me back in the house. This was in the USA 12 years ago.”

I’ve never lived by myself, it was roommates until I got a serious girlfriend and now fiance.

There’s exactly 0% chance of me being in the same position I’m in financially if I had been paying full rent all those years.”

“I moved out at 19. My mum and step-dad moved to the other end of the town because rent was a lot cheaper.

But I didn’t want to live their so I looked for a small cheap flat l, found one, had a job, some savings. somehow it worked out. eventually found some used furniture and a new bed.

“I recommend moving to a college town. Lots of available flats, and roommates, and probably some cheap bars within walking distance.

Also possibly a tenants union and resources in general. Your town may have a “Food Not Bombs” organization so you can get a few meals. I also HIGHLY recommend getting a job in a restaurant.

Easy money, training in house, and you’ll take care of at least one meal each day you work, maybe even a free shift drink too.”

Came back for summer after freshman year and never stayed longer than a week since.

Nothing wrong with my parents or their house I just enjoy the life I created outside of it more.”

“I had a myriad of mental health problems. Depression and severe ADHD look a whole lot like laziness from the outside.

In his defense my dad thought he was doing the right thing, hoping to push me to take responsibility for my existence. They never really knew how to handle my issues.”

Have you moved out of your parents’ house?

Tell us your story in the comments!