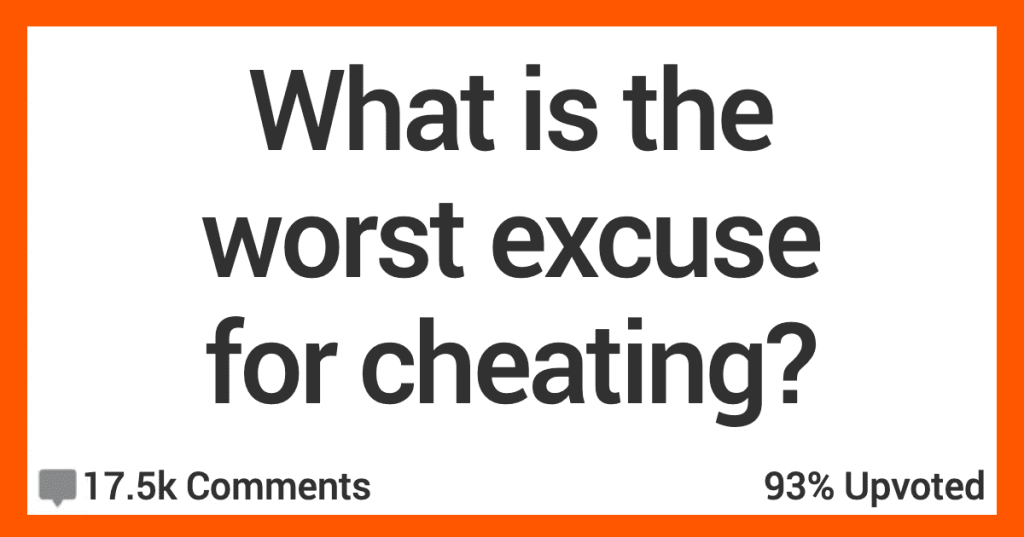 And a lot of them are pretty weak, to be honest.

Let’s hear from folks on AskReddit about what they think are the worst excuses people use as excuses for cheating.

““You aren’t exactly my type”.

-Actual quote after 3 years of living together.”

“I’ll never forget my first semester in college I met a girl in psychology 101 that shared with the whole class that her boyfriend cheated on her.

She said she was going to forgive him because his reason for cheating was because he had never slept with a black girl before and wanted to know what it was like.”

“Came home early from work to my last ex in bed with another guy….

“ I wasn’t trying to hurt you I didn’t think you would find out”….. I came home early because I spilled a fryer on my leg and she ignored my call for a ride because she was busy being f**ked…. I’m still mad when I think about it.”

“This one happened to a good friend of mine, I was with him just after this little gem was dropped on him, took him some time to recover.

It was tough to hear. I didn’t think I looked that bad.

But it messed with my self-image pretty badly.”

“”It meant nothing, and nothing compared to s** with you.”

““I was looking for an excuse to break up”

If you want to break up, why don’t you just… break up?”

“”I thought it was funny you didn’t know.”

Yup, that actually happened to me.”

“One that I heard from a former marriage counselor was a woman who claimed her husband was so affectionate, hard-working, and considerate, she developed an inferiority complex and dealt with it by cheating.”

“Awoman was saying how her partner doted on her, did all the dishes, did everything for her.

It was disgusting to her how much he loved her, so she felt the need to cheat on him.”

What do you think is the worst excuse for cheating?