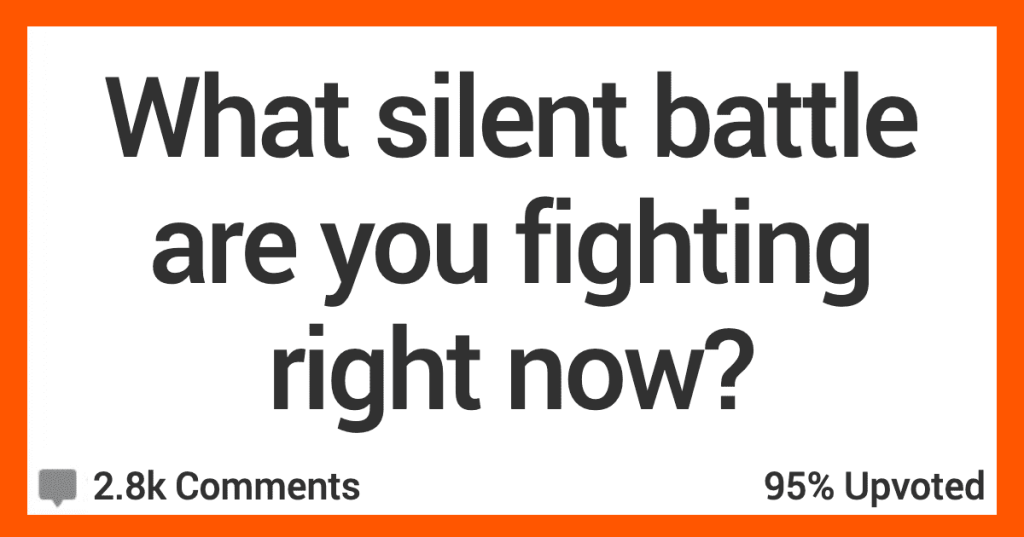 It’s always important to remember that every single person you know and even the strangers you run into on the street are going through something in their lives that brings them heartache and pain.

So be nice to everyone and treat them with respect.

Okay, now that we have that out of the way, let’s hear from folks on AskReddit about the silent battles they’re fighting right now.

“All the traumas i’m having to heal from so i can properly function in life.

I’m tired of feeling so held back because of the shit i had to go through growing up.

I’m very thankful I’ve got therapist that i have, but it’s just very exhausting working through your past so you can move forward.”

“A war of epic proportions over the ideal temperature for the office.

Any time my colleague leaves the room I adjust the AC to a non-cataclysmic heat death of the universe level, and when I leave the room she turns it back.

A word has never been said.”

I usually get bursts of energy for a couple months, and other times I can’t stand the thought of going.”

“I am bipolar 1 and have chronic PTSD.

I have been slipping into psychosis here and there lately and doing everything I can to not let that get a hold on me.

I don’t want to go back to the hospital.”

“Weight and establishing a healthy lifestyle. I’m not obese but i can see myself trending up.

It’s been hard to eat well and exercise regularly when we have visitors every two weeks and are traveling every three weeks for social obligations or work.

I want to look in the mirror and feel good about myself and knowing I’m making good choices. That’s not the current feeling.”

“As a professional artist, I’m genuinely scared at what AI art is doing.

Already people are spamming twitter with it and most people can’t tell the difference. It literally takes anyone’s style and does anything they want with it.

Want a Studio Ghibli portrait of your mom? Easy. Want a furry version of Megaman in the style of a 1990’s Disney film? No problem. Want a random fan arist you like but can’t afford to draw your My Little Pony OC doing the nasty with a pony from the show? Just feed it in.

And it’s barely getting started. This tech is already fooling even fellow artists and it has barely been half a year since the newer models have released.”

“I am almost 35 years old and I finally talked to my doctor about my anxiety and depression issues for the first time this morning.

It took 20 years, but I’m excited about maybe not feeling this way anymore.”

Shes already s**cidal. Cant wait to help her get through this. I used to run 5ks now i can barely walk without pain from an old injury.. can barely workout. Im a yoga instructor and cant instruct until my appointments come up and ik whats going on.

Saving money is impossible. I need a car and to move and I owe the irs like 2 grand by January. But I just got a bartending gig and still have to find another one.”

“The never ending loneliness I feel and the realization that I’ll probably never be with someone that feels the same way I feel to them.”

“Wanting to call her.

We were married a long time, and the divorce got a little bitter, but I miss her friendship.”

“I’m coming to the realization that I am an idiot.

All my life I have been taken care of. My Grandmother and then the mother of my children. I have zero mathematical abilities (numbers just don’t make sense to me.) I can’t remember the order of the months or tell time. I have never been able to play board games or understand the process of doing a sport.

Just situations that everyone seems to be able to do break down when I try to do them. If I ever messed up and said something completely wrong or incorrect I was always able to raise my eyebrow and convince the other person I was just joking. Now that my wife has moved on to her new family she still helps me daily(I guess I should say ex wife.).

Since I was very young I have been able to nod and parrot what a person in charge is telling me to make them believe that I understood the assignment. I found a job in a factory right out of high school that put me in a floor supervisor position and it allowed me to take what my boss said to me and I just relayed that to my crew. I did that job for 16 years and when we went to online work during Covid I was found out.

As soon as it came to light that I had no Idea how to do the things that I was asking other people to do I just quit my job. The last couple of years I’ve lost everything and am grasping at straws to try to live some kind of life.It’s been a little over 7 months now and I don’t leave the house anymore.

My Grandma has passed and my lovely ex-wife has helped me set up a small apartment that I can exist in. Its a silent battle to just keep going every day now that the person I was pretending to be my whole life has d**d in his own bed of ignorance.”