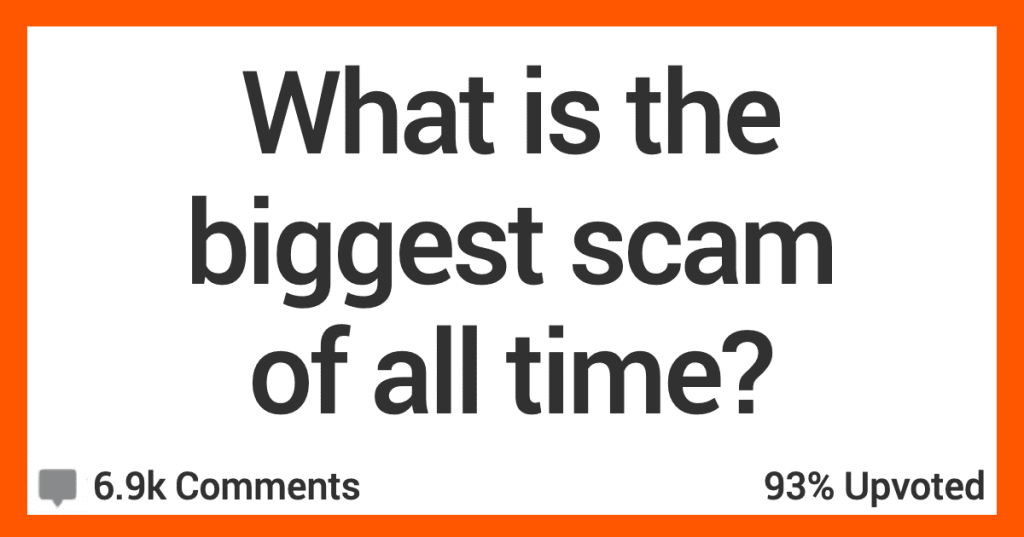 Have you ever had someone try to get you involved in a pyramid scheme?

There are a whole lot of them out there to choose from, that’s for sure!

And a lot of them are scams, as I’m sure you already know…

So, in the spirit of scamming, let’s hear from AskReddit users about what they think are the biggest scams of all time.

“The wedding industry is one big scam.

L. Ron Hubbard is quite a fascinating man to learn about, terrible, terrible man, he began lying at a young age and then never stopped afterwards.

Becoming a billionaire out of that creepy cult-like ‘religion’ Is the biggest scam of all time.”

If I have to pay to do my homework, that should be a class FEE.

A book is something I can borrow from the library.”

I watched a documentary on this practice.

My grandma had an index card next to her door that had a script for what to say when PCH came to the door, supposedly if you read the script you got an extra bonus prize or more money or something.

Her computer was just full of spam from all the companies they sold her data to, it was really sad and annoying the way they target older, more gullible people.”

“I am going to go with Charles Ponzi, the guy that invented Ponzi schemes.

This jerk promised people 50 – 100% percent returns on their investments when all he did was just shuffle around money.

He bankrupted many people and, worse of all, his legacy is other degenerates using his same schemes to sucker and bankrupt even more people.”

$20k/year for something I hope I don’t have to use.

They charge you for a drum and flat when technically it’s all one wing minus the tip.”

“Enron. That was a multi billion dollar Ponzi scheme.

Quite literally the biggest scam in history.”

“The U.S. making it illegal to not have insurance on your car and then having the insurance companies doing everything in their power to not pay out.”

“That investing 40 years of work is worth 15 years of freedom…in the best possible case.”

I like to dispel the myth regarding carrots and good vision or night vision because of a scam set forth by Britain at the time to screw with the enemy. They had just started performing night air raids and the Germans couldn’t figure out how they were accurately flying and bombing in the d**d of night so the Brits printed in their newspapers that they were feeding their pilots carrots to improve their night vision and how good carrots were for your vision due to the beta carotene.

Turns out that the Brits had just effectively mounted radar units to their planes for the first time and beat Germans to the punch with it. The truth is that beta carotene, while important for vision, is rarely in short supply in most diets and you can probably get enough out of a few packets of ketchup for weeks of good vision.

Meanwhile, here we are now approaching 100 years after the development of radar still eating the lies of carrots.”

What do you think are the biggest scams of all time?