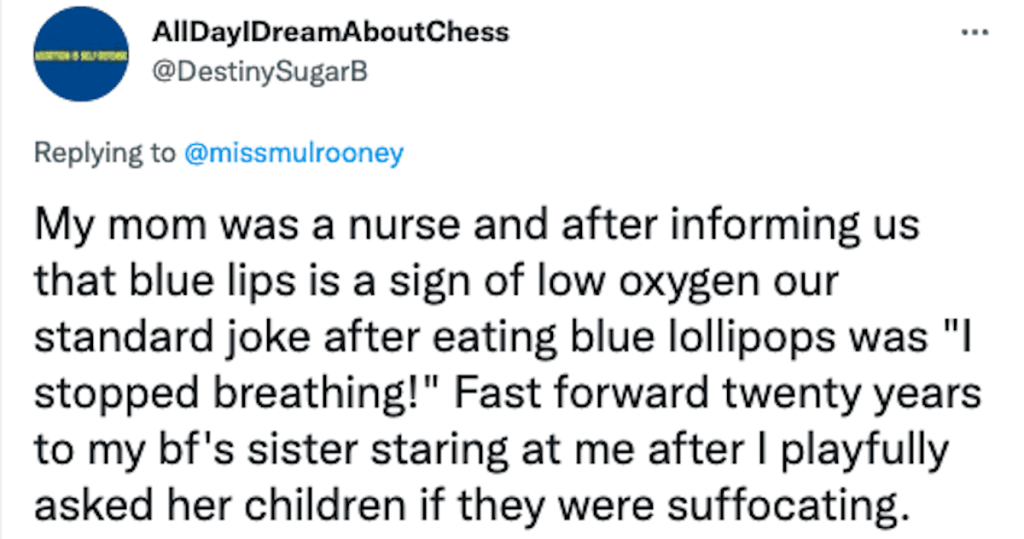 You never really know if things are weird or not when you’re growing up with them because you don’t know any better.

So how the heck would you know?!?!

And we’ve all had those moments that occurred when we got a little bit older and someone told us that the way we did things at home growing up was…strange.

And these 12 folks went on the record about what they found out later in life.

I guess no one else thought it was funny…

My mom was a nurse and after informing us that blue lips is a sign of low oxygen our standard joke after eating blue lollipops was “I stopped breathing!” Fast forward twenty years to my bf’s sister staring at me after I playfully asked her children if they were suffocating.

2. Are you gaslighting me?

This can’t be true!

Her mom is from MN so “duck-duck-goose” was called “duck-duck-gray duck.” I’m from Buffalo so there were butter lambs on Easter. Each believed the other was gaslighting when the concepts first came up.

So who else got ceremonially spanked on their birthday – one spank for each year and one to grow on? I thought everyone did until my husband was like “wait, wut?” And this was literally the ONLY time we were ever spanked.

Her: I thought you said we were having pancakes? Where’s the peanut butter??
Me: …uhhh

5. Enough with the butter!

He put butter on ALL bread, even sandwiches. ALL sandwiches. Weird. He stopped when I pointed it out.

I’ve a lot more pain and odd health stuff than I realized and grew up a bit neglected. He helped me normalize seeking medical care. Helpful!

I grew up putting apple sauce in my Kraft mac and cheese and I thought my boyfriend was going to call the authorities on me as well.

You’re the only ones.

My mom always referred to arming the car alarm as “chirping.” Like “don’t forget to chirp the car.” I’ve been informed this has never been said before by anyone else.

This reminds me of a friend who upon visiting his gf’s family discovered they had a sibling tradition to smash chocolate marshmallow cakes on each others’ foresheads before picking off the broken chocolate. He was utterly perplexed

The first time my wife made tacos for us, I’m like “did you forget the taco seasoning!?” And she stares at me blankly and says – “is that how you make them good like the restaurants!?” We both laughed. Her family NEVER used spices while cooking.

11. This is just revolting.

I think I’m gonna be sick.

‘what do you mean you never chewed up chips and fed the chewed up dorito mush to toddlers? my aunt and mom had done that for a decade’

We always had ketchup on the table for taco night. Ketchup and no salsa. Also one of my chores was to “make a gallon of milk” every night (from powder). 🤮