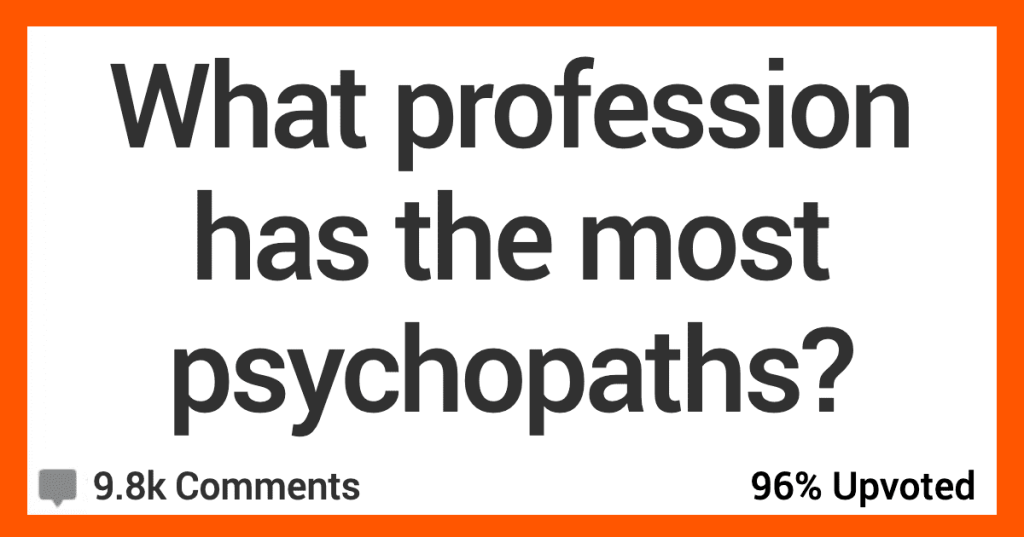 What Profession Do You Think Has the Most Psychopaths? People Shared Their Thoughts.

Sorry to all the lawyers out there…but I’m gonna go with lawyers on this one.

What profession do you think has the most psychopaths?

1. Gets hot in the kitchen.

“In my experience the kitchens seem to have a disproportionate amount of f**king lunatics.

The movie Boiling Point is an excellent portrayal of the culinary industry. I have seen every scene in that movie play out, sometimes more then once a night.”

Look at the behavior of influencers and you’ll see what I mean.”

“CEOs and other people in positions of power.

You don’t get to the top most of the time by being nice its crazy hours, money, crazy drive to get there and need to be in that position.”

Psychopathy is a statistical entity, not a diagnosis. Being a psychopath doesn’t necessarily make you a bad or evil person, either.

Many of them learn that antisocial behaviours harm them overall and rationally choose not to engage in them.”

Correlations were proven by studies in different countries – that job takes a toll on human mind, and increases h**icide rate.”

I don’t know if it’s necessarily sociopaths but there’s something off there. This is coming from someone who goes to therapy and is very much content and happy with my therapist and she has helped me through some seriously dark times.

Even she admits there are a lot of bizarre therapists out there… my mom is an amazing therapist but when her therapist mode is turned off it’s like a whole different person.”

Those kinds of people basically have to step over the (hopefully not literal) bodies and careers of their colleagues and employees to get where they are.

Nice people don’t have that ruthlessness.”

“In my experience, Cosmetology.

I’ve been friends with quite a few people who cut hair, and they’re all bat-s**t crazy.

No offense to anybody in the industry who isn’t mentally unstable. We probably won’t be friends.”

When I was a new graduate nurse on a BMT/hem onc floor I’ll never forget how they walked into my patients room (older woman with leukemia who watched her son d** from the same disease when he was a child- so very traumatized) woke her up to assess a wound they had done surgery on and left her on the commode while she was flashing (going into pulmonary edema) they told me she was sitting up and informed me how the wound was healing… I walked in and had to call a medical response.

On nightshift they constantly sneak into your patients room without telling you then come out and inform you “your patient needs pain medication” yeah? because they took out a drain/ripped off a dressing etc etc when I could’ve pre-medicated them if they just spoke with me before!

My partner is doing her residency (not for surgery) and said she left crying everyday after her surgical rotation in med school.

I’ve met too many that got a badge so they could get away with murder but couldn’t get in the military (or were too scared to).”