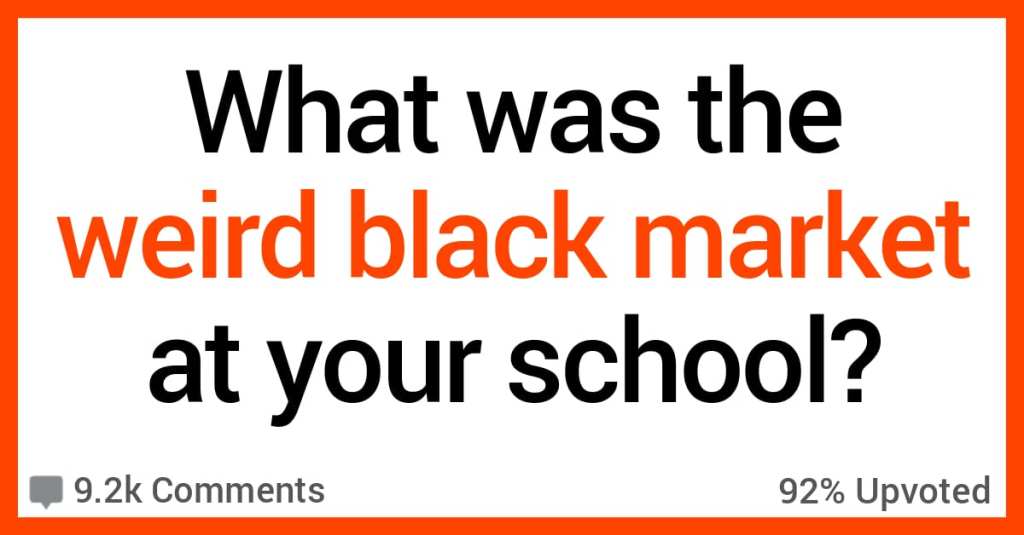 12 People Talk About the Weirdest Black Markets at Their Schools

Do you remember in your high school how there was one kid whose locker was full of contraband?

He (or she) had stuff to smoke, stuff to drink, and weird stuff to look at. And it was all for sale!

You know you did! Because every school has a kid like that!

Folks on AskReddit talked about the weirdest black markets they had at their schools. Let’s take a look.

“I was friends with a kid in middle school that had a descrambler. Dude would buy up blank VHS tapes and record like 10 minutes of p**n off the Spice channel and sell for like 10 bucks a tape. Gave 2 dollars for tape returns for new content.

He was a Greek kid, and with a bunch of other Greek kids in the school, formed a Greek mafia with him as the Godfather. Being a big kid that played football, I was one of the Greek mafia’s ‘associates’, but alas, I could never become a ‘Made Man’.

He made so much money off selling VHS p**n tapes, when we hit 16, he was able to buy himself a pretty sweet Camaro. Once the internet came about in 1998 is when his business ran dry. By that time he was into other s**t.”

“A girl set up a little business out of a box of stationary, writing forged letters from parents. She had all different paper, pens and pencils of every kind, and could write in convincingly accurate tone for the content of the notes depending on which kid they were for.

She used different styles of handwriting and different styles of punctuation and language too. She’d even fudge the spelling if she thought the kid’s parents weren’t great at it. She grew up to be incredibly educated. I look back and see that as her first moment of evil genius. It definitely suggested she would go on to brilliance one day and she did.”

“I organized the black market. My school banned Pokemon Cards, so I made a new game with paper cards.

I was drawing pretty well, so I folded an paper in 9, it made pieces approximately the size of a Pokémon Vard, and created a whole new game out of this. Sold boosters for 10 cents. Spend all my afternoons drawing cards for the school. Teachers eventually heard of it and couldn’t ban it because it was still officially still me distributing drawings. And then I started to do replicas of Pokémon Cards.

Like people had to show me the proof after school that they owned the card, I made a replica, and then the whole Pokemon Card trading continued with paper replicas. Then after school people made the real exchanges based on what replicas they exchanged during school.”

“There was a pretty big market in my elementary school for Atomic Fireball Candies.

I remember being out for a couple days, but coming back with a big handful of the fireballs in my backpack… only to find the teachers had implemented a zero tolerance fireball policy.”

“Remember Columbia House? Where you could get 10 VHS movies for like $0.99? But then you had to buy like 5 more at regular price?

So I did the math and figured out what the actual price per videotape was after all commitments to the “club” were made, and it was like $5.

So I took orders from classmates, bought movies for them, and then sold it them at a slight markup. Basically, I was undercutting Suncoast.”

“Probably the jocks who smuggled in food for the diabetic and hypoglycemic kids.

School has seriously strict policies and wouldn’t budge for medical problems. These kids were in some serious danger and administration would confiscate their food all the time.

Most of the kids playing on the sports teams were placed on pedestals and protected by the administrators. They could do just about anything they wanted and they’d get away with it because they were athletes.

So a lot of them would smuggle in extra food in their backpacks and pass it out to the kids who needed it.”

This one kid would buy every single bag out of the vending machines and sell them for like double the cost.”

When we learnt about caveman we decided that it would have been a great idea to create our own prehistoric clan, so we smashed rocks and used them to sharpen tree branches.

Some of us where particularly keen on sharpening that started to use walls as grindstones, they were able to sharpen about 6 sticks in half an hour and started exchanging them for berries during recess.”

“We used to mix koolaid packets with sugar in a ziploc and then you dip your finger in and eat it or just pour it in your mouth.

We called it Crave. It eventually got banned so kids would eat it in secret and sell it to other kids.

So basically we were just eating tons of sugar all day.”

“I sold “protection” when kids wanted to ditch.

When the school announced openings in the attendance office, I had a half dozen of my friends rush over and sign up immediately. By the end of the day, we owned it.

I charged $10 – $20 to ignore each truancy. Each morning, if we had clients, I’d hand a list and half of the cash to whomever was working that day. Word got around fast, but we were never caught.”

“The dude who sold our fake IDs was really committed to his work. He made state and college licenses.

Carried around two metal rings with samples of all the stuff he could make using Britney Spears shot from the Hit Me Baby One More Time album as the photo. He would also give you the ID in a white envelope. I had a rush order once and he had a standard rate for that – ended up picking it up from him at home in the other side of the city.

Dude was on point. I think he ended up being an interior decorator.”

“Let me tell you the story of The Great Bead Wars.

7th Grade. A kid in my class went on vacation to New Orleans, and came back with a cr**py little plastic bead necklace for every kid in the class. It was cute. Until some kid was fiddling with his necklace, and broke it, spilling beads all over the floor, interrupting the lesson. Most of the beads got picked up and thrown out.

It wasn’t long after the lesson started up again, that some kid had taken an errant bead and chucked it across the room while the teacher’s back was turned, pelting his friend in the side of the head. The bead bounced off out of reach. But he needed to retaliate. Luckily, he had his own necklace, with several dozen beads of his own. He quietly broke the necklace, grabbed a fistful of beads, and hurled them back at his attacker, catching many a civilian in the crossfire.

Needless to say, the war escalated.

And war is cruel.

Every time the teacher’s back was turned, volleys of beads flew across the classroom. No one was safe. If you were too focused on the lesson and forgot to raise your binder as a shield while the teacher was writing on the chalkboard, it wouldn’t be long before you felt the sting of a bead striking your temple.

Alliances were made. Factions developed. The bead economy was formed. At lunch, valuable food items were bartered for bead supply. A full necklace? Intact? That would set you back at least a twinkie and can of soda.

Betrayal and espionage were rampant. Best friends became sworn enemies. Technology thrived: bead catapults were made from rulers. Slingshots were made from elastic bands, pencils, and binder clips. One student managed to engineer a stapler into a spring-charged, loadable bead shotgun.

A direct hit to exposed skin from 3 desks away from that bad boy would leave a mark. You didn’t cry out though – You clenched your teeth and fought back the tears; There are rules to war. We knew that it was a matter of time before the teacher caught on, and if she found out then it was all over.

Well, that day eventually came. We came in from recess, and written on the chalkboard was the following:

I’m not blind or deaf. I know about the bead wars. All beads and bead-launching devices have been confiscated from your desks. If I find any more beads being thrown, the whole class will be in detention for the rest of the month.

I’m a grown man now. I have a wife, and a job. I get out of bed every morning and go about my day, as if The Great Bead Wars never happened. People smile at me and shake my hand. They don’t know what I’ve been through. They couldn’t possibly imagine the burden I carry. The invisible scars that will never heal.The fact that most nights, when it’s silent, I still hear the “tic. tic. tic-tic-tic” of a bead bouncing on my 7th grade classroom tile.

But I persist. I have to. If not for me, then for those classmates so many years ago. Those whose names I’ve forgotten, but whose terrified faces are burned into my mind’s eye. I don’t know where they are now; if they’re alive or dead. I don’t know if I want to know. All I know is that I will share this unspoken bond with them for the rest of my days.”

In the comments, tell us about the weird black markets that you had in your school.