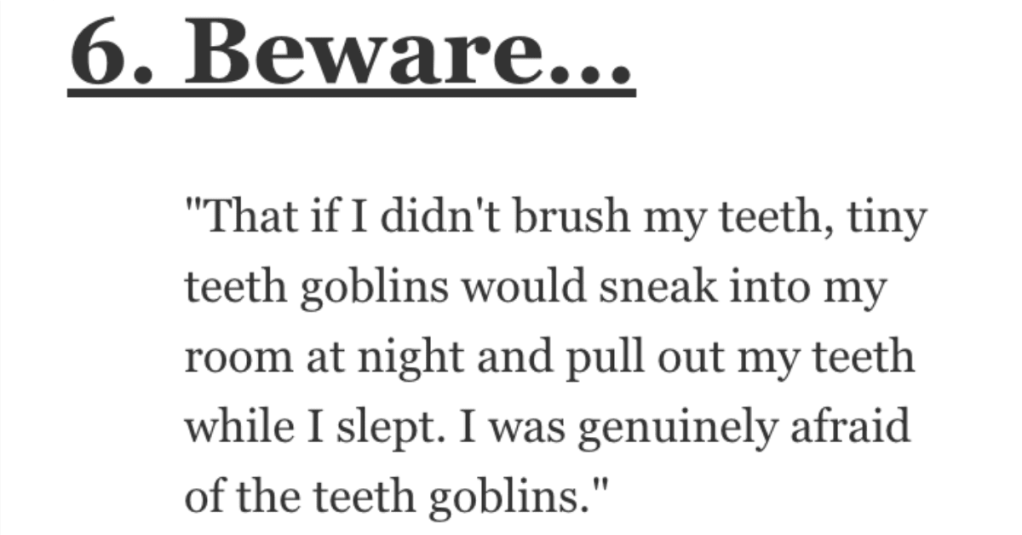 What’s the Most Ridiculous Lie Your Parents Told You? Here’s What People Had to Say.

Parents gotta do what they gotta do, right?

They’re in charge of making sure their kids survive and thrive, so sometimes they gotta lie to make things run a little bit smoother.

AskReddit users went on the record and talked about the most ridiculous lies their parents told them.

“My dad got fed up of watching Barney the dinosaur when I was a kid, and one day when I asked to watch it, he said:

I never did watch Barney again.”

“When I was little, my mom told me if I didn’t finish my dinner my stomach would get very hungry and come up and eat my brain.

A few nights later I woke her up at midnight crying because my stomach growled and I needed a second dinner or it would eat my brain.”

“That my siblings and I had a sister named Alice.

Apparently she wouldn’t stop talking in the car so they dropped her off on the side of the road…never spoke on road trips ever again.”

“When I was a kid my father told me about “the can”.

He said it contained a family secret of incredible value, and that when I turned 18 I could see it. On my 18th birthday I asked my father about the can, he said “what the f**k is the can?” and after I reminded him of it, he burst out laughing, saying that he was f**king with me.

For almost a decade I believed that I would be privy to some cosmic secret on my 18th birthday, turns out I’m just very impressionable.”

“My dad d**d in a car accident a few years ago. And till this day my mom says that he is still on vacation.

I don’t know if it is a coping method for her but i haven’t said anything about it.”

“That if I didn’t brush my teeth, tiny teeth goblins would sneak into my room at night and pull out my teeth while I slept.

I was genuinely afraid of the teeth goblins.”

“I lived with my grandma until I was 16.

My mom is currently telling me that never happened and she never left me with grandma. I guess I imagined my entire childhood

‘Lived with’ doesn’t do it justice. Grandma raised me. I alternated weekends between my mom and dad but I’m sure her 4 days a month are made up too.”

The gas station 7/11 gives away free slushies on 7/11. At 7, 8, & 9 years old my parents just told me that the 7/11 wanted to celebrate my birthday by giving me free slushies and I did not question it.

I thought the gas station just really liked me.”

“If I acted up my mom would say she was sending me to the hospital to be put down.

It really really f**ked me up.

She even drove a sobbing puking me to the hospital to be put down one day, she said she would give me a second chance and didn’t take me in.”

“When I was younger i learned that mushrooms were a fungus and refused to eat them.

My dad made me some soup with mushrooms in it and i threw a fit about eating it, so he inspected the bowl and told me they were whale toes.

“When my dad wanted me to stop bothering him he would send me on aimless errands.

“Go to the shed and get me the chain stretcher”.

I’d be looking for hours.”

“Parents always claimed we were a poor family growing up so didn’t have money for sport clubs/hobbies or expensive school trips.

Got older and realized it was due to the amount of money they would spend on weed.

They still don’t see it as an issue to this day.”

“They told me kids came from a government agency called the CAA (Child Assignment Agency) and that they could exchange me when ever they want if I ever misbehaved.

They told me they were eyeing a “well behaved little girl” but hadn’t decided yet.

They used it against me for years.”

Did your parents ever tell you any outrageous lies?