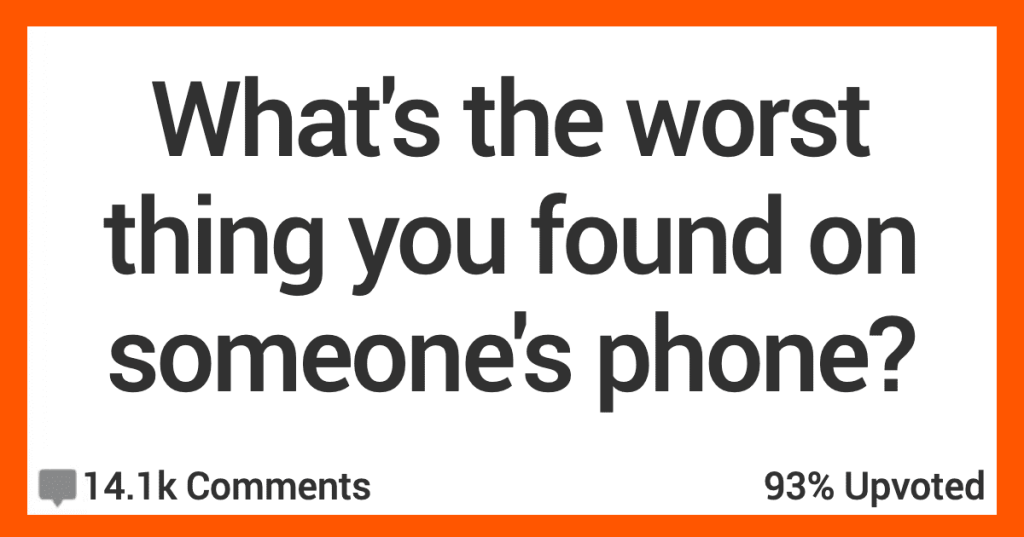 One lesson I’ve learned when someone shows me a photo on their phone is that you never, ever swipe from that specific photo that you were shown.

“I was helping a tech challenged friend move everything from an old phone to a new one.

His most recent photo was his hard d**k against the bong we all shared when we s**ked at his place. I no longer use his s**king devices.”

“A bartender friend of mine found a phone unlocked on the bar and couldn’t locate its owner so he punched in his own phone number and found out he was already in the contacts as ‘Creepy Jay’.”

“I was excited to tell the story about how my date handed me his phone to show me a picture, and it was followed by about ten d**k pics of different d**ks.

He was a rugby player and apparantly he left his phone on the bus, this is what his teammates did to his unattended phone.”

A long-term patient of mine wanted to show me pictures of he & his fiancés new puppy.

Instead, he showed me two d**k pics.”

“Videos of my then husband descending into madness.

He had gotten a traumatic brain injury after which he took loads of videos of him going crazy. Last one he was covered in vomit arguing with his reflection and had no idea it was him.

100% do not suggest watching someone you love like that. Trauma.”

“I found I love you texts on my moms phone to my boyfriends dad……..while my parents were still together.”

This was in the early 2000’s, when phones were still super primative. Her phone had that Snake game on it, and mine didn’t, so I would occasionally use her phone to play Snake. The game would get interrupted if someone texted though.

And sure enough, while I was playing, her secret lover texted her. I saw it, and then couldn’t help myself and had to read the rest of the texts between them. Absolutely crushed me.”

“A relative bought a second hand phone online and I was tasked with fixing it as it “still had photos on”.

They had videos and photos which included terrorist material. It was still linked to the old owner’s google drive.

We called the police and they said it was extremely serious, took the phone and never heard anything else.”

“Not nearly as drastic as some of these, but on my ex’s Kick, he was sending other (much prettier/skinnier) girls photos of me sleeping naked.

The worst photos I’ve ever seen of myself. And with all of them, they were making fun of me/calling me fat/ugly/gross. Really f**ked me up for a while.”

“I used to work IT for a mid sized corporation.

A rough way to find out I was the lowest paid person in the company.

But good motivation to move on.”

“On my ex’s phone, he had a bunch of photos of this disabled girl we both knew, but they were all taken outside from far away.

Super creepy to begin with. Turns out he had a fetish for disabilities and took photos of her without her consent and was j**king off to them.

Oh and he went to school specifically to work with folks with disabilities and is surrounded by them every day at his job now.”

“A new coworker had come in off shift mistakenly.

When he pulled out his notes app to show us his schedule, there was a link below it to a wikiHow on “how to get a girlfriend”. He must’ve been mortified, since he got all nervous and put the phone away really quickly after noticing.

He was a nice enough guy. It’s tough out there folks.”

Tell us your horror stories like this in the comments.