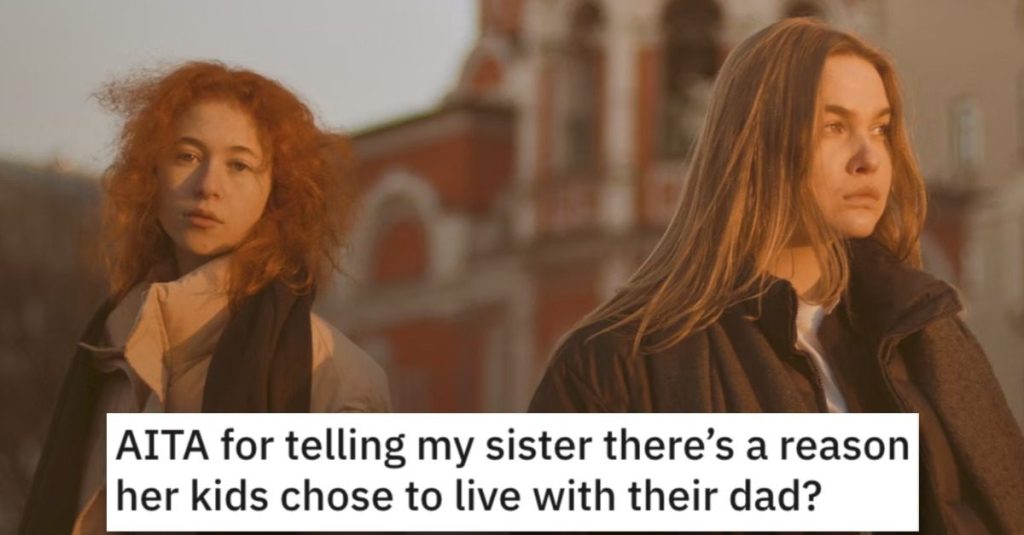 She Told Her Sister There’s a Reason Her Kids Don’t Live With Her. Did She Go Too Far?

Once in a while, you just have to tell the truth no matter how much it might hurt someone…

And this interaction sounds like it led to some seriously hurt feelings.

Check out this story from Reddit’s “Am I the A**hole?” page and see if you think this woman got a little too brutally honest with her sister.

AITA for telling my sister there’s a reason her kids chose to live with their dad?

“I (32F) have a 14 year old daughter Jess. Her father and my husband d**d in an accident when she was young, so it’s been just us two for a long time.

As a result we are very close and she’s a lot more open to me then most kids are with their parents. Around a week ago she asked me if I could take her to the movies on a date with a guy in her class. I know the guy distantly because they’ve done some extra curriculars together and I was thrilled he was my daughters first ‘boyfriend’.

I took them a few days ago and they ended up hanging out at our house for a bit afterwards. He was extremely polite and maybe it’s just the mum inside me but I couldn’t be happier for her.

I went to my older sisters house for coffee earlier this morning. Backstory, my sister has two teenagers (16 and 17), who live almost full time with their dad. They had a very messy divorce around three years ago, and both kids choose to live with their dad.

The reason for this was because my sister was extremely over bearing on them. She was the kind of mum who believed kids should have no privacy and she should run their lives until they were adults. I know she had many arguments with them because she would take away their doors, not let them hang out with friends, search through their phones every night etc.

This was the primary reason for her divorce, although she won’t admit that. While I love her, as someone who grew up with little privacy I fully understand why her kids don’t want to live with her.

My daughter came up in conversation and so bought up her first date. When I explained how it went, my sister laughed and told me that I must be joking. When she realised I was serious, she told me I was a terrible mother for letting my daughter walk all over me and not setting boundaries.

She ranted on for a while but she basically said that 14 year olds are incapable of going out themselves and that I was being lazy and neglectful by allowing her to do that. She also said ‘I would never allow my kids to do that,’ so I replied by saying ‘That’s exactly why your kids drive with their dad.’

She got very quiet and then told me to leave. When I got home I started thinking more about what I said and while at the time I thought I was simply telling her what she needed to hear, now I’m wondering if I crossed the line.”

One individual said she’s NTA and that her sister really knows that this is the truth. 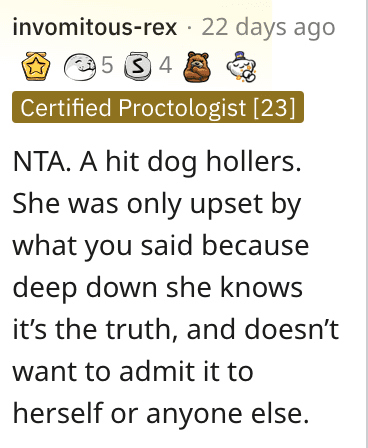 Another Reddit user agreed and said her sister in the one who crossed the line. 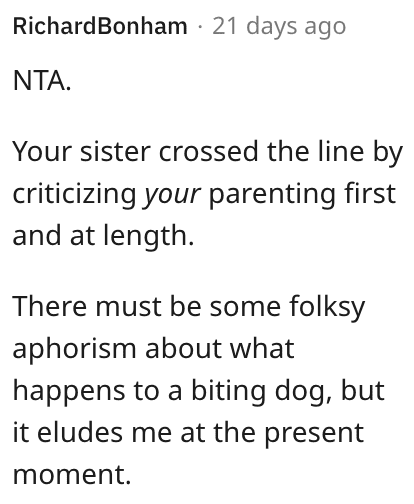 And this reader also said she’s NTA and argued that it sounds like she and her sister were raised in an overbearing home.