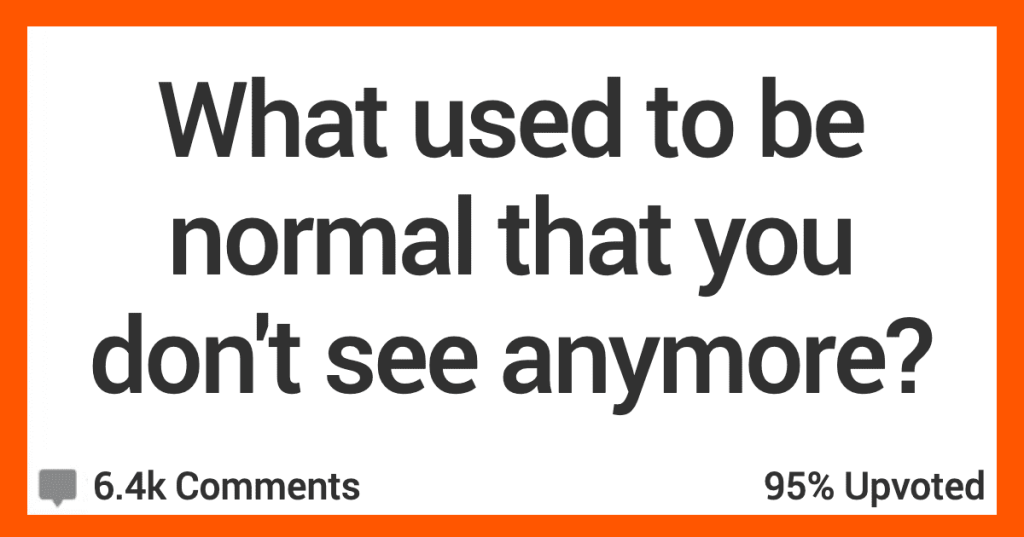 One thing I remember about being a kid that you definitely don’t see anymore was people s**king c**arettes inside shopping malls and using all the ashtrays in the middle walkways between stores.

I’m guessing that all went away sometime in the mid-1990s.

What was normal when you were a kid that you don’t see anymore?

“Cassette tape innards strung out along the highway, glimmering in the sunlight.

It was EVERYWHERE along the freeways.”

There used to be a *ton* of them in my neighborhood as a kid and every evening you could look at the sunset as twilight set in and see flocks of bats flying around.

Apparently, around the time I was in middle school, a fungal disease ravaged the local bat population and they never recovered. You never see them anymore.

Funnily enough though, at the time, a local high school girl had this huge campaign to set up bat feeders to help bolster the local bat population and help them survive the fungal disease by giving them easy access to food.

Said local girl has since become a federal Park Ranger as an adult and currently works for a state fish and wildlife service.”

“Moms yelling from the front door to their kids to come home for dinner.

Or just being home by dark.

Literally gone from dawn until dusk, maybe popping in for a quick lunch, if you didn’t grab it at someone else’s house.”

“Computer paper filled with lightly printed numbers and it had tear off sides.

My dad used to bring lots of it home for us kids to draw on.”

“Everybody s**ked everywhere. At restaurants, the office, airports, everywhere.

There’s a picture of my grandma holding me as a baby in one hand and a ci**rette in the other. Nobody thought that was the least bit strange.”

“Fireflies… I swear I saw them every year, in our backyard or when we went camping etc.

Now I never see them no matter where I am… except for a few nights in the summer of ’21 after I moved to a new house. It was so nice to see them again.”

“The pet fish section at every single Walmart or Meijer.

My parents wouldn’t let me get one though.”

When I was a kid, every pile of dirt had a bike jump built into it.

I haven’t seen one in years.”

“Get off the freeway at the exit by home depot, then drive until you see the Burger King, then go into the neighborhood that’s right behind it, So once you come into the neighborhood, make a left, then you make a right, then after you pass the pool make another right, when you’re in front of the park make a left, then make a right at the next stop, my house is the one with the blue mailbox”.”

“Popping in a game and have it just start right away. Im old (39) and I picked up a ps5 about a month ago.

Had to set up an account go through internet settings, pop in the game I bought to find out it needed an update which took about an hour… Im glad we have the tech we do.

But video game consoles of the past few gen make me miss 1990s and early 2000 consoles.”

“Little kool-aid barrels with metal tops and you can punch through with a fingernail.

Not much of a drink in them but they were delish.”

“Kids playing, riding bikes, all over the neighborhood and not a single adult worried about them.

We would stay out until dark. Mom and Dad never thought anything of it.”