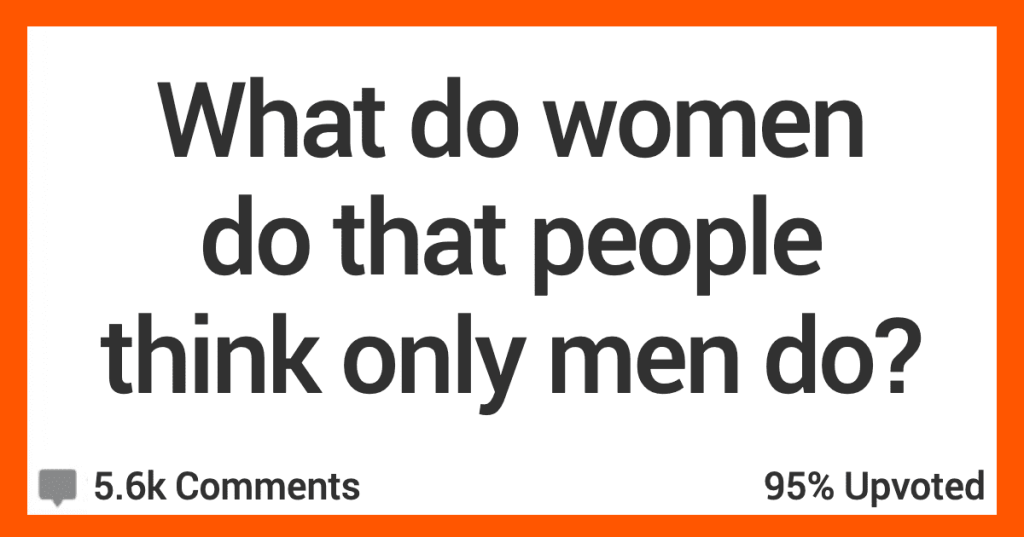 12 People Talk About What Folks Think Only Men Do…but Women Do, as Well

The battle of the s**es rages on, my friends!

And today we’re going to explore an important topic…

What do a lot of people think only men do but that women do, too?

Check out how AskReddit users responded to this question.

You’d think it’d be common knowledge by now but it’s still hell wading through the “fake gamer for likes and attention” and “wow you’re not like other girls, you’re special” bulls**t.”

I have a friend (he’s in his 70s now) whose first wife was a**sive – threw things at him, attacked with mop handles, etc.

He called the police on her one time and they laughed at him. It was in the early 80s, hopefully, those kind of calls are taken more seriously now.”

“Being handy and build stuff, I’m great at it.

My husband, not so much.

Our kids come to me if they want something fixed.”

Out of all the people who I know have cheated only one is a man. The rest are women, and the man is the only one who owns up and said he f**ked up and shouldn’t have done it.

The women I know who cheated all make excuses about petty s**t like “he worked too much” or “he didn’t appreciate me enough”.

Man or woman take some f**king responsibility for your actions.”

“Using their position as an authority figure at work to s**ually harrass their subordinates both male and female.”

“I’m from the Middle East.

For some reason most people here think that women never swear or say/do/think of anything s**ual, and they get so surprised when a woman does any of these things.”

“Women are often s**tty communicators, but because are generalized as being more talkative, etc., people assume it is the man who has the communication problem.”

“Eat a whole bag of crisps in one sitting.

Drink straight out of the container and put it right back in the fridge.”

“Date someone purely for casual s**.

Not judging at all, it’s just that it’s a stereotype that it’s mostly guys who do this.”

I see so many comments online complaining about women not understanding that sometimes men aren’t thinking about anything when they ask.

Anyone can zone out.”

I’m a welder and most of the women I’ve meet in this line of work weld better than the guys.”

“Get too competitive and act like a-holes regardless of if they lose or win.

Usually put down to ‘Macho behaviour’ no, just d**chebag behaviour.”