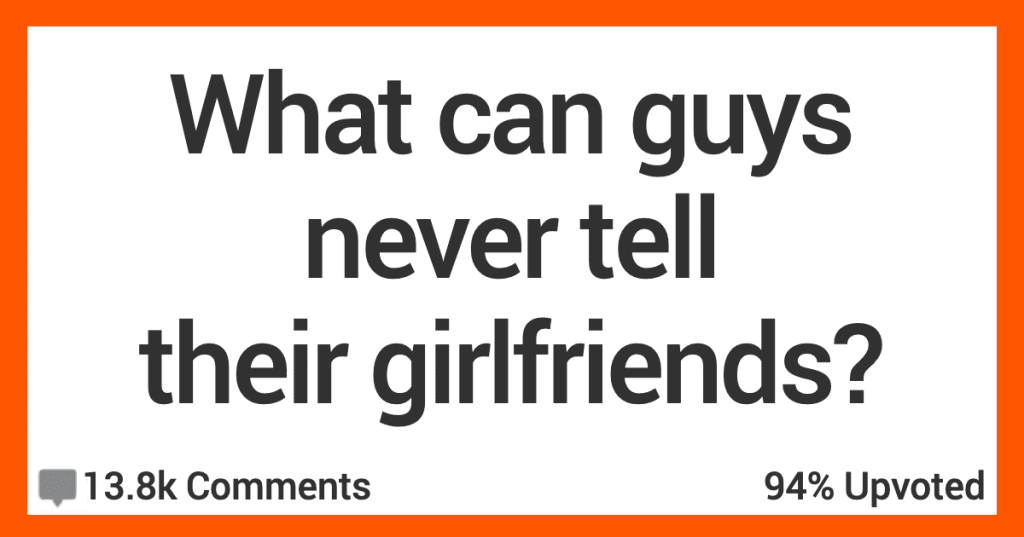 12 People Talk About What Guys Can Never Tell Their Girlfriends

But today we’re going to focus on the fellas!

AskReddit users talked about what they think guys can never tell their girlfriends.

I was watching an episode of Batman the Animated Series. You woke up half way through the episode and picked up the remote and changed the channel.

You knew I was watching and I never got to see the end of the episode. I’m still salty about it.”

“That when I think in bed it isn’t about her when I’m silent.

I’m trying to solve a riddle from a game or question something on a TV show.”

“How much I actually spend on my hobbies.

“I need space from her sometimes and it’s not because she did something wrong.

We all need it sometimes.”

“In my case “Whatcha thinking about?”

My wife asks me all the time and I’ve been daydreaming about what it would be like if I owned that McDonalds across the street and then after falling in a vat of radioactive fry grease was able to turn into Ronald at night.

I would fight crime but only if it was food related and all of my weapons would be burger condiment themed. Then I’m thinking about aerodynamics of pickles as shurikens and what process I would use to make them sturdy and sharp enough to be lethal.

It’s a lot easier to just say “spacing out” then see her cute face raise an eyebrow in concern if I’m working too much again.”

Like, I don’t think my girlfriend knows the fullest extent to how much I love the concept of Power Rangers and other super sentai mythos.”

So when the nightmares come on too strong, I just say I’m dreaming that the dog got out again.”

“That I enjoy not talking to her when we’re cuddling.

Don’t get me wrong I also love having a good conversation with her, but I’m perfectly content just being silent and that always seems confusing to women.”

And it’s not because of anything in particular you’re doing. I just think you’re hot. And I intend to ignore it.

Because I don’t wanna just bring it up. And I don’t really feel like dealing with it anyway. It’s just kinda…. There.”

“Yes, that girl that we passed on the beach in that bathing suit was attractive.

And the fact that I think she was attractive doesn’t mean I’m unhappy with our relationship or that I want to cheat on you.”

“That I’m thinking about Nothing. Nothing. Zip. Nada.

Not a single thought. I just look at the clock and wonder why minutes (or in some cases hours) have passed when not a single constructive thought has entered my mind.

It doesn’t help that I have resting someone-kicked-your-puppy face.

My current gf gets it now, but man, it took years to convince her that I’m not overthinking, I’m dissociating.”

“The extent to which I spend money on movies, games, books, comics, etc.

But honestly, we have a mutually-assured-destruction-type deal going where she also doesn’t have to tell me how much all the plants and vintage clothes cost.”