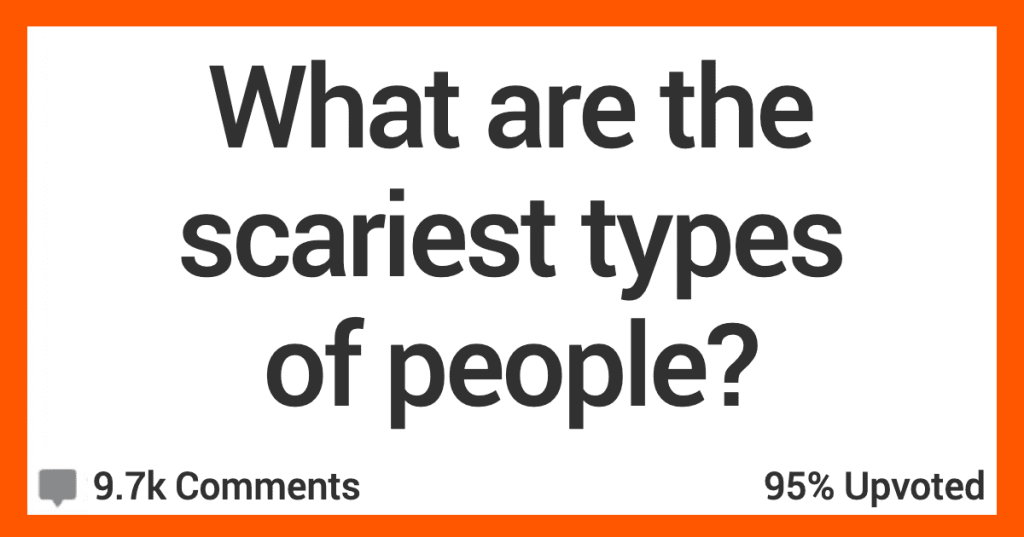 12 People Talk About What Kind of People Are the Scariest

And today we’re going to hear from AskReddit users about what kinds of people they think are the scariest.

“‘Friends’ at work who are the first to go and tell everyone your personal business along with running their mouth to the bosses about everything behind your back.

Act like best friends in person but really try and use the friendship to gain an upper hand at work.”

Not someone who made a mistake in remembering something but someone who literally reconstructs reality and tells you that’s the way it’s always been. Tells you you said things you didn’t say, changes around what they said, so many changes that it ends up being a complete fabrication that they believe it the truth.

Then they tell you you’re gaslighting them because you don’t agree with the fabrication. You have to go no contact or you will go fully insane being led on this merry dance and trying to get them back to reality.”

“I have a cousin who’s a v**lent sociopath (been locked away almost all his life now–which is sad but necessary).

He would smile and compliment then steal and burn things.”

“People with nothing to lose.

It sounds like a movie cliche but these people are legit dangerous if you make them mad.

They just don’t care what happens to them, that’s what makes them so dangerous.”

“People who feel justified in using v**lence every time they get the least bit annoyed.”

“Those obsessed with another person to an extreme point, be it a celebrity or an ordinary person.”

“In my experience someone who calls you their best friend after just meeting them.

Happened to me twice. They are usually manipulative and a**sive.”

Living in Chicago I’ve learned that scary guy on the train will likely leave you alone but the group of 14 year olds walking toward you on the side walk might jump and rob you.”

“People who feel no empathy or guilt are the scariest.

Who knows what they’ll do next…”

I have a hunch that I know one, and I call their behavior “turning on the charm” to get things to go their way.

I can tell when they are going to ask me for something because I see their behavior switch.”

“Back in my clubbing days, I overheard more than once some guy say the line “Tonight I am either picking up and getting laid or getting in a fight.”

It was always a good idea to leave a good 30 mins before close to avoid getting caught in a cross fire of punches.

Every Thurs, Fri and Sat there was always a fight.”

“The scariest kind of person would be someone who manipulates, and lies like it were normal because they’ll easily get you to do things and make you think it was your idea.”