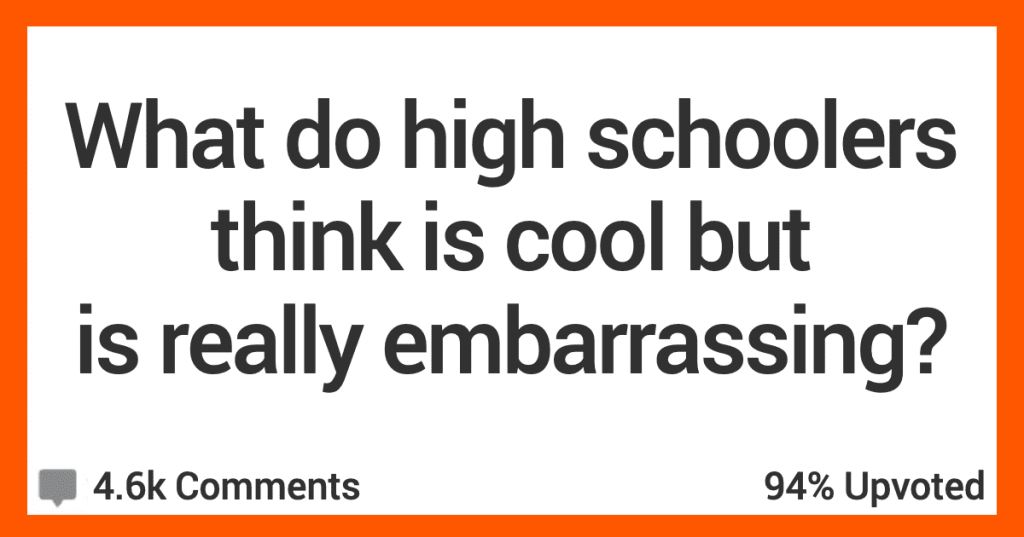 And cringe, we will!

Let’s take a trip down Memory Lane and hear from AskReddit users about things that high schoolers think are cool that are actually cringeworthy.

“Growing up I’d always see these few seniors who graduated roaming around the school grounds and catching up with teachers/juniors. I always thought it was cool.

Then I actually grew up and went to my old high school twice (once because a buddy of mine was doing an event and needed help, the other when a teacher I was close with retired) and it all just felt very…weird?

I’ll probably never go back there but to see many seniors coming back multiple times just seems a bit sad now.”

“When I was in high school there were some girls in one of my freshman/sophomore classes bragging about how mature they were because they had boyfriends who were older and would invite them to college parties.

Like…no, your boyfriends are losers and you’re just naïve.”

Anyone can string together a bunch of big words, doesn’t make you intelligent.”

“We used to have a guy who would show off scratch marks on his back left by the girls he was having s** with.”

“Being rude to teachers.

Every person who I know who was rebellious in school cringes hard when they think about the s**t they said to teachers.”

Being genuine even to the point of seeming uncool is an amazing personality trait in adulthood that some don’t get back until they are parents.”

“Pretty much the whole persona they play to fit in.

You’ll eventually grow out of it. The question is just when…”

“Worrying what other people think. The concept of “cool” in the first place.

My brother and I (in our early 30s) were watching a group of teenagers trying so hard to put on this cool, unemotional facade at Disneyland while everyone else around them just enjoyed themselves and we were laughing to ourselves that teenagers are so afraid of displaying emotion or passion and nobody else cares.

But we all went through it, and we all reach the realization that it’s more fun to just enjoy ourselves.”

“My kid is in high school. I am often the weekend chauffeur for his friend group- being in the car with them makes me want to poke sticks into my ear.

If I hear “bro” one more time we’re going into a ditch fellas. All that’s to say is that there is no way that I would hang out with high school aged kids- or anyone under 30 if I’m being frank, because the level of maturity is just at a different place.”

I went to high school in a number of places especially New Mexico, and several kids thought it was cool to fight (and often have s**) in hard to reach places like flood channels and if someone needed help, it would be easy to slip and get hurt and even get impaled by something like glass or syringes as they were often treated like waste bins.”

“Discussing s** loudly with the purpose of having random strangers hear it as if that somehow is a sign of maturity.”

“I remember this guy in high school who had a fearsome reputation.

Him and his cousins would show up at parties, literally say, “Do you know who I am?” and attack people. People were terrified, and rightfully so, people were getting severely hurt.

Once he graduated high school, he would come swing by the high school often, s**ke out front with his “friends” and talk about how it was so great to graduate, he didn’t have to get up early or do anything, etc.

At first everybody was like, “Cool, lucky!” and then it was like, “Heh…let’s go back to class…”