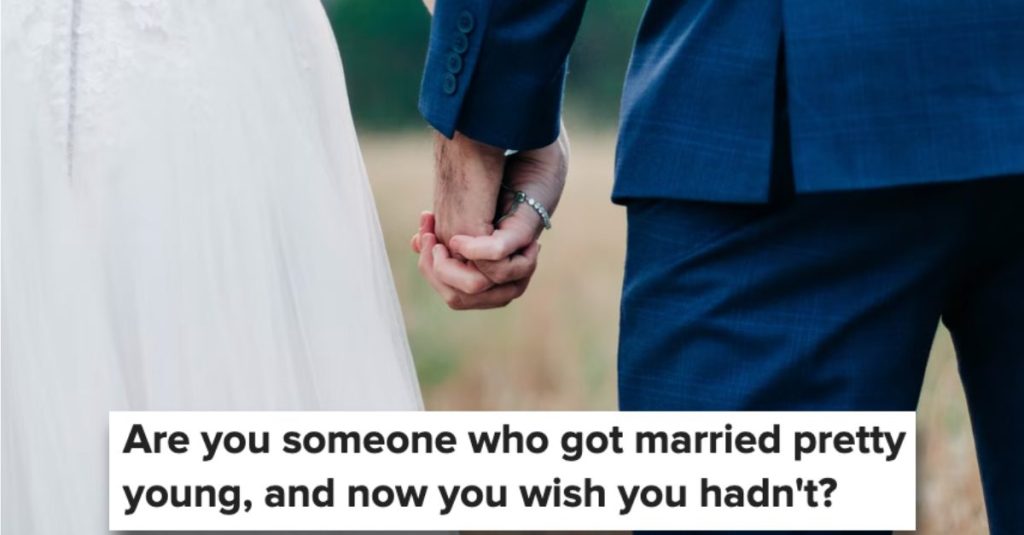 12 People Talk About Why They Regret Getting Married Young

Of course, most of us believe in the old adage “different strokes for different folks”, but there’s no doubt that people are waiting longer to get married these days.

But still, some folks still tie the knot at relatively young ages, and some work out and some don’t…

Take a look at why these 12 people regret getting married young.

“I got married at 25 and divorced at 26. We were together for two and a half years before we got married, and looking back now (I’m 31), I should’ve seen the red flags.

He was controlling in the ‘I love you, so you should do this’ type of way. He drank a lot and blamed me for his drinking. I always felt like the babysitter, having to make sure he wasn’t saying anything embarrassing or insulting to my family and friends. It was a lot on me and still slightly affects my anxiety.

Therapy has helped in the past few years, and I’m now in the best relationship ever.”

“I think that young couples either grow together or grow on their own and grow apart. I was in the latter group.

Neither of us course-corrected or spoke up when things got not so great, and didn’t until things were no longer fixable. We were together for six years before getting married, and divorced after four years.

We were 27 when we split. I definitely made mistakes I wish I could undo. We didn’t do any of the hard work that a successful relationship requires. We just coasted until we couldn’t live with the coasting anymore.”

“I got married after two and a half years together at the age of 23. I had struggled with my self-esteem and confidence, and while I had had relationships with guys, I never had much luck with anything serious and long-term.

So when I met my husband, I think we both settled on someone that was just ‘good enough.’ We barely had anything in common, and we fought horribly and frequently. After seven years together, I told him I wanted a separation.

It was very amicable and quick, as we did not share children or real estate. We are both in different (and better!) relationships now and don’t speak, but I wish him well!”

“I got married at 20 and divorced at 23. One of the hardest parts was that you constantly are told how difficult marriage is and how the first year is the hardest.

I was too young to know how difficult it was ‘supposed’ to be, and I spent the first year wondering, Is it supposed to be THIS hard? I kept second-guessing myself because of that advice. I spent many nights crying myself to sleep and wishing I hadn’t gotten married so I could just walk out.

My anxiety was through the roof for the entirety of our relationship, to the point where it was debilitating. Still, I stuck with it in hopes that it would get better, until I realized it wouldn’t. I wouldn’t say I REGRET the experience, necessarily. I don’t see it as a failed marriage or as a mistake; I see it as a growth experience that taught me a ton.

My advice to others would be, trust yourself. If you are wondering if it’s supposed to be this hard, it’s probably not. And be patient with yourself in the process of getting out.”

5. Against my better judgment…

“I got married at 23…against my better judgment.

I read an article one time that said the part of our brain that’s in charge of decision-making doesn’t fully develop until age 25. I told my boyfriend this when we were talking about our future together, and I also told him that I wouldn’t want to get married until after 25 for that reason — I only want to get married once.

But after we’d been dating for four years, he proposed to me when I was 22. I wanted to say no, but I didn’t want to reject him because I did want to marry him eventually, and I didn’t think we’d recover from a failed proposal. So I said yes. My dad told me it was a good idea so I could get on my future husband’s health insurance.

My mom just went along with it because she thought I was happy. I wasn’t, but I didn’t have the tools I have now to advocate for myself. The marriage lasted for four years, and it ended badly. Moral of the story: Wait, wait, wait; trust your intuition; and have a strong support system around you that will tell you the truth.”

“I got married at 25 to a man I met when I was 21. He was in the military and got orders to go to another state, and my mom then gave me the literal worst advice: ‘Don’t move without a ring.’

So I didn’t. I told him I wouldn’t move unless we were engaged, so he proposed, we moved, and I felt trapped by all the promises we had made about the wedding by the time I realized I was outgrowing him. I figured he’d grow up and be the person I knew he could be, so I went through with the wedding.

Two years later, we were separated. Long story short: Move without the ring. Never let external expectations push you into ‘the next step’ until you’re really ready within yourself.”

“I got married at 16 because I got pregnant. I rebelled against my mom and got married to my boyfriend, and we moved into our own place.

We lasted five years and two kids before addiction turned him into someone I didn’t know anymore. Most of the marriage only happened because I didn’t want to give my kids a broken home like the one I grew up in. He cheated on me, stole from me, and pawned off our stuff, all to pay for his pill addiction.

I worked the whole time even while pregnant, and he never kept a job. I filed for divorce once he spent the rent money on pills. While I was young and dumb, it did teach me that I deserved a better life…and I did finally find my soulmate 10 years later.

Thankful for the hell I went through because it taught me what I actually want and need in a husband.”

“Married at 24. I was too young, she was too young. We had a storybook friendship that turned into a romance, but we were both too naive to see the red flags that should have been so clear.

We fought all the time, if not once a day, then at least several times a week. We had extremely different goals in life, and we agreed early on to a compromise that neither of us was particularly happy with. She thought I was too tight with money, and I thought she was completely unrealistic about what we could afford.

She wanted a quiet family life, and I wanted us to stay involved with our friends. No single issue was a dealbreaker, but all the little pieces added up to something unsustainable.”

“I got married at 22 to my high school sweetheart. He wasn’t the hardest-working person, but he was kind.

We enjoyed doing things together and had a lot of fun. We become parents five years into the marriage, which was something I didn’t want. He refused to grow up and work hard to provide for the family, and put that on me.

It didn’t take very long before he started cheating on me with a very young girl. That was it for me. I filed for divorce and got full custody of my kid. It was freeing. After getting over the emotions and stress, I realized it was the greatest thing I could have done for me and my kid. No one wants another child to care for — they want a partner.

I love my life and wouldn’t change anything, but I definitely don’t advise getting married young. People change, and so do you.”

“Married at 23; he was 30. We’d been together five years. What I see now is that I still had growing to do as a person, while he was already comfortable in himself.

I guess I thought his wants and ambitions would grow with mine, and when they didn’t, my world felt very small. We separated and I moved out six months before I turned 30, and we divorced earlier this year. I can’t say I regret it, though.

While it may feel like a bad choice, if I hadn’t done it, I wouldn’t be the person I am today because of it (and the therapy!). We’re still on good terms, and I’ve moved on in my life for the better. I’ve never been happier with who I am as a person.”

“I married my college sweetheart right after graduation. He was in ROTC and moved around a lot after we graduated because of the Army, so it just seemed to make sense to get married.

We were way too young and soooo not right for each other, but I stuck by him during three deployments and three different moves across the country. Then he told me, after his third deployment, that he wasn’t happy. I moved home, devastated.

Turns out he was having an affair with my (married) best friend. Still, I don’t blame him entirely — he did me a favor. We were so, so young and had no idea what we wanted. We’re both happily remarried!”

“I got married at 18 during senior year of high school because she was pregnant.

We stayed married for two years, and I filed for divorce on our two-year anniversary. It seemed like a fitting gift, since she had walked out three months before.

The marriage failed because only one of us was ready to settle down and be a parent. I ended up with full custody of my son, and she has almost no contact.”