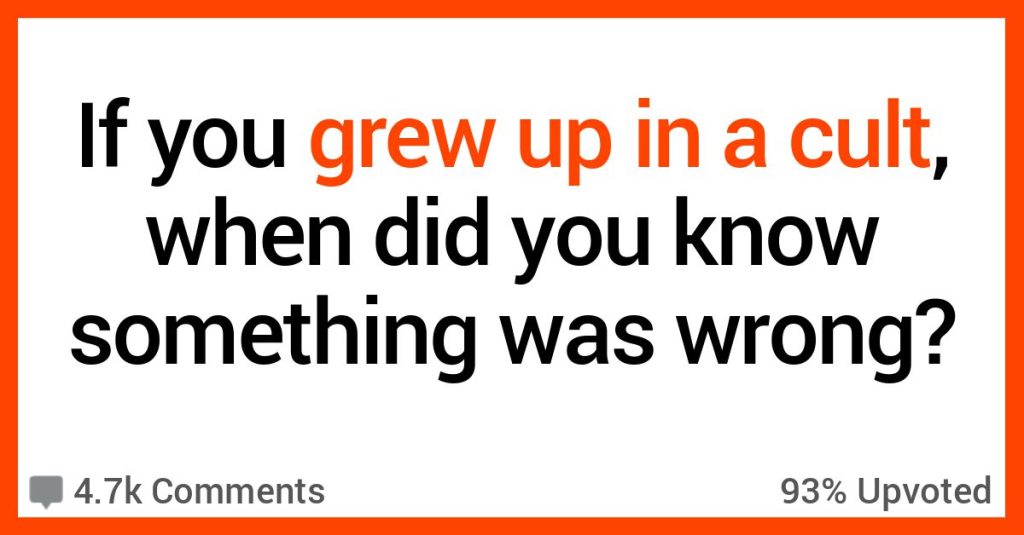 I’ve met a few people in the past who didn’t necessarily grow up in cults, but were definitely on the fringe with extremely religious organizations that had a little too much control over their lives.

And even their stories were pretty creepy to me.

But today we’re gonna go a step further and hear from folks who experienced the real deal.

AskReddit users who were raised in cults talked about when they first realized something was wrong.

“I was born and raised into a not-so-known buddhist cult called “SGI”. My mum was practicing it when she was still preggos with me. Thus I was considered to be a “fortune baby” as they say. I didnt think too much about it as a kid.

We went to our meetings every week and met people but at some point I learned the religion had a whole political thing going on in Japan and I was so confused. Also, I’ve had extensive mental health issues and over the last couple of years I realised my mum who has been practicing this religion for 20+ years is still a narcissist who has never shown an inch of wisdom or any kind of forgiveness as our religious text said.

Ive slowly moved myself away but its hard because anywhere I move to my mum will always try to “get me connected” to a local member and its a lot.”

“I was raised in a very strict manner by Church of Christ parents in an extremely legalistic Southern Baptist church.

I was extremely sheltered, allowed only one movie (maybe) and one hour of TV a week, ONLY Christian movies, books, TV shows, radio, etc. I never interacted with kids outside of the church bubble, as my parents started a Christian school so that I “wouldn’t have to go to the evil public school and be brainwashed.”

For me it was when my pastor and my youth pastor took me aside during a church camp and said they were worried about my salvation as I hadn’t led anyone in the sinners prayer and didn’t go on “visitation,” which was door knocking on Sunday afternoons to talk about Jesus.

Instead, I played harp as part of the instrumental group every Sunday and Wednesday and sang in the choir when I wasn’t playing, which practiced during the same time as visitation.

They basically told me that since I showed most of the other fruits of the spirit like love, joy, peace, patience, kindness, etc., they thought I was Christian but since I openly boycotted visitation and hadn’t borne any of the “bringing new sheep into the flock” fruit by leading anyone in the sinners prayer, I couldn’t possibly be a full Christian and they wanted me to work on that.

I was 15! I never interacted with non-christians and was part of the instrumental group and choir which practiced during visitation! How could I do that if everyone I knew was already Christian??

It led to some serious questions, but I couldn’t really do anything until I escaped to college 3 years later.”

“When it came time for me to leave for my own mental health.

I became the villain and when confiding in my college tutor she was horrified to learn even a fraction of what I had grown up with.

She was the main encouragement I needed to GTFO when I did.”

My first hint that something was wrong was the amount of control exerted in our day to day lives. No beards, no long hair for men, no tattoos or piercings, no shirts with “edgy” artwork like band shirts or shirts with skulls, no entertainment they don’t approve of, etc.

What really tipped it over the edge for me though was their doctrine that all non-witnesses deserve to d** at Armageddon by gods hand, simply for not being witnesses. Armageddon is supposed to be urgently imminent, and over 99.9% of the world will d** just because they’re not witnesses.

That didn’t sit right with me. I had been working in retail for some time, and the people I worked with were every bit as intelligent, compassionate and loving as any witness I knew.

I finally pushed against that fear and did the research. Woke up instantly. Realized why they taught us to fear “apostate” information so much, it’s because they know it’s all true and they don’t want us to see it.”

“When I realized that the doors to the 13 story former hotel building we were all living in was locked and you had to sign out to leave.

No one (from children to adults) could leave without an explanation to where they were going and when they’d be back.

Group operated under two names. IBLP (Institute for Basic Life Principals) this was their “outreach” label where they would go to churches and show this seminar to bring new gullible people into the fold.

ATI (Advanced Training Institute) was for the people that actually wanted in deep and consisted of an entire homeschool curriculum to make sure your kids got brainwashed correctly.”

“When my other friends came to my church for the first time. Most of my friendships were isolated to church members until middle school.

I started going with my other christian friends to their churches which were all similar to each other. When they came to mine they were uncomfortable and they all started telling me my church was weird.

Around 13 years old a friend’s mother asked me a few questions about my church and I had recently gotten the internet so I started asking questions at my church, and the questions were not welcome.

My church was an offshoot, home based, from what is known as “The Way” ministries.

Recently a coworker told me a long story about almost getting indoctrinated to a cult while he was in college. I mentioned how it sounded like “The Way” and his eyes lit up.”

7. Message from the Elders.

“When the ‘Elders’ told me that I could no longer speak to my younger sister anymore because she was in ‘bad standing’ with the organization.

She’s the only family I have left. They made her out to be this monster just because she wasn’t actively going to church. That’s when the glass shattered for me.

“After watching The Day After in the 1980s, I asked my mom if we knew the nukes were coming, who would she rather spend her last moments with me or the cult leader, she choose him.

I came up with my own survival plan after that. I was going to skateboard to safety.”

The first time I realized something was wrong was when a huge core belief changed in 1995. ( The end will come before the generation that saw the events of 1914 d**d…changed to.. well it’s changed 7 times since then) I was confused and it didn’t compute that my entire life’s beliefs changed over night.

I struggled for a while until shortly after my then husband beat the s**t out of me and for some reason HE called the elders over to help and the elders told me ” Be a better wife so he doesn’t get angry” I was done then. DONE.”

“One of those evangelical megachurches. Started as a nice corner church; the piety was genuine.

I dont think that the pastor planned the whole thing – he seemed a genuine preacher until the church grew exponentially. Like went from a few hundred members to 15,000 in less than 2 years. Then his main focus was maintaining (entertaining) the masses, which drove him to do stupid things.

Many weird things started happening. Especially, one day he “had a revelation” that the congregation needs to expand further and members have to, I am serious, give out all the GOLD they were wearing. I know a lady that got into serious trouble with her husband because she gave away her gold wedding band.

My last straw was when he promoted himself to Apostle and renamed himself “Paul”. Apostle Paul. Okay.”

“When I met with my mother about difficulty coping with my arranged marriage.

I explained to her the a**sive aspects of the relationship and how much it was breaking me down, and her response was that it was my job to be quiet and if God wanted to change my husband, he would.

I suddenly realized, sitting across from her and looking her in the eyes, that she had let my father take my childhood innocence and had zero qualms about my mistreatment now at the hands of my husband.

I knew when I hugged her goodbye and cried all the way home that I would never see her again. It’s been four years since I ran away.”

“When in the prayer line I was afraid the preacher’s could read my mind. The church was very big in the Gifts of the Spirit.

Speaking in tongues and interpretation were everyday events. But what scared me was the thought of their interpretation saying I had an evil demon or accusing me of something (it happened to others). As a result, I put any bad thing that I thought I did in the back of my mind and partitioned it off in hopes to hide my thoughts.

It’s not until thirty years later when I’m starting therapy and talking about this that I’m really starting to grasp the true impact of it all.”

Were you raised in a cult?

When did you first realize that something was wrong?

Talk to us in the comments and share your stories. Thanks!