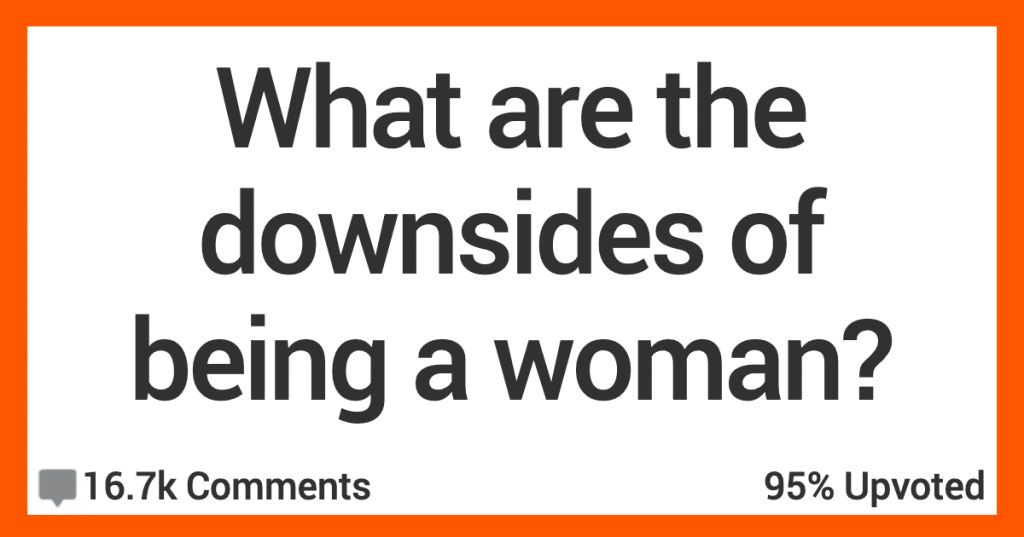 12 Women Get Real About the Downsides of Being Female

Life is tough all around, but I’d say that, as a man, I believe that women have it MUCH tougher than we do.

And today we’re gonna get real with ladies on AskReddit about what they think are the downsides of being female.

“A lot of women would find this as lucky but, I get my period for 1-2 days every month.

I showed my sister one of my bloody pads and she said “Maybe you’re having a miscarriage”.”

“I am sick of mechanics telling me my car has issues it doesn’t have. I have some basic knowledge on how my car runs (thanks dad), so I know you’re bullsh**ting.

Had one tell me my alignment was out a few weeks ago when I just wanted new tyres. I left it because I had a service booked in a few days and I didn’t notice anything wrong. My alignment was fine.

He also broke the sensor on my wheel and told me it just fell off when he removed the tire. They must think we are all stupid.”

“It depends on where you live, but…

Some women have essentially no rights.”

“Having a baby face.

I feel like I get talked down to a lot because I look much younger than I am.

“I am a woodworker. The amount of time I waste while men in hardware stores digest that is truly stunning.

They mostly seem pretty delighted about “a woman with tools” but skeptical to various degrees, too. And even having to listen to them tell me how great it is that I’m doing what I’m doing (MY @#$&!! JOB, PEOPLE!!) is exhausting.

“Having pain be dismissed by doctors, or having them assume you’re being dramatic.

Had a 10cm hemorrhaged cyst on my ovary and was forced to wait for 8 hours doubled over in pain. Once I was finally seen the radiologist was shocked I hadn’t been seen sooner.

Have also been told my cysts was just “mittleschmerz”- pretty much “ovulation pain” and was told to take Tylenol. Infuriating. Edit to add- the doctor who said it was just normal pain never bothered to actually do an ultrasound.”

“Being an avid gym goer, I’m tired of men thinking their workouts are more important. That they can take something I’m clearly using and telling me to wait.

Oh and getting blatantly gawked at while at the gym and having photos/videos taken of you while there, without permission.”

“If you’re beautiful and feel good about yourself, you get unwanted s**ual attention and creepy guys bothering you

If you don’t look good, you get people dismissing you as a person and treating you as less than

There’s this polarity that feels dehumanizing either way.”

“The idea that women are just some spin-off of men.

Example: Only recently has it become more common knowledge that women experience heart attacks differently than men, because men’s bodies and experiences have just always been considered the default.”

Cars are designed to fit men and so are the safety settings.

Women often times get CHEWED UP by airbags cause we gotta sit hight up and closer.”

I h**e it with a passion, because I want to be strong like a guy. It sucks not being able to lift things, not be as fast, and to have people think you need protection or help all the time.”

“You can’t win whatever you do.

You are beautiful, you’re shallow and probably dumb You are not cute, you’re a slob You’re skinny, trophy wife.

You’re fat, disgusting pig You’re smart and independent, too aggressive and not approachable You’re not too bright, gold digger bimbo.

There is always something people just find to criticize.”