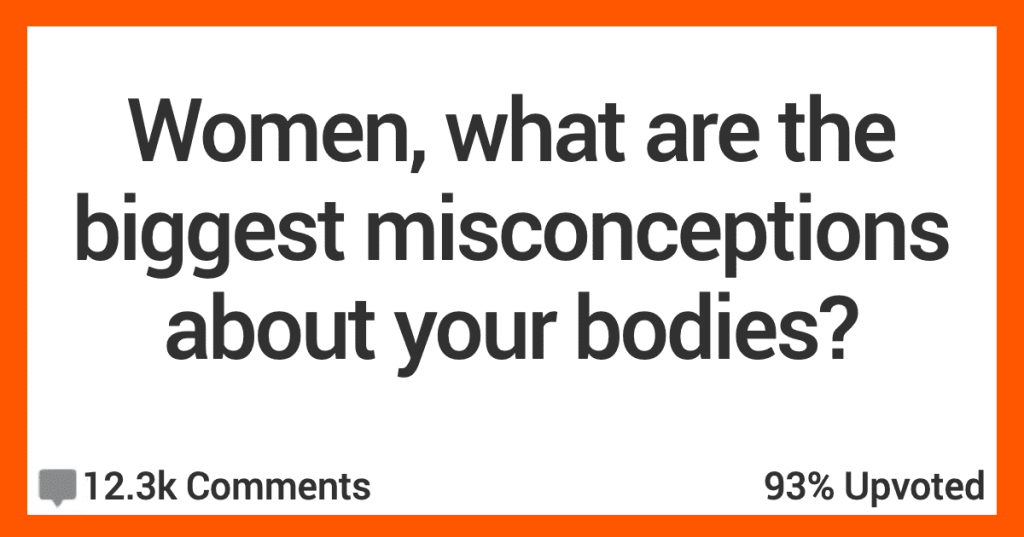 12 Women Open Up About the Biggest Misconceptions About Their Bodies

Because some women on AskReddit were nice enough to open up about the biggest misconceptions about their bodies.

“Only a select few will have a natural and healthy thigh gap.

It is by far not the norm. “P**n star” vulva is also relatively uncommon.

Also, what worked on your ex’ doesn’t necessarily work for your new partner, so ask, ask, ask!”

“My partner thought the wings of the pad stuck to the legs rather than the underwear.”

“I’m an electrician, surrounded by men all day.

One of them legitimately thought we peed out of our cl**oris.

“Having intercourse can strengthen the v**inal muscles and make a girl feel tight.

Way too many men believe woman who have enjoyed intercourse are “loose” or worry about the size of her previous partner/s.

The v**ina stretches to accommodate different sizes and constricts afterwards back to its regular size.”

“I swear I wish I was making this up, but I had one guy ask me if it’s true that our v**ina “closes” when we get to our menopausal age.

“When they tell you “don’t stop”, don’t stop! Keep going the same way, don’t change it up don’t ad anything to it or take away from whatever your doing!

They like it and are probably gonna c** from whatever you are doing.”

“Pregnancy really f**ks a body up.

There’s still a lot of stigma about talking about it but it’s not just getting big and then popping out a baby. Your abs can separate, your v**ina can tear, most care kits for new moms involves a lot of numbing spray for her body that is ripped apart.

If your wife has recently given birth she’s going to need you to be a superstar of support. Tuning out and letting her take the lead because you can’t breastfeed is about the worst thing you can do for your marriage.”

“Just how much different types of birth control affect our bodies.

The combination pill turned me into an unfeeling and distant person.

Switched to an IUD after two months to feel like a person again.”

“Stretch marks are the most normal things in the world! Treat them accordingly.

An ex friend of mines old boyfriend got her naked and saw them and asked her, horrified, how she got hurt.”

“Just because we are tight doesn’t mean we are a virgin. We are probably either uncomfortable or just built that way.

Once had a conversation with a boy who tried to convince me (a woman) that I’m wrong and he’s right. He was a Virgin.”

“Miscarriages are not, in my experience, a quick over and done with situation. My miscarriage started out as spotting and I immediately got nervous.

Went to the ER and of course found out ultrasound was picking up no heart beat. HCG levels were falling. I was not given a D&C. I was sent home and had the worst “period” of my life at the point for over a week. There was a lot of painful cramping, blood went from spotting to full force to chunky. My hormones went out of whack and I broke out like I was in puberty. I was physically and emotionally and mentally a wreck.

If your partner is or ever suffers a miscarriage, even if they didn’t want the little bean, it’s still a huge event and just be there for them.

And don’t tell that person things happen for a reason. I heard that a lot that week. Though it might have actually been what found my thyroid condition, I still don’t consider my miscarriage and my loss some trivial reason to have found another medical crises. I really wanted that baby. It was early on so I’ll never know what it was but my heart always sticks to the feeling it was my little boy.

And if the person who lost a pregnancy still thinks about it, or still feels sad and it comes to their mind now and then, just let it rush in and then back out. Like a wave, sometimes we just need to wade in the waters.”

Do you have anything to add to this?