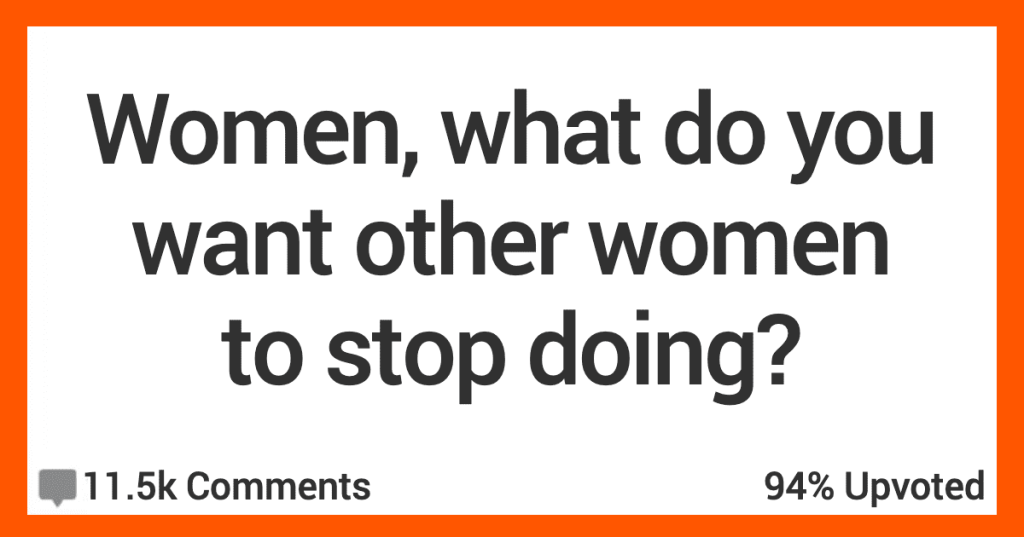 12 Women Shared What They Think Other Females Would Stop Doing

Ladies, we think you need to pay attention to what you’re about to see.

Because women were nice enough to open up on AskReddit about what they really want other females to stop doing.

So put on your reading glasses and let’s see what these women had to say!

“Make nice with your daughter in law.

Stop being sh**ty about her “taking” your son and you’ll be asked to be a part of more that they do.”

Not gonna be a d**k or anything, I’ll still be cordial.

But I’ve had women rush up to me all smiles and hugs like “oh my goood you came, I’m SO glad you’re here!!” And then find out sometime later that Audrey really does not like me at ALL.”

“Using their own issues to invalidate other’s issues.

Just because you believe you’re suffering worse doesn’t mean I’m not allowed to be upset about the things I’m going through too.

It’s not a fight for who gets the privilege to b**ch and moan about their circumstances, why can’t we all just recognize that everyone has different depths to what they can handle?

I may not have been been crippled in a bus accident, but I can still be anxious about my credit card debt, Karen.”

“Stepping down on other women at the workplace, and not letting them advance in their careers, based on rumors you started.”

Put some TP on the seat if you’re that worried about germs.”

Ugh, that s**t makes me cringe from secondary shame.

I am embarrassed to be a woman whenever I read an article about some k**ler who got lots of press because his crime was unusually awful, who then gets tons of “fan mail” from strange women to his prison cell.”

His kids will have to ask prospective partners for a DNA test in future.”

To be clear, I’m not talking about trying to eat healthier or even trying to lose weight in a healthy way.

I’m talking about the overwhelming number of women I know who go on these bizarre diets with fasts and cleanses and they don’t eat carrots or they count how often they poop or … I dunno.

Weird s**t. Then it becomes their entire personality for a while and it’s all they talk about.

It always gives me strong vibes of a person who feels out of control in some aspect of their life trying to regain that control in another, and it makes me horribly sad.”

I have had two women, separate occasions, try to get me fired. The lies and gossip they spread and the accusations were insane.

Empathy should be easy for us to have toward one another and I don’t know how a person can do those things to another person, let alone women to women.”

“Claiming we cannot critique other women or call out harmful behavior because being a feminist means supporting all women no matter what they do apparently… so silly.

In my opinion being feminist means we should reckognize that women arent just docile little dolls who only do nice things, but that we are messy humans that make mistakes or even hurt people on purpose.

And in order to be a better society we need to not be afraid of calling out harmful behaviours among our communities.”

“Insulting themselves/appearance all the time.

“Trying to find a feminine norm.

Whether I breast or bottlefed someone talked s**t. Whether I’m skinny or thick someone talks s**t.

Most of the time it is other women. Stop sneak dissing and being jealous and just give out a compliment if you must say something.

And I can simultaneously enjoy sewing and cooking and cleaning and crocheting.

Please stop trying to fit other women into some made up feminine box.”

What do you wish other women would stop doing?