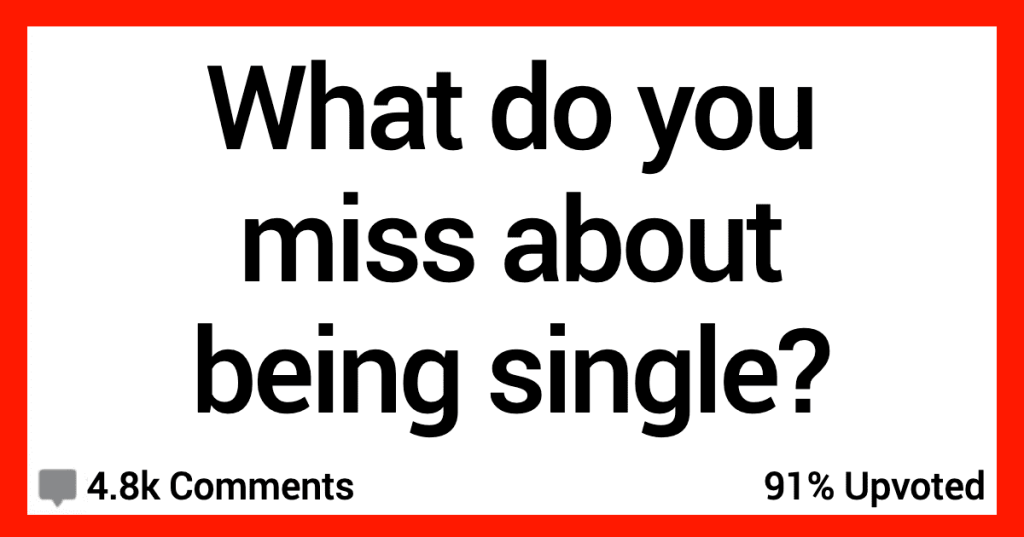 13 Married People Admit What They Miss About Being Single

Whatever the case, we’ll think you’ll enjoy hearing from married AskReddit users about what they miss about being single.

“Not sleeping next to someone who snores.

My SO works nights a few times a week so I get some snore free nights… unless I have the dog.

I’m already a bad sleeper and it takes me hours to settle. So the snoring can be rage inducing, especially when it’s him and the dog snoring one constant snore stream.”

My husband grew up poor and lost most of what he did have in a fire. I believe that’s why he’s a hoarder now.

He gets irritated at me for packing up his stuff in an ongoing (and losing) effort to have some liveable space. Maybe AITA for boxing up his stuff but we’re talking things like impulse Ebay and Amazon buys that he lost interest in as soon as they arrived and didn’t even take out of the package, years of junk mail and magazines that he “is going to read when [he] has time”, and broken electronics that are beyond repair.

Most every flat surface is piled up and there’s boxes, totes, and trash bags chest high in every corner. I can’t keep the house adequately clean because it’s just so hard with all the stuff and there’s no place to sit. I won’t let anyone come over because I’m embarrassed but he honestly doesn’t see a problem.

He refuses to get a storage unit because he wants it all where he can easily get to it whenever he wants. His “solution” is that we need to start looking for a bigger house.

I love him and I don’t want to not be with him but sometimes I fantasize about a little, shiny clean space with just the basics, like I used to have.”

“If I have the next day off, I’d rather stay up all night enjoying myself and sleep until late afternoon.

As a married man I don’t do this because 1. I enjoy hanging with my wife and 2. Don’t want her to think I’m a bum.”

“Having just my own stuff in my space. My husband is a pack rat (I won’t let him truly be a hoarder).

It feels like I never stop cleaning and organizing. There’s a constantly encroaching mess and I’m the only person who cares to do anything about it.”

“I miss the general freedom and ease that being single brought.

It’s hard to imagine when you are single that something as simple as changing clothes and going to the beach is a big deal, but when you have kids it’s a 1-hour pre-plan, a full car, and (sometimes) a sore back for the rest of the day.

It’s easier just to do something in the backyard and call it a day.”

“Free time, sleeping by myself, peace and quiet.

“Those initial feelings of infatuation w a new love interest, like being able to experience a first kiss again.”

“Not having to do laundry every other day.

When I was single, I could get away with doing laundry twice a month.

Now I’m lucky to make it a full week without doing a load.”

9. Stop with the questions!

“Not constantly having to explain why I did something the way I did it at home.

Gosh dang do I miss just doing a chore, project, or what ever the way I preferred and not feeling the need to explain and justify my methods.”

“Not speaking. When I get tired / stressed out, I don’t want to speak, I just want to zone out.

My wife does the exact opposite. She will talk to me incessantly. And not just like telling me a story, she constantly demands my attention by telling me to look at something or asking me a ridiculous question, like “When we go on vacation in 6 months, what time should we call the cab to the airport? Do you think it’s gonna rain?”

She just wants to interact with me, which is sweet, but I just want to leave my body for a bit and stop interacting.”

“Doing any of the following without being silently judged: Getting dr**k before noon, eating top ramen for every meal in one day, watching crap tvv and eating ice cream in bed for 8 hours on my day off, playing video games at midnight (probably high af), deciding to rearrange all the furniture in my house for no reason…

To be fair, my husband probably wouldn’t care if I did these things on occasion, he would just be annoyed if this was how I lived.”

Having the house to yourself all the time alone

Talking to yourself – -alone

Did I mention being alone?”

“That delicious buzz you get when you’re on a night out with your crush and you know in your gut you’re going to hook up.

The entire night is one long foreplay of stolen glances and s**ual tension… I miss the wonderful agony of the chase sometimes.”