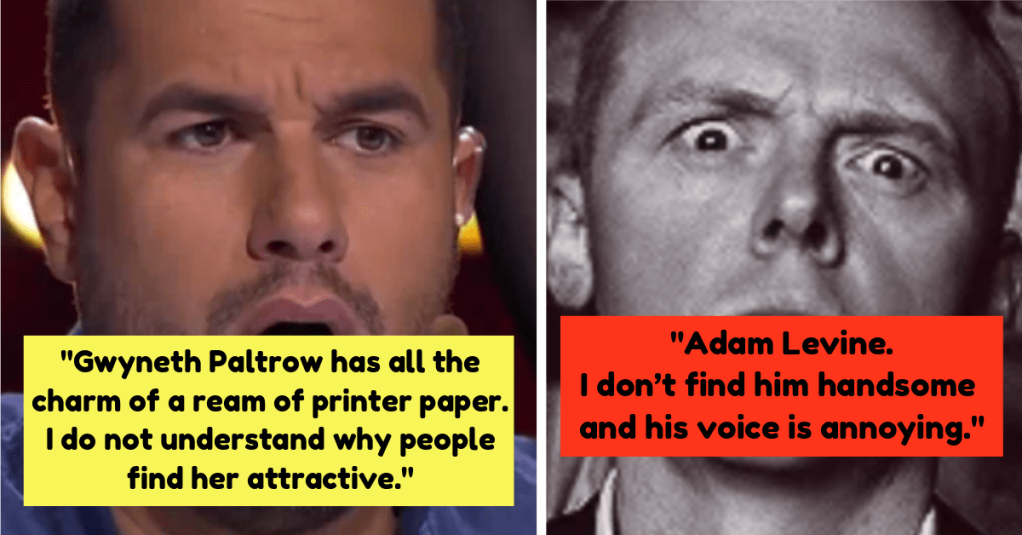 Who Do You Find Unattractive That Most People Like? Here’s What People Said.

Variety is the spice of life!

But still, there are some things that most people seem to find attractive out there.

Let’s hear from folks who just aren’t feeling it…

She’s by no means ugly but just don’t think she beautiful.”

“Gwyneth Paltrow has all the charm of a ream of printer paper.

I do not understand why people find her attractive.”

She’s not necessarily ugly, but she just seems really plain, not really any unique features.”

“Channing Tatum looks like he drank too much and is falling asleep.

He has nice abs but he looks like he chugged a fifth of vodka and is passing out at a college party.”

“Based off of the majority of people online…

“Apparently Benedict Cumberbatch is considered attractive and I DO NOT UNDERSTAND.

To me his face is the equivalent of plain oatmeal. My best friend thinks I’m ridiculous for this opinion.”

I don’t find him handsome and his voice is annoying.”

I get that s** sells but she’s so childlike, it makes me really uncomfortable.”

My friend claims he has “one angle” but I can’t find a single one.”

“Charlize Theron is a weird one because I absolutely see her as beautiful but she’s got that uncanny valley android look about her that puts me off.

Alexandra Daddario has it too, super pretty but something about those eyes makes me want to prepare for her to peel off her face and assimilate me”

At peak Walking Dead hype I heard so many people talk about how s**y he was and I never understood it.”