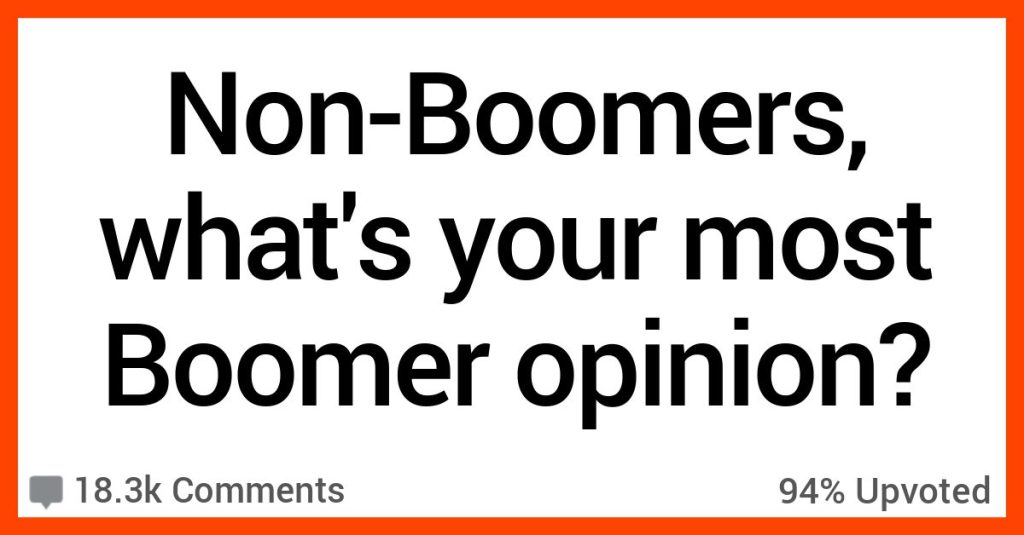 13 Non-Boomers Shared Their Most Boomer Opinions

Those insurance commercials you see all the time lately about people turning into their parents are so on the money because they are 100% true.

I was hanging out with one of my sisters the other day and she said to me, “you’re really turning into Dad.”

Hey, I guess it happens to all of us at some point, right?

Non-Boomers, what’s your most boomer opinion?

AskReddit users got real. Check it out.

“I don’t want the manufacturer of my refrigerator (or oven, or lightbulb, or vacuum, or whatever basic f**king appliance) to be able to push a software update or something that makes me unable to f**king use it unless I pay some kind of fee.

“Enough with filming everything and putting it online.

I’m fine if you take a short video or a few photos to look back on, but you don’t need to share your two minute video of the fireworks you watched on July 4th.

Nobody cares, and you end up wasting your time looking more at your phone than at the firework show.”

“I don’t really understand the core benefit of “read” in messaging apps or “seen”.

Fundamentally, it just seems to create an unhealthy scenario that puts pressure on the receiver and unhealthy expectations from the texted.”

“When you have friends over you’re not supposed to be on the phone all the time.

“People’s driving is getting progressively worse.

I have to honk at someone a few times a week to move at a green light because they have to check Facebook everytime they stop.”

6. Be smart with your cash!

“Quit spending money on stupid stuff that you won’t want in a year and put it towards saving for the future.”

7. What happened to Hank and Johnny?

“Country music has gotten much worse.

“Having your kid go “viral” for some stupid thing he did or just crying is a way to humiliate them and you are a disgusting parent for making the whole world laugh at them.”

“Deciding to have children with your significant other is a bigger commitment than getting married.

I don’t understand couple’s who are in their 30s and decide to have children together but refuse to get married because that’s too much of a commitment. It boggles my mind. How does sharing a child for the rest of your life not scare you away but signing a legal paper does freak you out?

I have a few acquaintances who are in their mid 30s and in long term relationships where they’ve had kids but refuse to get married because they’re afraid of getting divorced.”

I only read books that are printed on paper.

You can’t even go to the bar or gym with people without them totally ignoring something you say because they’re on their phones checking Instagram or some other pointless trash, and these are the same people saying I’m rude because I don’t respond to messages instantly, take a look in the mirror lol, not like I have a life outside of my phone or anything…

It’s not just the people I know, I see it all the time, I’ve been cutting down my usage of all social media because now I just think “what’s the point in this?” it’s just people I don’t give a s**t about in real life sharing absolute garbage.

I only have Facebook, Twitter and reddit and can barely stand those three, I go on every now and then but it doesn’t last long, rather spend my time doing something I actually enjoy instead of clicking on random posts to get a quick dopamine hit.”

“Our society is wayyyyyyy too materialistic.

Most people can’t go one year without “upgrading” their phone or buying the latest and greatest GPU.

“That people who think most Boomers had an easy and trouble-free life need to open a history book.

It’s true that Millennials got s**t for no good reason. But as someone with Black Boomer parents, I can tell you that they’ve seen and experienced some real s**t.

My parents aren’t perfect. No one is. But they are resilient AF because of their life experiences.”

In the comments, tell us about your most boomer opinions.