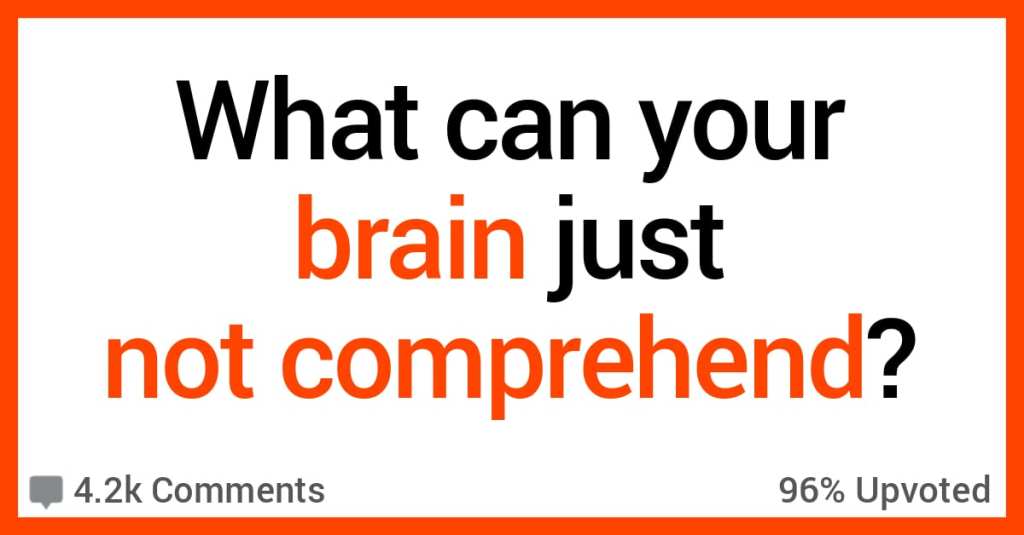 I really enjoyed going to school when I was younger except for one thing: MATH.

I was so bad at Math and no matter how many times I tried to wrap my head around all the concepts, I just couldn’t grasp them.

I mean, I know how to add, subtract, and do the basics, but once formulas get involved, forget about it. I’m OUT!

And, FYI, there are plenty of other things that I don’t understand, either…just thought I’d throw that out there…

People on AskReddit opened up about what they just can’t comprehend.

“How so many people relatively recently are going down these conspiracy rabbit holes. I get that its social media by and large, but I don’t get why so many people are being fooled by this obvious bulls**t.

As an example, my dad is one of these people. His new thing is that Biden isnt even Biden. His proof is something about his ears being different. Its madness.”

Dark energy, and it’s existence in every single inch of the universe.

Also the idea of an eternal life is really difficult to understand, and almost seems cruel at some point.”

“Honestly cannot grasp the concept of there being nothing before the universe was created.

Like I just imagine a big black empty space, but then it’s not nothing, it’s still space.”

“How many ants are on/in this planet.

What if one day they ALL just sync up on some kind of frequency and decide to wage war against humans, or any other species.

Imagine the chaos that would ensue.

What would our defensive options be? Would we flood them out? Would we bomb them? Spray them? Would we even win???”

Why does our body have to shut down? How do some of us not have any dreams at all and others of us dream every night. What even is a dream? How do we even remember our dreams in the morning?

I love sleeping but I just don’t get it…”

So you put two pieces of polarized glass on top of each other and angle it so light doesn’t pass through. That’s it, it’s opaque no light is passing through. Then put a third piece over that and light can pass through it?

I’ve seen explanations of how this works. It’s something about quantum probability but to me it’s just magic.”

“Engines and how my husband can comprehend them.

That someone just thought up all those parts that work together in perfect harmony to produce motion/power. My husband loves anything mechanical. Can pull apart and put back together anything.

Does all the servicing and repairs on our vehicles, machinery and tractors at his workplace with no formal training. He is really a marvel to me. I just stand there uselessly and pass him tools, often not the ones he asked for either.”

“I’m a simple man. I don’t get how planes work.

Yes, I’ve had it explained to me by aerospace engineers. Hell, I’m an engineer myself.

But I can’t fathom tons of metal staying aloft for thousands of miles.”

Just the idea of a bunch of people worshipping something they’re not even sure exists and talking to them.

Alternatively, the idea that we are so small in the universe we have to ask help from a greater being. And the idea that that being might have a religion to something bigger and so on.”

“As someone in the service industry, the entitlement of people is so mind boggling.

I really fail to see how these people see and process the world.”

“Why people fight against veganism.

How can you be in favor of unnecessary k**ling? in favor of k**ling just because you want something out of them (in this case you can eat alternative products made from plants that are awesome as well).

Imagine if your logic was used in another scenario e.g. people will eat animals for pleasure which you can get elsewhere but then crucify people that use animals for monetary gain and their pleasure such as dog fighting.

You’re probably thinking about the dog fighter, “what a savage, wtf is wrong with that person?”, but it’s your own logic.

I tried arguing against veganism but couldn’t find a logically consistent justification so I went vegan to align with my morals. Most people don’t. They instead h**e on vegans which I don’t get how it justifies anything.”

All the fancy ones I can watch being done in front of my eyes and I still don’t get why it works.

Must have a smooth brain.”

“Mostly, I struggle to comprehend people.

Being a more non confrontational person and a very live and let live kinda guy, I just don’t understand why so many people are aggressive and want to forcefully insert themselves in others lives/decisions that don’t impact them.

I’m a very agnostic person. “The only thing I know is that I know nothing.” I can’t imagine being so certain about much of anything that I’d think I should have say so over what another does with their life, yet those people seem to exist everywhere.

Think it’s sort of the dunning Kruger effect, but then, why are the dumbest people oftentimes the most confident? People frustrate me.”

Okay, friends, now we want to hear from you.

What can you just not wrap your brain around?