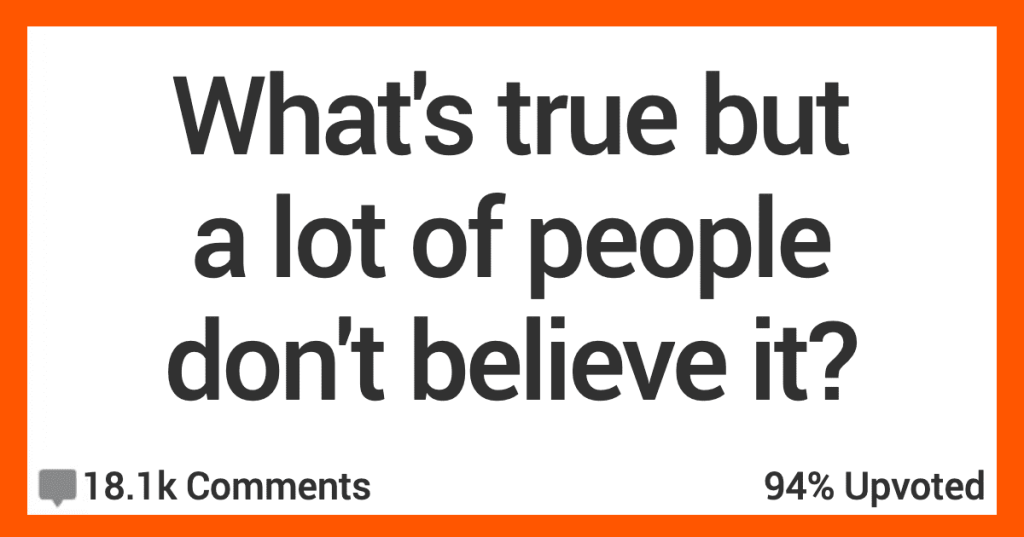 Who’s ready to get crazy?

Okay, now who’s ready to get crazy AND true?

I knew people would be fired up about this article from AskReddit!

Check out the crazy but true things that folks shared.

“Humpback whales will turn on their back and let seals jump on their stomachs to save them from orcas because they f**king h**e orcas.”

“Birds require gravity to swallow food because they have no sphincter.

Because of this, birds would starve in space”

It’s weird because the karate kid was still supposed to be under 18 and the villain was supposed to have fought in Vietnam.”

They need to have a high BP to get the blood all the way up the neck to profuse the brain with oxygen.

I am thoroughly impressed by their cardiovascular system.”

“Komodo dragons usually reproduce s**ually, but females in captivity have been known to reproduce by parthenogenesis, without the need for sperm.”

“The shortest commercial flight in the world lasted 57 seconds.

It was a Loganair flight between two Scottish islands, Westray and Papa Westray.

It was recorded the shortest commercial flight, with the distance of 1.7 miles.”

“Humans can smell some components of the smell of rain (the geosmin part of petrichor, specifically) far better than sharks can small blood in water.”

“During the Victorian era it was super popular to have mummy unwrapping parties and the party would normally include eating the mummy.

It had something to do with the material that was used to preserve the mummies.”

“Antarctica is the world’s largest desert.

Knowing this once got me 10 cents off a cup of coffee.”

“An infinite supply of food would not solve world hunger.

We actually have more than enough food to end world hunger, the issue is with distribution/logistics.”

“People only notice when things don’t work, not when they work.

So people think trains are late and that it rains way more often than in actuality.”

“We have no clue how eels reproduce.

We have no evidence of them ever breeding and giving birth, they just don’t in captivity and in the wild they just disappear and come back with more in tow.”