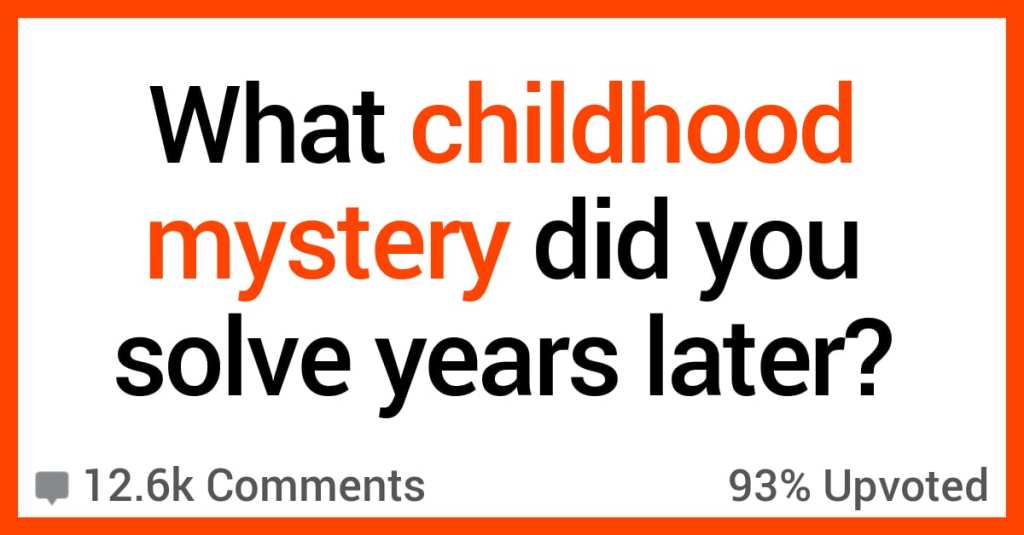 When we’re young, our heads are filled with questions.

Why is this happening? Why do my parents act that way? Why is my Uncle Tony not allowed in the house anymore? You know, the normal stuff.

And sometimes when you get older, you find out why things went down a certain way and why things were kept secret from you.

AskReddit users shared childhood mysteries that they ended up solving later in life.

“When I was 4, I vividly remember getting into my mom’s car and her telling me that our cat had died.

She told me how she rushed him to the vet and he was shedding fur; something was seriously wrong. Despite her best efforts he died. I never knew why he died, and why it happened so suddenly, but I accepted that it happened.

Fast forward about 15 years, I’m home from college for Christmas. On Christmas Eve, I’m out driving to the store with my dad and uncle. They are talking about the cat my parents got for Christmas one year (the cat mentioned above). My dad says “yeah, that thing was too aggressive, so I took it to a farm and gave it away.”

Normally, when the family pet dies, the parents lie to the kid and say it “went to a farm upstate somewhere” to ease the burden. Not my parents. They told me the horrifying “truth” even though it wasn’t, you know, true.”

“My father used to take us camping and on hikes and bike rides.

He taught us about safety in the woods and on the water and how to navigate using maps. So it wasn’t all that strange when he said one day (I was maybe 10) we were doing a game where we’d be blindfolded and taken on a drive.

The object of the game was to call out what direction we were turning by feel and then ultimately after driving about 30 minutes give a guess roughly where we were and which direction home was in. He was impressed how well we did, and we took off the blindfolds and went for a hike. I never thought much about it.

Years later I realized why we played the game. My dad was in criminal psychology, especially s*x offenders. He was kidnap proofing us but in a lighthearted way so there was no fear or trauma.”

“My dad used to say he could stop the rain for a moment by snapping his fingers.

He’d do it in the car, when it was pouring. I was so mesmerized; told all my friends about it, well into late elementary school.

I’ve since realized he’d snap as we drove underneath an overpass.”

“My dad is an ex-Catholic, and every night when he’d tuck me in until I left the house he’d say “We love you. God bless you. Goodnight.” And I was always wondering why, since he had stopped going to church long ago.

Fast forward to me being 28 years old and watching an old Bruce Springsteen concert together (one of his favorite artists), and Bruce says, “We love you. God bless you. Goodnight!” at the end of his set.

I turned my head towards my dad and asked if this is why he’s said that for years to me at night. He laughed and said, “I have no original material.””

“Who ate all the cherries in the cherry cake.

I was blamed for this for YEARS after someone picked out all of the cherries and ate them during a family Christmas party.

8 years later my little sister confessed to me that it had been her.”

“The mystery of why my mom never ordered anything for herself and was never hungry whenever she took my sister and I to eat out.

25 years later, she told me she really was hungry and wanted to eat too but she only had enough money to feed the two of us.

She didn’t want us to feel guilty. I love my mom so much.”

“When I was little I used to have this experience where all of a sudden my perception of size and distance would get all wonky.

I would look at everything around me and it would all look small and far away. And I always felt like a giant yet when I looked at my hands they’d be so small. This only ever happened at night. I would usually get up, go downstairs, walk around a bit in the kitchen, and then it would fade away and I’d go back to bed. I told my mom once “the windows are far away” and she just brushed it off.

Fast forward many yrs later it turns out I had what’s called Alice in Wonderland syndrome. Kids get it sometime and then stop getting at like 10-12 yrs old. It’s apparently harmless.”

“My dad and sister used to play pranks on my dad’s secretary.

When we grew up he admitted that he was having an affair with her.

It makes my skin crawl thinking that he used my oblivious little sister to flirt with this woman behind our mother’s back.”

“Every time I saw a car that said SHERIFF I believed it was, like, THE sheriff, probably because I watched too many Westerns.

I was a legit adult before I learned about the concept of a sheriff’s department.”

“Steely Dan was playing and I heard my dad say to my mom “do you know what a steely dan actually is?” And then he whispered to her.

Killed me that I didn’t know but I knew it was inappropriate and he wouldn’t tell me. Earlier this year he finally told me that it’s a term for a d*ldo.”

“In kindergarten I had a guinea pig that turned into many guinea pigs after I babysat the class guinea pig for Xmas break.

Anyway, my teacher took the entire family back to her house and was supposed to sell them, and I would get my original guinea pig back. They never returned and my parents told me they all got sold together as one big happy family.

I didn’t find out until I was maybe 25 that a coyote actually got into the cage and they all got eaten together as one big happy family.”

“When we were kids we’d ride our bike up the road to this horse ranch that sat up on a hill. So many memories on that hill. Anyways in the distance was a huge hill that was eventually bought and turned into a winery. This hill was covered in trees minus the bare area that faced toward us.

Well on one autumn afternoon my best buddy and spotted something very furry walk on two feet from one tree to another. This hill is likely hundred of yards away from us. And whatever we saw was clearly bigger than us. Since the sun was setting it obviously scared the shot out of us and we screaming down the road on our dirt bikes away from whatever that thing was.

Turns out many years later that I discovered what my buddy and I saw was likely a bear walking on two feet. For nearly a decade my buddy and I would’ve sworn we saw a Bigfoot.”

“My grandmother is extremely religious.

Despite this she was surprisingly chill about both my sister and me having children out of wedlock. Never made much sense why she was so understanding when I knew she did not approve.

Cut to my wedding, after the ceremony she calls me over and puts a ring in my hand. It was my late grandfathers wedding ring (it was a gift which I wore for as my wedding band for many years) Once I started inspecting it I saw there was an engraving on the inside.

It was my grandparents initials and the date of their wedding. That date was AFTER the day my mother was born. Ah yes I realized, “she’s rotten just like us.” Lol.”

Did you ever solve a childhood mystery later on in life?

If so, please tell us all about it in the comments. Thanks in advance!