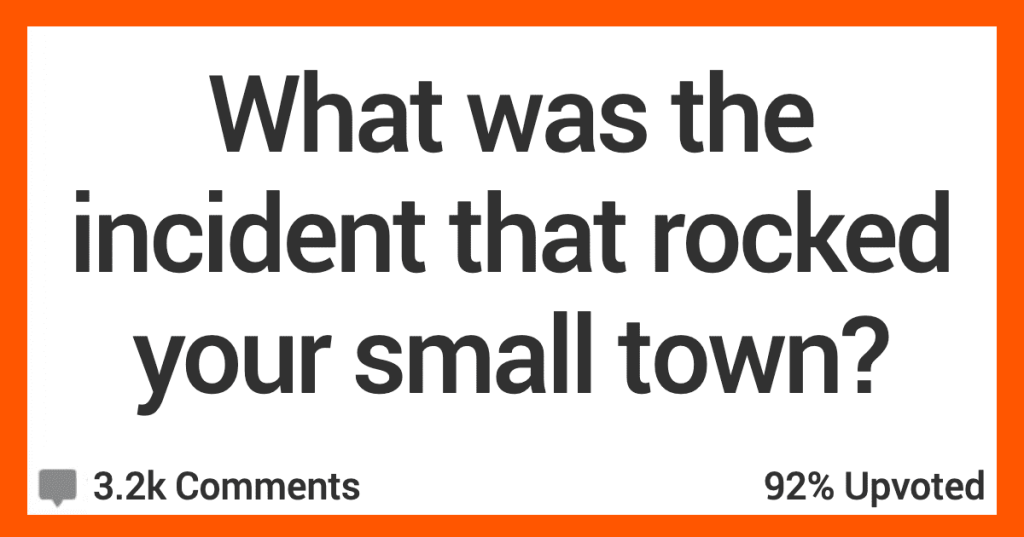 It’s hard to keep a secret in a small town.

In fact, it’s almost impossible, because everyone knows everyone else’s business and news travels like wildfire.

And when something scandalous happens in one of these places, it rocks the entire community.

Check out what AskReddit users said about the scandals that rocked their small towns.

“A light shining into the sky a couple times from out in the woods.

Police went out to check it, found a man no one knew in a cabin no one knew of, LOADED with guns and ammunition. When asked why he had so many, what he was doing shining a light into the sky…

He was sending a beacon to the aliens because they told him to shine a light to guide them, when he had things ready for them…. Yeah.”

A flock of sheep kept on the town green migrated through a broken fence into the adjacent cemetery.

The sheep became known as the “Lamb-scapers” because they did a better job of manicuring the cemetery grounds than the maintenance person.”

“Guy in my high school knocked up the daughter of the local fitness center owner. The owner offered him a car to leave his daughter alone and not be a part of the baby’s life.

He accepted the offer and took the car. Once she gave birth, they ran away together in the car. The fitness center owner found them, torched the car, and threatened to k**l the guy.

They fought and the baby daddy won. This apparently garnered some respect from both men and now everyone seems like a happy family.”

“Small town in Missouri. Bianca Piper, it was 2005, supposedly she went for a walk after a fight with her mom and was never seen again. I was a junior in high school and skipped school that day.

My friends and I freaked when we saw cop cars and helicopters out EVERYWHERE. Thought they were looking for us. Everyone here has always said her mother had something to do with it. Her older sister got arrested years later for a s** trafficking thing in St. Louis I think.”

“A wealthy couple were brutally m**dered in their home by an adult daughter and her boyfriend.

It was rumored they had a ton of money stashed in the house.”

“A guy robbed the bank then ran to his home to hide… that was down the street.

Took the cops an embarrassingly long time to get him.”

“Pastor’s son got caught jerking it to gay p**n in the walk in freezer at the Pizza Hut.

He did not work at that Pizza Hut.”

“40-something d**nk man who broke into the high school dressed as Batman to prank scare the high school classes by staring in the windows then running away giggling uncontrollably to appear somewhere else on campus and scare a different class.

There was an hour and a half long lockdown and he ended up found and arrested.”

“A little over 30 years ago, the police and fire departments played in a charity basketball game that raised funds for DARE.

Shortly after the game, some of the cops that played gave short anti-drug speeches for the crowd. Early the next morning, state police came into town and arrested a lot of those cops for being part of a local drug ring.”

“Teacher swinger-s** ring got exposed. Everyone in the school and their parents found out pretty quick.

“I live in a little town next to the sea.

One time during his morning swim a guy found a body on the bottom of the sea a few meters deep, with weights attached to him.

For weeks we didn’t know if it was m**der or s**cide, pretty scary.

“A very addicted individual walked into the pharmacy with a g** demanding suboxone. Once he got it he told everybody to get out and started ruffling through the shelves.

Police came and cordoned off the whole block and spent 5 hours trying to negotiate with him. They eventually raided the place and found it empty, the man and a great deal of paink**lers mostly, gone without a trace. They never found him…”

“Sheriff in my town was divorced twice, married three times.

To the same woman…”

Were there any scandalous stories that rocked your small town?