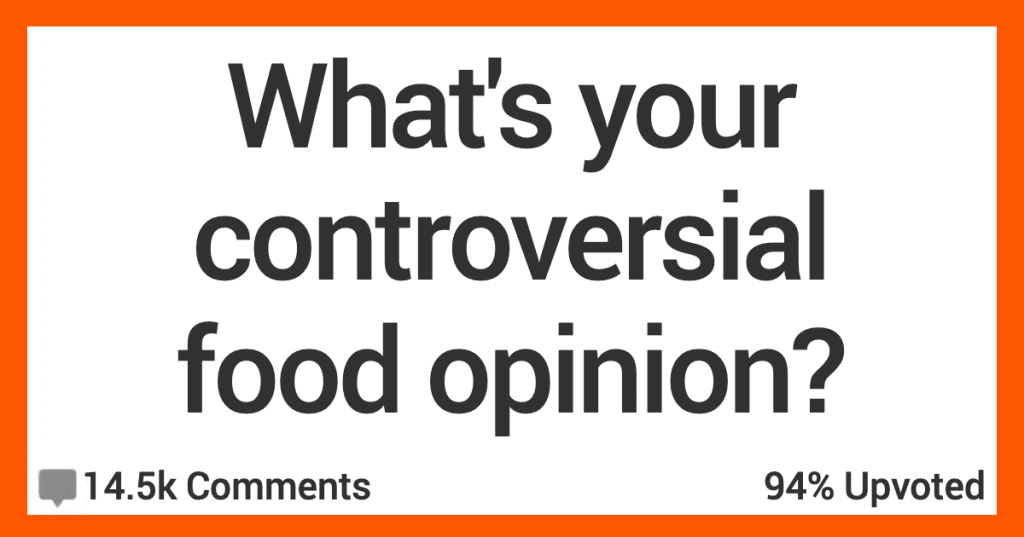 I don’t know if it’s because everyone on the planet thinks they’re a “foodie” now or if it’s because there are 8 million cooking shows on TV, but people these days tend to get fired up about their food opinions.

And when someone throws something controversial out there, it REALLY gets people talking…and yelling.

Check out what AskReddit users had to say about their most controversial food opinions.

“Sandwiches overstacked with meat are usually very low quality and f**k up the bread.

“The McRib should stop coming back.

Just like a Kiss tour. “They’re saying farewell! For real this time! I promise! We’re serious!””

“Entire sleeve of crackers in my soup and chili.

The chili basically has cheese, crackers, and Fritos added until it’s no longer a liquidy texture.

You could sculpt a bust from a bowl of chili after I’m done adding the crackers.”

“Spaghetti is such a terrible noodle shape for red meat sauce and it does not deserve to be the default for “spaghetti and meatballs.””

“There is not a cupcake on earth that can compete with a good blueberry muffin.

“Too much cheese on pizza is bad, after you eat 2 slices it feels like a brick in your stomach.

There also is a toppings to crust ratio, if you want a lot of cheese, deep dish style has the proper amount of dough and sauce to balance it.”

I’m amazed by how many calories they stuff in those things with so little flavor in return.”

“I resent food. I don’t like eating every day.

I’d switch to photosynthesis if possible.”

“Lobster is not that great.

And it’s definitely not worth the price or effort to eat it.”

“I used to deliver pizza.

A pineapple, jalapeno, and pepperoni pizza was my jam.”

No need to peel them first, just wash them.”

“Wines can have differences in qualities and flavor profiles, but 90% is just snobbish posturing and “vino” jargon.

No, I don’t taste the notes of maple, mace and nutmeg in the Chardonnay, I taste Chardonnay.”

“Ice cream belongs in a brioche bun, not some cone.

It is… so, so much better. It’s popular in Sicily where I grew up – don’t even see it in the rest of mainland italy.

All of my American friends think I’m on crack when I explain this.”

“The best burger I ever had was topped with peanut butter, grilled onions, and jalapeños.”

“The ‘holiday dinners’ everyone loses their s**t for are the most boring food imaginable.

Turkey, roast beef, ham, mashed potatoes, etc. They’re bland, they’re boring. They are only ‘special occasion’ meals because they are high effort and they used to be very expensive and our ancestors couldn’t even access those foods on a regular basis so they couldn’t eat it all the time.

A decent modern burrito kicks the s**t out of all the ‘holiday meals’.”