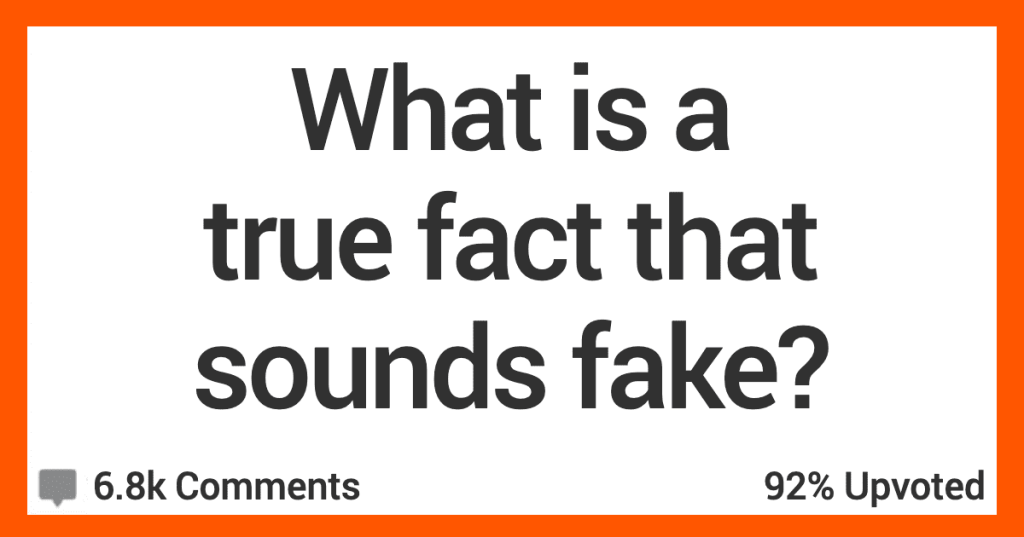 The world is so full of mystery and amazing wonders that it can’t be hard to believe some facts really are true.

But that’s why we should all strive to be lifelong learners and embrace the wild, the weird, and the wacky!

And these AskReddit users were nice enough to share true facts that sound fake.

“Female dragonflies drop out the sky and pretend to be d**d to avoid unwanted male advances.”

“Dinosaurs were around for so long that there were already dinosaur fossils while they were still alive.

Basically, as T-Rex was munching away on Triceratop steaks, Stegosaurus had already been d**d and underground for millions of years by that point.”

The Egyptians were using split reed, the precursor to fountain pens, in 3200 BC.”

“Did you know that touching a manatee is illegal?

It’s punishable under the Manatee Sanctuary Act, with a fine of up to $500 and/or a jail term of up to 60 days.”

“Australia has the largest amount of wild camels in the world.

There are more pet tigers in Texas than there are in the wild of the entire planet.”

“The day Michael Jackson’s hair caught fire while filming a Pepsi commercial was the exact middle of his life.

“Humans can smell geosmin (the chemical released when it rains or snows) at 5 parts per trillion.

Which means that humans are 200,000 times more sensitive to smelling geosmin than sharks are at smelling blood.”

“The Greenland shark has a life expectancy of between 250-500 years.

That means there could be a greenland shark swimming around, that swam the oceans when the Spanish conquistadors went to search Mexico for gold, which at that time was inhabited by the Aztecs.”

“Elephants really do have great memories. Earlier this year, an elephant k**led a woman.

A few days later it escaped its enclosure and traveled 130 miles to rip her out of her casket at her funerals and sling her body around.

Idk what she did to that elephant, but it did not forget.”

“The chainsaw was invented to aid in childbirth.

It was used and invented in the 1700s to cut through the woman’s pelvic bone before C-sections became the commonplace way to deliver babies.”

“There are more trees on earth than stars in the galaxy.

I didn’t believe it myself at first…”

Share some more facts with us in the comments.