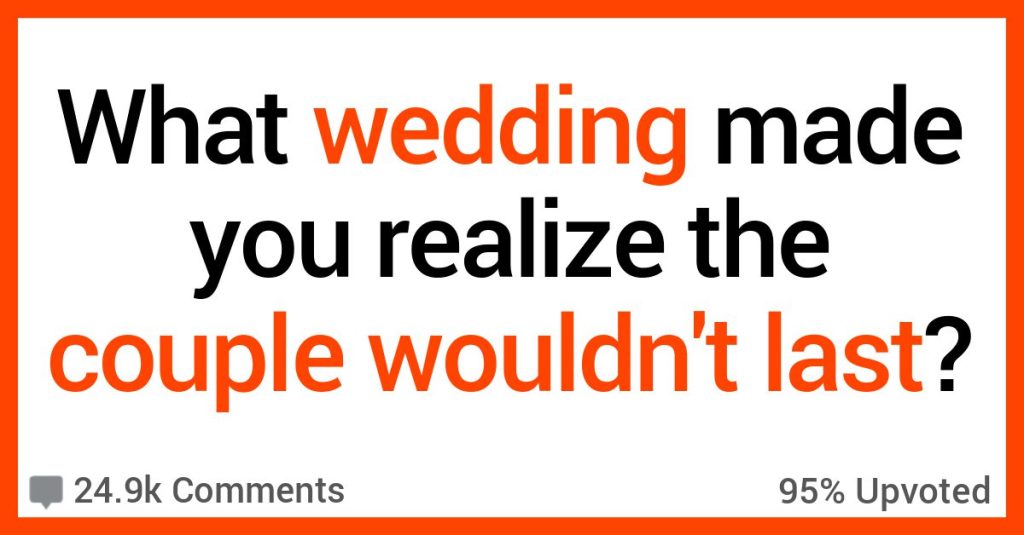 I went to a wedding once and I just knew…I KNEW!

What am I talking about?

Let me clarify: I knew that these two people weren’t necessarily compatible and that the marriage wasn’t going to last.

Is that clear enough for you?

What wedding made you think the couple wasn’t going to last very long?

“When my sister married her first husband she mouthed to my father walking her down the aisle “I can make this work, right?”

They were divorced 6 months later…. my whole family knew it wasn’t a good idea since the original engagement a year prior…”

“My uncle when he broke his neck trying to breakdance at his bachelor party.

He went down the aisle in a wheelchair. She divorced shortly after.
He can walk again now but because of his surgery he cannot turn his neck.

One of my go to stories because it’s f**king insane.”

“The bride had a bruised eye covered by make-up.

Also it was visible that walking was hurting her. I might think it was because the corset was pushing on broken ribs.

Took her 3 years to run away.”

I think my favorite moment was when I was sitting at the miscellaneous table with all the randoms and the girl next to me, the grooms ex, dr**kenly admitted to sleeping with the groom a few months prior”

“I was at a wedding when a phone went off during the ceremony.

In the middle of exchanging vows.

It was the grooms.

He took the call.

They are divorced now.”

“When the bride tried to playfully feed the groom some cake, pulling it back once it got close to his mouth. The third time she did this, he slapped it out of her hand and stormed off.

In the ensuing awkward silence and wide-eyed staring, we all knew it wouldn’t last.

Surprisingly, they were together for nearly two years before the bride eloped away with her step-brother. No one saw that coming.”

“One of my friends got married, afterwards she looked at me, crying, and said ” what did I do? “.

They were separated by the time the plane landed from their honeymoon. He was a good guy, she was a mess.

The beta fish in the flower centerpieces lasted longer than the marriage.”

“Prior to my wedding I’d asked my husband to practice dancing with me because I’m uncoordinated, due to a disability.

He blew me off and said we’d be fine. As we were dancing, he spoke in my ear, not even quietly. “What are you doing? What’s wrong with you? You’re embarrassing me!!”

We lasted 2 years. Leaving was the best decision I ever made.”

“He got so f**ked up at the reception he had a fist fight with her cousin in the toilets over co**ine.”

He told all the other cousins to f**k off. He hit on my aunt.

He told my cousin’s child to come back to him when she was 15/16. And he forgot to bring his child to the hotel.”

“When they got married illegally in high school.

Two 16 year olds from different states who had to lie on their certificate to get approved by the state.

It was annulled when the father of the groom found out.”

Throughout the exchange of vows, she was looking at everyone but my brother, making sure all eyes were on her. Later, she instructed the photographer (a family friend who was cheap) to “mingle” and get shots of people “being happy”.

Within 10 minutes, she’d summoned the photographer back shouting, “Whose wedding is this?! I meant get shots of people being happy for me.””

“The bachelor party and the Bachelorette party were in Vegas at the same time. Across the hall from each other.

The bride and groom got in a huge fight on the last night of the trip and when I was leaving I said “I’ll see you guys at the wedding” to the groom and he replied “I’m not sure there’s gonna be one.”

There was a wedding, but they were divorced within 18 months I believe.”

We’ll start three days before. The wedding was a ren-fair style wedding outside at a large gazebo and the Maid of honor had promised to purchase a stylized dress for my bride that they had agreed on. THREE DAYS before the wedding she calls to tell us she had no money and was embarrased to admit it….so we literally hand-sewed ont together in 24 hours. IMO it turned out pretty nice for what we had…

Brides mother was supposed to pick up the cake in ATX and drive an hour south for the wedding. She left her house 30 minutes before the wedding to pick it up. When she finally showed up (hour late) the cake was DESTROYED….she put it in the back seat and drove like hell all the way down, just slamming it against box with every turn.

During the one hour delay, there was almost a fist fight between two groomsmen because….well the MoH showed up, IN THE DRESS THAT SHE WAS ‘UNABLE TO AFFORD’. Obvious attempt to upstage the bride. The same MoH during her speech after the ceremony started it of by saying ‘When we all met, I did not like Drakkarim411 at all, however I found that he grows on you…like a fungus.’

Needless to say my entire side of the family was super cold to all of this.

Since all of these issues were on her side of friendships or families, I was told to suck it up and we’ll discuss later. I sort of assumed that a lot of these ‘friends’ had just shown themselves the door. Quite the opposite. In fact, two years later when I accepted my first well paying job out of college, it became an issue that it was an hour and a half out of Austin…so she decided to just stay in ATX to be with her friends.

…I mailed her the divorce papers and since she couldn’t be bothered to even show up to the hearing….I’ve never seen her again.”

Have you ever been to a wedding where it seemed like the couple was doomed?