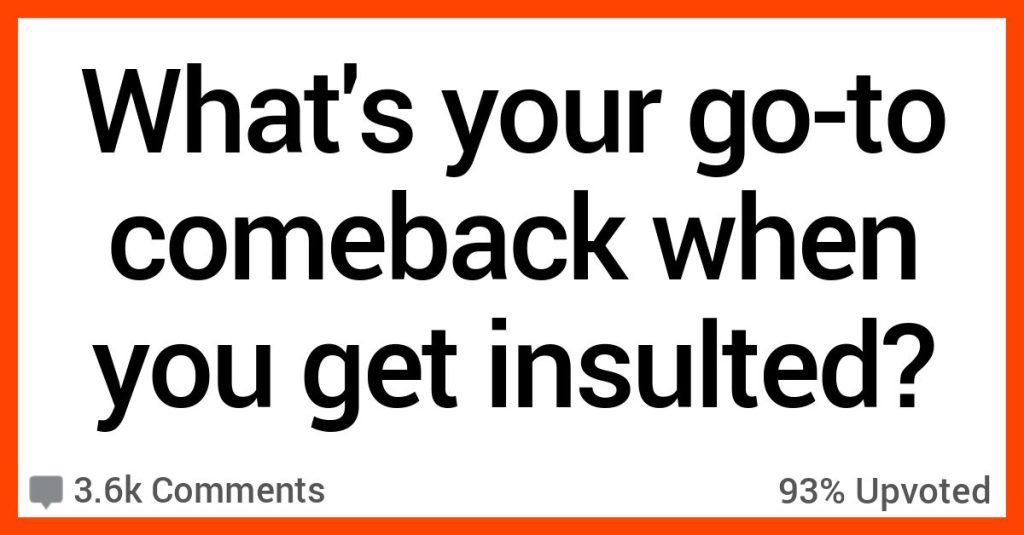 Listen, if you don’t hit somebody with a good comeback after they’ve put you down, you know you’re gonna get down on yourself and start second-guessing your entire life…

Or, at least that’s how I’d react…

That’s why you gotta have some good ones in your arsenal!

What’s your go-to comeback when you get insulted?

That’s what I do.

Insults only have validity if the issuer thinks it worked.”

“I start to insult myself.

It decreases their satisfaction.

Works every time, plus you can also kamikaze.”

Well, the jerk store called and they’re running out of you.”

“I was getting slammed at work. Got quadrupole sat at my restaurant on a very busy Saturday night.

My fingers are shaking at the POS trying to ring in orders. Another server (the fun outside of work, obnoxious at work type) said, “hey is it weird that you’re a terrible server?”

To which I replied “is it weird that your parents are related?” Without looking away from the screen finished my orders and left the kitchen while all the cooks laughed at him.”

“Expose them about something they claim to know/be a part of.

Catch them in a lie or just set them up to make themselves look foolish.

The insults won’t matter as much as the realization that they are lying phony losers.”

“I don’t get insulted often but the odd chance when it happens I say ” God Bless You”.

It either enrages them or they look confused for some reason.”

“Your birth certificate was a written apology from Trojan…”

And then making them explain it in plain words.”

You got anything else or was that it?”

“My best line to not only give them a blow to the ego, but also give me a nice opportunity to insult them further by walking away, is saying “You don’t win often, huh?” with a smirk and then I walk away.”

Works in every situation.

They are expecting a reaction and if you don’t give them one they move on.

Or what I love to is just stare into their eyes with a deada** look then look away.”

For example my brother likes to give me s**t about my social life not existing and my lack of sporting participation.

But he has really bad acne on his forehead. So any time he takes a shot at me I just tell him to use a sanding block on his face so it doesn’t look like pus-filled Braille.”

“Every one who has ever loved you was wrong”

“You need to go home and think about everything you are. Then change it.”

“It is impossible to underestimate you.”

“Bob Ross would call you a mistake.”

“I don’t respect you enough to be insulted by you”.”

What’s your comeback when someone talks some trash to you?