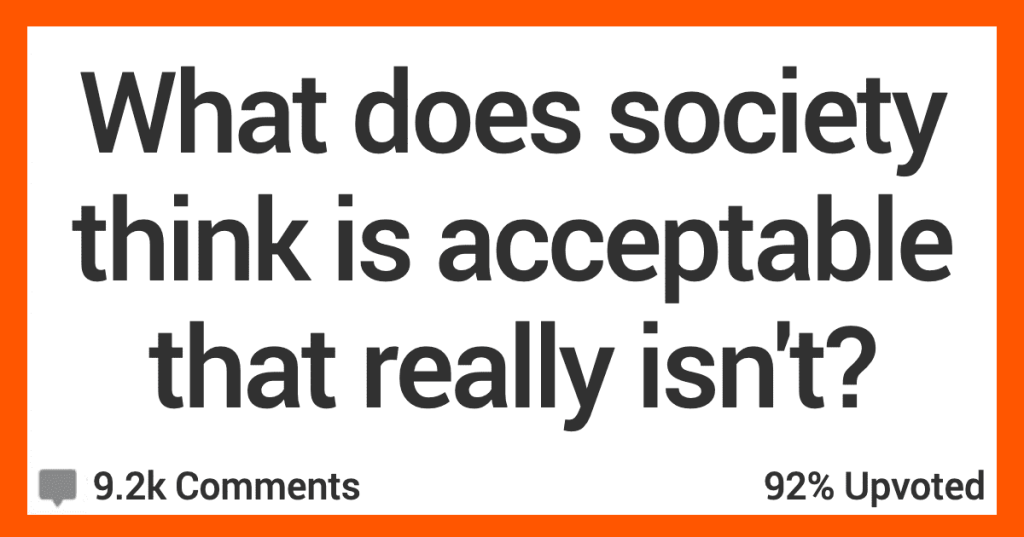 Some things that are dangerous, harmful, and downright terrible are just accepted as normal because…that’s the way it is.

Yeah, it can be infuriating!

What does society deem acceptable that really shouldn’t be?

“The giant slits in bathroom stalls.

“U.S. residents needing to figure out their own taxes and being penalized if it is done incorrectly.

Just send me a bill.”

Become informed on the issues and where your local officials stand on issues that actually matter.

It’s literally not and I work so hard to make sure my animals have a balanced diet and maintain a healthy weight and activity level.

Yes they can be cute, but past a purely shallow look, it’s so unhealthy and cruel.”

One use plastic and paper everything. And plastic film or plastic shells containing paper wrappers and boxes that hold our products.

“The price of insulin in the US.

And the price of medications in general in the US.”

Jobs are supposed to be payment for work, unpaid overtime is a complete betrayal of that.”

“Expecting teachers to work extra hours every day and not be paid for it.

I once booked a hotel in the Chicago area without knowing there was a child beauty pageant going on. I went to the show out of general curiosity.

I left 15 minutes later feeling disgusted not only with the event, but myself. You have to suppress some sick thoughts to tell yourself, “Yes, this is okay.””

“Expecting an 18 year old to know enough about life to decide what they want to do for the rest of it, only to turn and try to scam money our of them for bulls**t degrees at every turn.”

Working yourself into an early grave in hopes of living comfortably is just a horrible prospect.

There’s more to life than getting rich and it’s already k**ling Japan.”

“Women slapping men during an argument.

It’s heavily referenced in movies and TV shows as women being “fiery”, whereas whenever a man slaps a woman during an argument they’re absolutely reamed for being a**sive.

In my opinion, society accepts women hitting men because society views women as weaker – it tells men “it’s okay if a girl hits you because it’s gonna be a soft little girly hit and you should take it like a man!” when in reality women can easily hurt and a**se men.

Women can be ab**ive too. If you slap your partner during an argument REGARDLESS of gender then you’re being ab**ive, full stop.”

Just watch any reality show, the main premise of the show is to get as dr**k as possible, start drama, have s** with someone, pass out, then do it all again the next day.

This is supposed to be the dream lifestyle everyone is trying to achieve.”

What does society deem acceptable that you have a problem with?