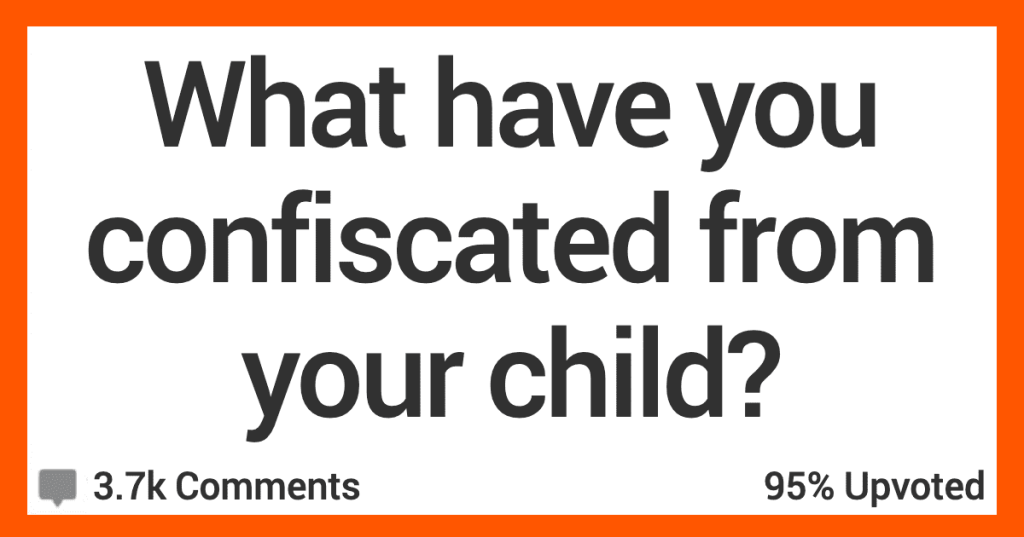 I didn’t have the kind of parents that went snooping through our closets and drawers, but I sure had some friends whose moms and dads were like that.

And they got caught with all kinds of stuff when we were growing up!

And I just watched from the sidelines with a grin…come to think of it, that probably wasn’t very cool. But they got caught and I didn’t!

Let’s hear from some parents on AskReddit about the worst things they ever confiscated from their kids.

“My daughter decided that she likes the taste of spiders for a while, so we had to keep her away from spiders other wise she would eat them, those were fun times.”

“Used condoms stuck to the wall behind his TV.

I still don’t know how they got there.

“My two year old ran up to me with a small tin she found on the playground.

“When my eldest was tiny and in the ‘put all the things in my mouth’ stage, we went to a park and he was constantly putting the larger wood chips in his mouth.

I put him on a large wheel/swing thing he could walk on, there were a couple wood chips and of course he beelined it when he saw them. I turned the wheel and when he got back to me I fished the woodchip out…

“My car keys, a usb charger, and some change in my 2 year old’s little backpack (she was planning an escape I guess).

I couldn’t drive my car for a week and had been just about to tow it to the dealer to have a key made. Little s**t.”

“My young son was just crawling, and one time I saw he had something in his mouth.

He was reluctant to give it up, but I sideswiped his mouth just like on a puppy. Finally spat it out – a large shard of glass.

Absolutely no idea where it came from or where he got it.”

“When my daughter was 5 (she’s 16 now) I found dozens of peach pits when I cleaned her room.

They were hidden in various places. It was so bizarre.”

“I had to take an axe off my 6 year-old daughter because she was fed up with having two brothers and wanted to get rid of one so she could have a sister.

“A crown of a tooth from an unknown origin.

Was looking at my daughters rock collection with her that she had in a box in her room and realized I was holding some rando tooth in my hand.”

“The worst things were the things we missed with our youngest daughter.

Things like 3 d**d frogs or lizards in her pants pockets, usually found when checking pockets before laundering.”

“When my daughter was around 5 I found pumpkin carving supplies from a kit and a hammer hidden in her room.

When I asked her about it she said it was “for protection in case bad guys break in.””

“Double edge razor blades come in a funky little dispenser. The fact that you can slide out a razor blade and the next slots into place ready to slide out is endlessly fascinating to a 2 yr old and absolutely terrifying to myself when I walked into the bathroom and found him surrounded with razor blades.

I had bought a 100 pack which was 10 packs of 10. He had taken out the blade. Unwrapped ‘the present’. Then moved onto the next blade from the magical dispenser of presents.

Amazingly, not a single nick on him. Locks on drawers after that.”

Have you ever confiscated something bad from your kids?