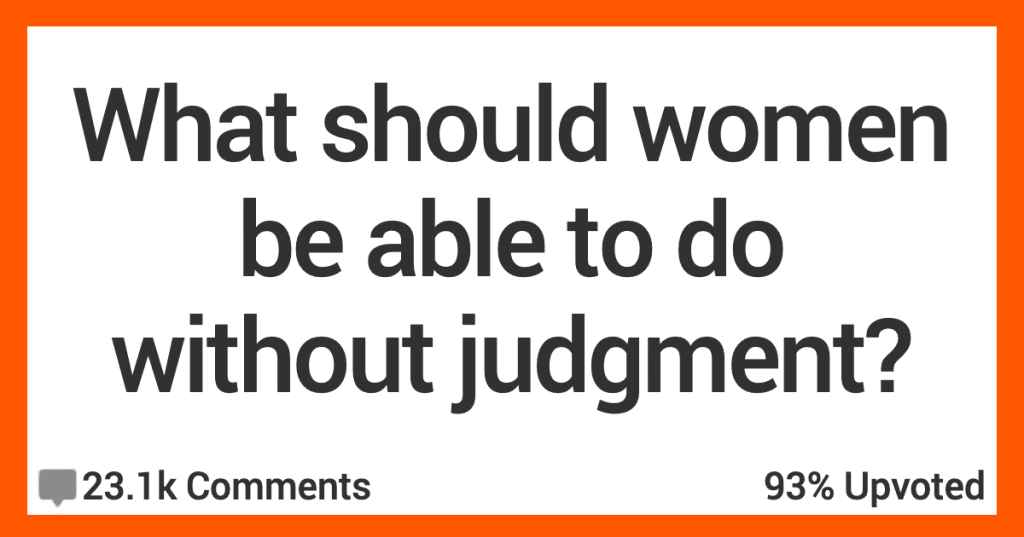 You know what I say?

Do whatever you want!

As long as you’re not hurting other people, then what’s the harm?

And that goes for men AND women, by the way.

Now let’s see what AskReddit users had to say about what they think women should be able to do without being judged.

“Ask for a pad or tampon.

“YOU SHOULD KNOW WHEN YOU’RE GOING TO HAVE YOUR PERIOD?!”

I was a kid. And it was not regular by any means.”

“Decision to have kids or not.

Every woman I know who says they don’t want kids gets ‘ you’ll grow out of it’ and ‘you just haven’t me the right man yet’.

I dated a girl who farted one time in front of me and started crying because “it’s so gross”.”

It sucks so much how women are pressured into being physically appealing, as if their whole life should revolve around that.

And then big companies and media make a profit out of selling young girls all those freaky and sometimes dangerous ways to “become beautiful”.”

“Just any stigma about makeup.

Too little, too much—it’s a fight you can’t win.”

I’ve been losing my hair a lot lately, and my bf was like ‘women don’t go bald.”

Yes, yes, they can. It just doesn’t happen as often.”

7. Nothing wrong with that!

I, for one, embrace the hallmarks of age.

When people bring it up, I tell them that getting old is the privilege of the lucky.”

Especially when you’re older and single.”

“Not smiling all the time.

I had a customer at a restaurant that I was working at as a waitress tell me that I needed to be happier and smile while i was waiting on his table and I broke out crying and let him know that my uncle just passed away that day and walked off crying.

A coworker had to take the rest of my tables. (My uncle really did pass I just thought that I could handle going in to work but I was wrong). People never know what someone is dealing with.”

“Be comfortable in clothing.

I’m a guy and I mostly go after comfort and keep it reasonably fashionable ie. Plain Tshirt, track or jeans and a pair of sneakers and you can basically wear that anywhere to everything and look decent but from what I have experienced through SO’s or family and friends is just that being comfortable and fashionable as a lady…it’s a bit harder.”

I’m a 32JJ and cannot do anything without being s**ualized. I am regularly followed out of the gym by creeps or have things shouted at me walking down the street.

It’s a genuine concern for me that my future career will be affected by the fact that my academic achievements are often overlooked because I’m just known for having big b**bs.

I almost feel pressured into getting a reduction that I don’t want, because it would make life easier.”

“Getting angry because of very understandable things, without getting called bossy, bi**hy, being on our periods, being called difficult or crazy, or gaslighting.”

“Whatever we want to do…

I fail to see why people think it’s justified to judge let alone insult me and so many others based on absolutely normal things.”