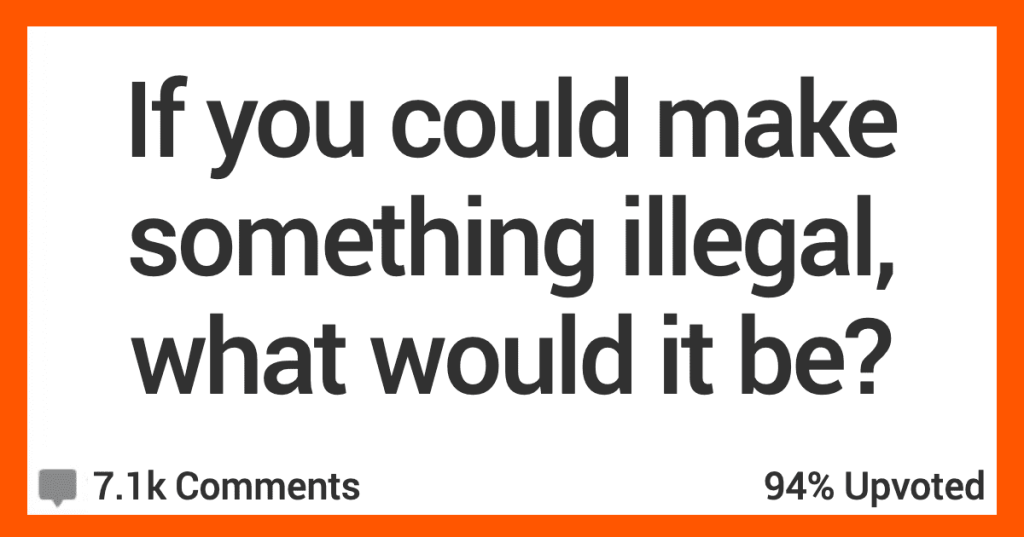 13 People Share What They’d Make Illegal if They Could

We’ve all had fantasies about wanting to make certain things illegal, right?

Or is that just me…?

Either way, we’re about to hear from AskReddit users about what they’d make illegal if they had the power.

Take a look at what they had to say!

1. Who’s responsible for this?

“Websites with those stupid videos that stay open in a floating window when you scroll down below the main video.

Seriously, who thought those were a good idea?”

I’d like to get to work without having a heart attack on the way.”

I h**e the kind where unless you have dainty fingers you get redirected to a website.”

Think of all the “You’re pre qualified for a credit card!” mail people get and how much of that goes straight in the trash.”

“Politicians buying/selling/trading stock while in office.

Honestly, politicians receiving any kind of additional income or donations, monetary or otherwise, while in office.

No stock trading, no second job, no donations to their campaign fund, no gifts from supporters, nothing. If you work in government, and have financial ties to other entities, then your loyalty is being bought, whether consciously or not as you will use your power to support your other forms of income in the name of self interest as to ensure to still receive those forms of additional income.

A politician’s only form of income or compensation should be via taxpayers from the people they represent.”

“I would make it illegal for recruiters to not give some kind of response after applying for a job.

I used to work midnights and I can’t tell you the number of restaurant doors I’ve pulled on at 1 am because their sign said they were open. If I were King of the world restaurants would be fined $1000 an hour for allowing this to happen.

I’M LOOKIN’ RIGHT AT YOU Steak-n-Shake!”

S**t costs a ton of money to pay people to fish them out and repair them, and they’re terrible for ecosystems.”

“I work at a grocery store.

Leaving carts in random places or putting the small carts with big carts and vice versa.

It’s so f**king annoying to sort all the carts together and THEN take them in.

It also wastes time while carts are disappearing inside and I’m stuck outside sorting them.”

I don’t understand how it’s not considered a crime against humanity.”

Make a skip function mandatory, and a maximum 3 seconds before it let’s you skip it.”

What would you make illegal if you could?