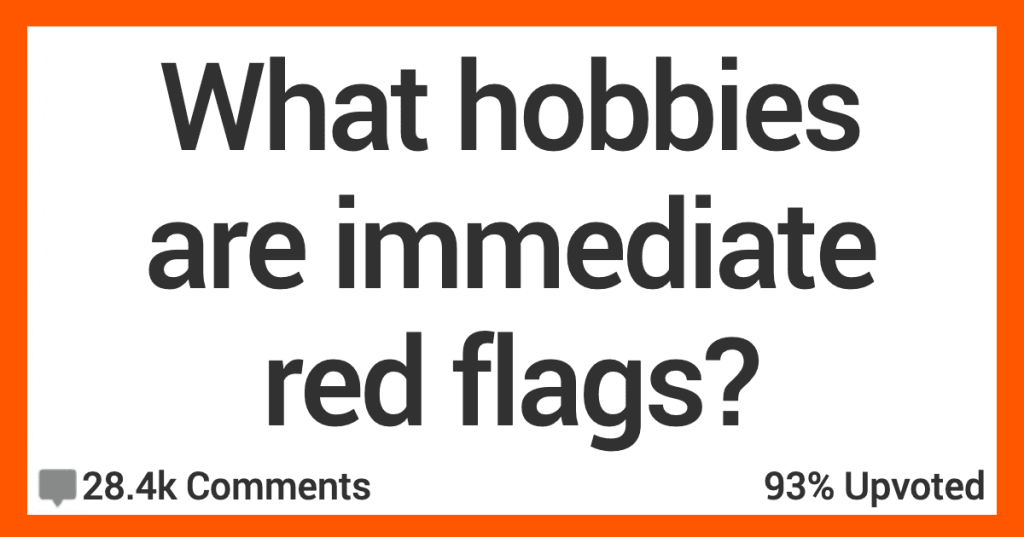 13 People Talk About Hobbies They Think Are Big Red Flags

Can a person’s hobby be an alert for a red flag?

I’ve never really given it too much thought, but I guess the answer is YES.

Or, at least that’s what these AskReddit users seem to think.

“I saw a post yesterday here about a guy that uses real mouse hearts and testicles and places them in a clear resin cast Lego man.

I dont know what that is, but red flag.”

Especially when you can’t afford them.”

From living in Vegas I see the pattern of people having a bad poker night and then going to “less skill oriented games” to make the money back.

My friend had one next to his table next to his AC unit. When I asked him about he gave me this weird smile and claimed it was for work.

I never had beers with him since.”

“If a person is so preoccupied with their social media that this person hasn’t has time to actually live and communicate in the moment.

It’s fine if you can communicate about it and make arrangements. But I am not dating a person in a three way relationship with Zuckerburg.

I would be totally fine with a person that has to have a heavy social media presence for work. But I would want to be able to set boundaries that work for both on us on it.”

Using kids to shore up your own online presence is not ok.”

They were called commercials. Then infomercials, then the s**t became ridiculous.”

“I have dated two “horse girls” in my life and both ended up very similar.

“Arguing with strangers on the internet.

Not like usual discussions or anything, just taunting people because you’re bored.”

I dated a girl in L.A who had taken part in beauty pageants going back to when she was a kid. She had a good amount of success with it and she was most certainly a looker, but man she was completely crippled with anxiety.

Those pageants f**k the girls up that start young.”

“Met an Uber driver that told me he did taxidermy for fun….”well, not really taxidermy. I just kind of pickle animals organ and you wouldn’t believe the market for it…I’ve made 35$ this month alone”

Never been so creeped out in my life.”

“When their only hobby seems to be consuming and repeating hyper partisan media talking points.”