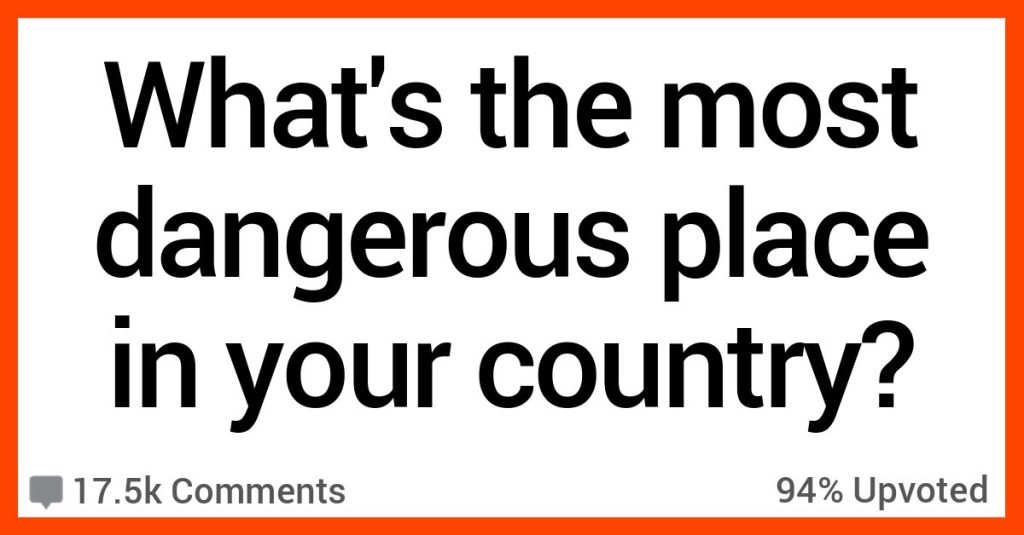 13 People Talk About the Most Dangerous Places in Their Countries

I’m fascinated by other countries…especially when you get to see the seedier sides.

Because we usually only get to see the tourist spots and the glitz and glam around the world.

But today we’re gonna talk a walk on the dark side.

What’s the most dangerous place in your country?

Late night at Delhi is dangerous. A politician’s son will r**e you and you won’t get any justice.

High court and even supreme Court don’t give a f**k because money talks.”

There is a street called Hero Street.

Quite ironically you would have to be either an idiot or a hero to go through it if you don’t live there.”

The vast Highland plains up north. The altitude is high enough to be above the treeline, but the mountains are relatively flat from millions of years of erosion. This leaves little protection from winds and rain. Also when the mist comes you have little chance of navigating without a compass.

Or the glaciers of the far north. Some of the cracks can be over 30 meters deep, slippery, and worst of all shifting. The glacier is under such pressure from its own weight that the ice is semi liquid. The crack could therefore slowly be closing in on you. Sadly the glaciers have been getting considerably smaller in later years.”

“As a Mexican I can say that every road outside the limits of a city are a dangerous place, specially countryside roads.

One can easily be attacked or shot at by simply having a nice car, the better the car is the more you want to avoid those places.”

“As a one time expat in Singapore, I can’t think of any place that is truly dangerous (in the American sense).

The only place that comes to mind is the Orchard Towers area, and that is because of d**nk Australians or Brits getting into pushing matches over dumb s**t.

In the process your drink could be spilled…that was probably my only concern in Singapore.”

“I’d say Helsinki Central Railway station in the middle of the night is probably one of the most dangerous places in Finland.

I’m from Eastern part of Helsinki, which has pretty bad reputation itself, but only problems I’ve had with other people were at Central Railway station after midnight.”

“I had to make several trips to West Baltimore for work about 5 years ago.

Saw a body on the sidewalk the second day.

That place changed me.”

“Ireland; some would say Belfast.

It’s been called the “terrorist capital of Europe” because we’ve had a lot of issues with sectarian and Unionist vs Republican v**lence. As far as I know it has calmed down in recent years though and that title is definitely hyperbole.

I’d say the d**dliest place in Ireland today is on the road. We lose a lot of people every year to RTA’s and not just d**nk drivers.

I’m not sure if we’re just terrible at driving or if it’s something to do with how we build or maintain our roads but it’s frequently the biggest k**ler.”

One of them had guys walking around with machetes attacking random people.

Recently one got done by a counter group of vigilantes who cut his hand off with his own weapon.”

Also random roads in the mountains where cars are burned & people are k**led.”

“Iceland – a lot of places.

Search & rescue are a busy bunch in this country. Mostly rescuing tourists that don’t know better.

If you come here and plan on hiking for example, please be careful and do your research.”

They’re all full of mines and you should never go without experience or someone to guide you.”

Grew up there for 20 years. Last five of them there was all sorts of insane activity. I lived on the nicer, quieter side of Canterbury Road (which is the main that runs through both areas) and it definitely got more dicey as the years went on, from late 90s and into the middle 2000s onwards.

Sadly, in streets nearby were many shootings. Ears or knees being blown off, m**ders. Lots of gangs and drugs. People defend it and I don’t know why. I love it, and I love the memories of my childhood, but after being followed home from Riverwood countless times, and the sheer amount of drugs and gang activity that DOES operate there, and has not improved, it’s a BAD place. I would always deter people from moving there.

There’s lots of factory spots where people meet to do shady s**t. I had a cop pull me up on a main strip years back (roll out of a factory driveway and obstruct me from passing) as I was visiting my family house to pick up some clothes (I’d just moved out of home to the inner city) and there he is grilling me, asking me why I’m in the area, what I’m doing.. I was perplexed as f**k as I was literally a five minute walk from my house around a corner.

Find out after reporting him to the most local station and receiving a call from a Sergeant, that hookers were known to frequent that spot for s**/drugs. AND that they were looking into that officer as he wasn’t in his jurisdiction and they weren’t sure what was going on there.

I was a very innocent 20 at that time, and simply because I was walking down the street on a hot day in a sun dress I was pulled up and interrogated. It was very scary at that time, but portrayed exactly the kind of lives being led around the area, the stories and realities that were going on, unbeknownst to regular people like myself and my neighbours.

As I understand, they have tried to improve some of the areas around Punchy station, but it’s still a hole. Too many enclaves of rival families and sinister people. It’s dangerous AF and you wouldn’t walk around after dark, especially as a young woman on your own. Maybe there are other ok parts of it, but on the whole, nope.”

Tell us about the most dangerous places in your country.