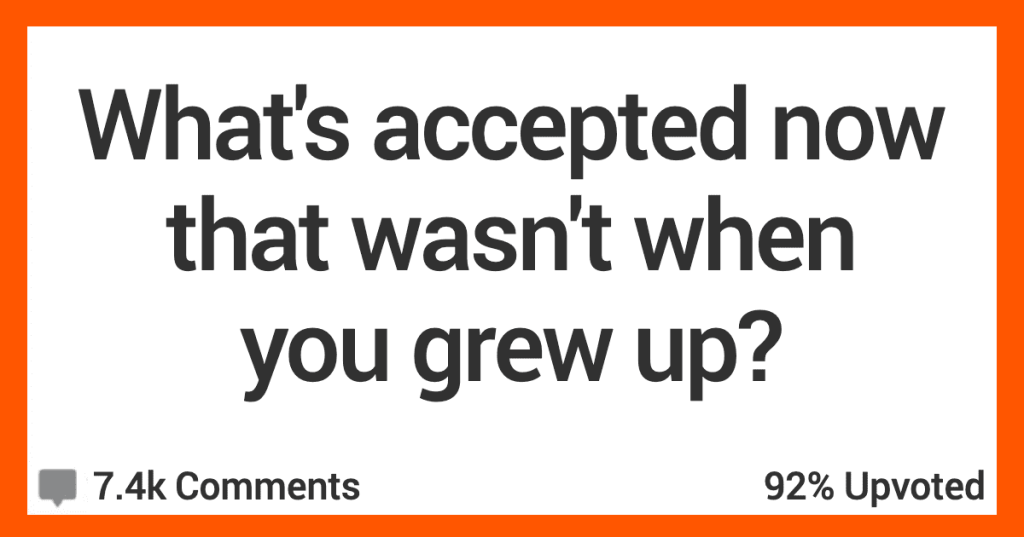 Times change and, even though it feels like our society is moving backward sometimes, it really isn’t.

We still have a ton of work to do, but things have gotten a lot better for a lot of people and hopefully, we can keep moving in the right direction.

What do you think is acceptable now that wasn’t when you were growing up?

“In 6th grade I used a color applicator (it was like a mascara wand) to put blue streaks in my hair, with full permission from my mother.

At school they sent me to the nurse’s office and made me wash my hair in the sink.

Body autonomy was not really a thing even as recently as the late 1990s.”

My Dad was a suit and tie guy. So were most of my uncles. Hell, I had button ups and ties are my first couple of jobs. Now it’s jeans and no tie, colored button up shirts, and tattoos are okay.

The feel of how an office runs is vastly different than it was 30 years ago.”

“Fathers taking care of their children.

When I grew up it was more acceptable for a Dad to hand off their baby to their 8 year old niece (me), than to change a diaper.

Also god forbid a child was naked around a man, that was taboo.”

4. Definitely in some places.

I was in one in the early 90’s and we ended it based on the pressure we got from everyone. My family disowned me.

I am glad to see people can love each other openly as a normal family without people harassing them.”

“Going to thrift stores. It used to be a bit embarrassing and something to hide.

“Declawing cats has only become unacceptable in the past 5 or 10 years.

My wife got her cats declawed about 8 or 9 years ago and the vet clearly didn’t tell her what the surgery actually entailed otherwise she would have been abhorred and not done it.

Now vets are all anti-declawing as if they weren’t the ones pushing it in the first place.”

7. I love this description.

Cool young people are wearing them now, where as you were the crustiest Walmart creature for wearing them 10 years ago.”

“Being into nerdy activities is now cool.

Like if you even openly liked Nintendo you could get beat up.”

“Acknowledging that people older than you are wrong.

Also, deciding not to listen to an elder that gives you bad advice.”

“Politicians acting like they were raised on the Jerry Springer show.

Even if they didn’t agree they could at least be civil.

Now it’s a white trash free for all.”

The internet makes it easy but selling seminude snapshots of yourself in the 1980’s would have been super weird.”

We used to throw them into institutions when they became adults and shame them for being crippled. Now there are tons of autistic adults in the world, both diagnosed and undiagnosed, that aren’t in institutions.

We still have a long way to go, though.”

It was only associated with criminals and “losers”. Now that its legal in my country alot of everyday working professionals admit to its usage.

Then there is all the perceived benefits of CBD for pain relief as an alternative to Ibuprofen or harder stuff.”